The Chicago Bulls win games with heart, hustle and one of the best defenses in the NBA. Is that enough to win in the playoffs?

Bulls at a glance

The Chicago Bulls were 14-18 on the cold January night they decided to trade away Luol Deng. The Bulls were fresh off a 5-10 December that saw them lose to sub-.500 teams like the Bucks, Pistons, Knicks and Magic. Injuries were starting to catch up with Jimmy Butler, starting point guard Kirk Hinrich was shooting just 34 percent from the field and a team that prides itself on always having "more than enough to win" didn't look like it had the talent to make a second straight run to the playoffs without Derrick Rose.

So much for that. The Bulls have the best record in the Eastern Conference since trading Deng and may be more formidable than the team that reached the second round a year ago. They're doing it all without a player averaging 15 points per game. How did this happen?

It starts in the middle with Joakim Noah, who has ascended from a borderline All-Star to a player in the conversation for the best all-around center in the NBA. Noah's combination of guard skills on offense and elite interior defense makes Chicago a tough matchup for anyone. He's the first player to average his current statistical plateaus of 12.5 points, 11 rebounds and five assists since Kevin Garnett did it nine years ago.

Coach Nick and K.C. Johnson assess the Bulls' chances of advancing in the playoffs

The signing of D.J. Augustin did wonders, too. The 26-year-old was the fourth-string point guard on the Toronto Raptors before Tom Thibodeau turned him into the speedy floor general the Bulls desperately needed. Augustin averaged 16.8 points and 4.2 assists on nearly 46 percent shooting from the field over a difficult March stretch that saw Chicago defeat the Rockets, Heat and Pacers. The Bulls are still among the worst offensive teams in the NBA, but upgrade in tempo and shooting range Augustin provided has been immeasurable.

The other big difference? Health. If you discount Rose, Chicago is about to enter the playoffs with a much cleaner bill of it than they had a year ago. Armed with a top-two defense, a star center and one of the league's best coaches, the Bulls are a team no wants wants to see in the playoffs.

A hot dog without the hot dog

A hot dog with a quality, well-cooked wiener and all the fiiiiixins is a championship-level meal. But when you shop for a barbecue, you inevitably buy more fiiiiiixins than dogs and you end up with a surplus. Here's the thing, though: A creative hot dog maker with enough good fiiiiixins at his disposal can still make magic sans meat. A hot dog bun stuffed with cheese, onions, relish/pickles, sauerkraut and whatever other vegetables and sauces you can find won't do the job of a hot dog, but it's still pretty damn good. The person able to create such a solid snack without the crucial ingredient (on multiple occasions!) is to be commended. 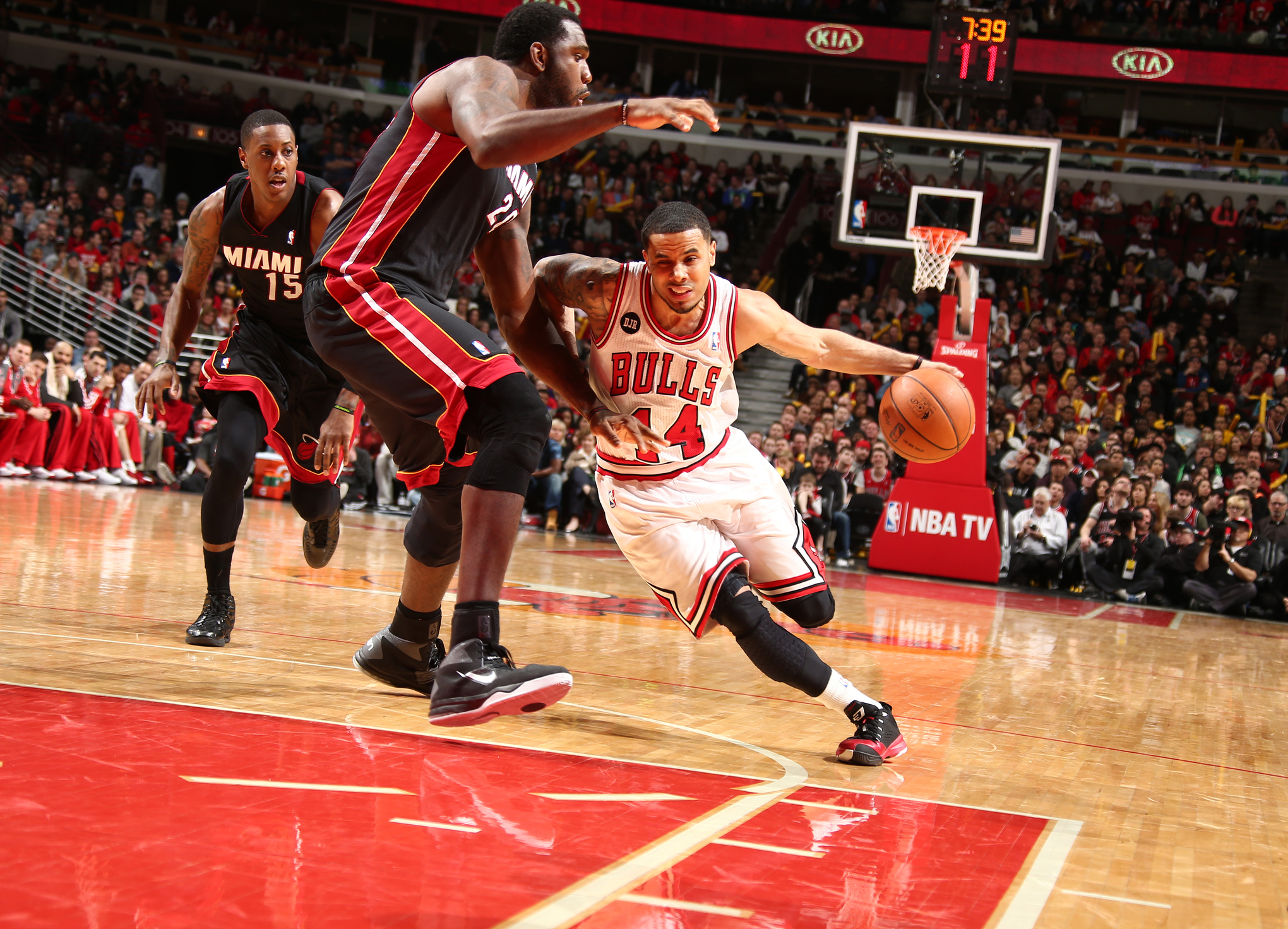 Last season, Nate Robinson single-handedly won games with his clutch scoring. Robinson wasn't retained due to the return of Derrick Rose from a torn left ACL, but when Rose tore the meniscus in his other knee, Chicago needed help at the point guard position.

your friendly BullsBlogger •Blog a Bull

Enter D.J. Augustin, who struggled with the Pacers last season and was waived by the Raptors earlier this year after failing to find a role. Augustin has become the latest undersized score-first guard to thrive under Tom Thibodeau, resurrecting his career thanks to an excellent season. The 26-year-old is leading the Bulls in scoring since signing in mid-December and he's shooting over 40 percent from three on the year. If Augustin can replicate some of Robinson's postseason success from last year, Chicago could make a deep run.

The grinding Bulls are the most defensively skewed team in the playoffs. Chicago is the second-best defensive squad in the league ... and one of three worst offensive teams. That famous Tom Thibodeau resistance has worked to perfection despite the midseason trade of Luol Deng and the loss of Derrick Rose. The Bulls rank near the top of the league in all-important shooting defense and foul rate. They also rebound well and do a fair job creating turnovers.

But, yikes, that offense. Chicago is the worst-shooting team in the entire league. A league that includes the Bucks, Sixers, Jazz and Celtics. The Bulls also have persistent turnover problems. Thankfully, some relief comes on the offensive glass and from the free throw stripe. Just be forewarned that a potential Chicago-Indiana series could result in a series of 70-66 scores.

Our resident coach's scouting report on how to stop the Bulls.

This is a favorite set of the Bulls when Taj Gibson is in the game. Chicago sometimes uses it with Carlos Boozer too, but Gibson is the more frequent target.

It begins with Gibson setting a high pick for the point guard to go one way. As soon as that happens, he'll then cut towards the baseline, where two wings are ready to give him a staggered double cross screen to get open on the opposite block. As this is happening, the guard comes off the other big man's screen to create the perfect passing angle to find Gibson. If Gibson isn't open, the first of the two wing screeners is simultaneously coming off the other big man on a down screen to pop open at the top of the key.

ROOT FOR THE BULLS BECAUSE...

The Bulls will give you whatever they have. That's not just effort during a game: it's a system ran to its fullest through intense preparation and an unmatched focus. Things don't always go well, especially offensively, but the Bulls are confident that if they play their game, they can win. And rightfully so, as they've won the third-most games in the league since the calendar changed to 2014.

And all that is admirable, but what makes them fun is that they're led on the floor by Joakim Noah, one of the most unique and entertaining stars the league has seen in a while. Noah's game is as nontraditional as his look: a point-center who can feed backdoor cutters and run the break like a guard. In the wake of the absence of stalwarts Derrick Rose and Luol Deng, Noah's not only become the team's unquestioned leader, but its main offensive facilitator.

He may win Defensive Player of the Year too, and that's still what the Bulls do best, after all. The Bulls' style of play may not always be pretty, but they can very often make their opponent look worse.

Best Case: The planets -- and the seeding -- have aligned perfectly for the team no one wants to play. After dispatching the game, but inexperienced Wizards in the first round, the Bulls set their sights on knocking off the vulnerable Pacers in the semifinals. Following six truly horrifying games only Tom Thibodeau could love, the Bulls advance with a 52-50 victory in Game 7, setting up a showdown with the Heat in the conference finals.

Worst Case: Defense and moxie only taken them so far as reality sets in that it's been three years since Derrick Rose took them to the conference finals. A glum Joakim Noah decides to wander the planet like Kane from Kung-Fu and Nikola Mirotic decides to stay in Spain.