The real test begins for the Houston Rockets

Houston's new dynamic duo of James Harden and Dwight Howard navigated the regular season beautifully except for a so-so finish. But can they lead this unique squad to postseason success?

Share All sharing options for: The real test begins for the Houston Rockets

Rockets at a glance

After picking up one of the best free agents, the Rockets came in with enormous expectations. Whether those expectations were met will be decided in the next two months. Dwight Howard has been very good for the Rockets despite dealing with nagging injuries, and the Rockets have improved in the tough West.

But this team was built to win in April, May and June. That test has yet to come.

There's no better defensive center battery in the league, which makes Houston's sub-elite defense a disappointment. But the offense -- led by James Harden, Howard and Chandler Parsons -- more than makes up for it. Howard did what he was meant to do: bolster the defense and give the team a post option. Sure, it's not a totally reliable post option, but it's a whole lot better than letting Omer Asik touch the rock.

The point guard position remains in some intrigue as Patrick Beverley attempts to return from a torn meniscus for the first round. Jeremy Lin has been pretty good, but the team loses a dimension of attack (especially on defense) when Beverley is gone. The postseason will also pose a challenge for young Terrence Jones, a man attempting to leave a mark as the team's power forward of the future.

If Houston fails, you wonder what major adjustment is next for a Rockets team with a bloated salary cap sheet and two major stars in place.

The self-checkout aisle at the grocery store.

Similarly, the Rockets cut out unnecessary midrange jumpers and only kept the good stuff: three-pointers and shots at the rim. This is why the Rockets remind me of the self-checkout aisle at the grocery store. This is also why I will only refer to three-pointers as "Little Debbie snack cakes" until Houston is eliminated from the postseason. 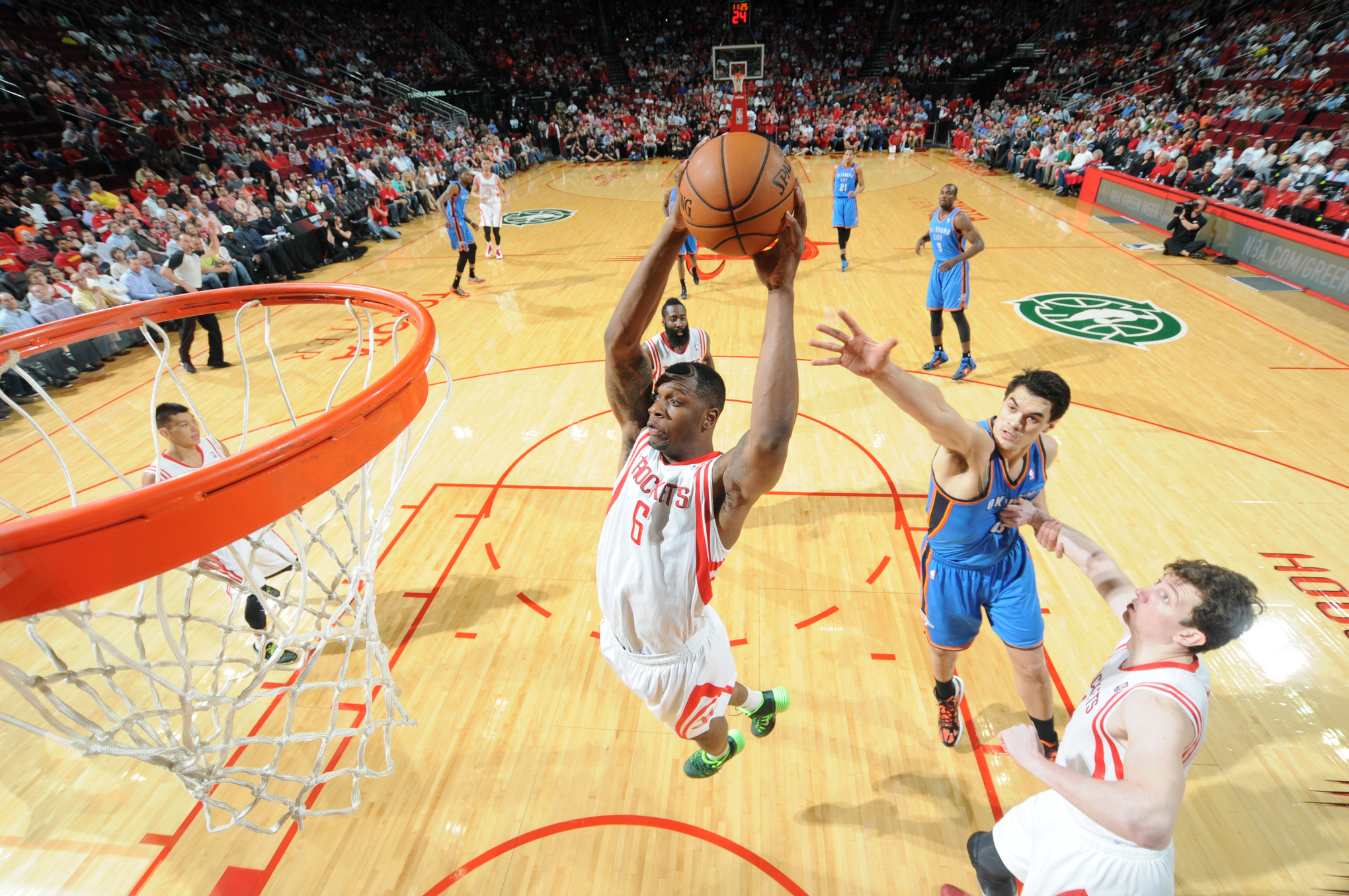 Chandler Parsons plays third wheel to James Harden and Dwight Howard, and Patrick Beverley's health will be key in the Rockets' postseason success. But the most interesting piece of the puzzle is second-year power forward Terrence Jones. The Kentucky product has grown tremendously this season and has shown flashes of being great, but it's how he fits with the other starters that makes his role all the more important.

Jones plays well off Howard by cutting toward the rim when the defense is drawn elsewhere. He can use one- and two-dribble moves to get shots off near the rim and can occasionally spot up. And he's also a big body who can hit the boards and is good for better than a block per game.

Coming into this season, Houston needed to improve its defense. So the Rockets went out and landed Dwight Howard. As it turns out, the defense did improve over 2012-13 ... a bit. The offense held steady at "awesome" too. But the basic shape of the Rockets -- awesome on offense, alright on defense -- remains.

Houston has a really strong shot defense and foul rate. But the Rockets are mediocre on the defensive glass and -- despite what we know about Patrick Beverley -- force few turnovers. On offense, the Rockets are strong everywhere but in turnover rate; Houston coughs up the ball more than any other squad in the NBA. But it also draws more fouls than anyone else. Unfortunately, a large share of them are taken by Dwight.

Our resident coach's scouting report on how to stop the Rockets.

The Rockets' offense isn't very structured, but they do have more set plays than meets the eye. This one is simple, but it can be devastatingly effective, especially when Dwight Howard is on the bench. Jeremy Lin called it his favorite set in an interview with our Coach Nick.

Ultimately, it's just a pick and roll on top that acts as misdirection, then a dribble handoff on the side. The power forward -- usually either Terrence Jones or Donatas Motiejunas -- will fade on the initial pick and roll, then dribble at James Harden (or occasionally Lin) on the right side. Harden takes the dribble handoff and always makes the right decision.

The play works for two reasons: it's executed quickly and it's always on the right side, allowing Harden to easily get middle to his strong left hand.

ROOT FOR THE ROCKETS BECAUSE...

The Rockets, with their young, fast-paced attack, are one of the most watchable teams in the league. Chandler Parsons has his dashing boy band looks, James Harden has become a lethal alley-oop partner with Dwight Howard, and Terrence Jones and Patrick Beverley's scrappy defensive approach means sparks potentially fly on any play. They zoom up and down the court, shoot a lot of threes and throw down a ton of dunks. It's a simple formula, but it's one that leads to a lot of exciting plays.

Best Case: A healthy Dwight Howard leads the Rockets past Portland in the first round and James Harden takes over in a semifinal upset over San Antonio to set the stage for a memorable showdown with Harden's former team. The author Michael Lewis sits down with Darryl Morey in the offseason to write, "Rocket Ball: The Art of Winning an Unfair Game" that focuses exclusively on Chandler Parsons and Pat Beverley.

Worst Case: Everyone's too banged up and the season ends in the first round. Morey disavows analytics and declares mid-range jump shots are the new market inefficiency.