The Portland Trail Blazers won 21 more games than last season and emerged as one of the West's top teams. Can they ride that wave to a first-round upset?

Blazers at a glance

The NBA's most unlikely contender lives in the Pacific Northwest, where the Trail Blazers were remade from a 33-win afterthought to a 54-win offensive juggernaut mostly thanks to subtle tweaks and internal improvement. Portland started the season 24-6 and has been vying for playoff position in the West ever since. Not bad for a team many thought might be in position to trade its best player before the season started.

LaMarcus Aldridge isn't going anywhere now. He's averaging career-highs in scoring and rebounding and has been the steady two-way star the Blazers needed to turn the franchise around. Aldridge came into his own playing next to Robin Lopez, the only new starter in Portland and one of the best offseason acquisitions by GM Neil Olshey. Lopez's impact isn't felt in individual statistics, but his presence in the middle has helped lift Portland from 26th in the league in defensive efficiency last year to a more respectable No. 18 finish this season.

Portland's offense has taken an even bigger leap, jumping from No. 16 in efficiency a year ago all the way up to No. 6 in the NBA. Damian Lillard has been every bit as good as he was last season as the Rookie of the Year, and he's developed a knack for hitting shots in the clutch. Shooting guard Wes Matthews has taken a nice leap forward as well, using a hot start to post a career-high in points in game this season. The starters are better, the bench is deeper, and everyone seems happy in Portland.

The Blazers were a nice story, but nice stories don't win rings in the postseason. Portland is about to face the gauntlet in the Western Conference playoffs, where the jump shots that have been falling all season are going to need to do so at an even higher rate for the Blazers to win a series or two. After a season like this, the Blazers aren't ready for it to end just yet.

No one expected Portland to be where they are today. Back in June, fans in local Portland craft brewpubs had genuine excitement about drafting and developing Jeff Withey as the center of the future. But the Blazers surprised everyone, even themselves, by getting out to a red hot start and toying with the idea of landing the No. 1 spot in the Western Conference.

The other side of the story

Breaking down the Portland Trail Blazers vs. Houston Rockets first round playoff series. What might the favored Rockets have to fear?

The other side of the story

Like the Ducks, they've gone from underdogs to champions, and there's been no bigger reason than LaMarcus Aldridge. The development of Damian Lillard -- the Charlie Conway to Aldridge's Gordon Bombay -- has been remarkable, and the addition of Robin Lopez (a Goldberg for the ages) has helped the Blazers take off.

Despite their record and ability on offense, Portland has often lost its way. The Blazers fumbled through an 8-9 March, for example. They've learned to play better two-way ball going into the playoffs, but even with their seeding, many around the NBA are unsure of their ability come Game 83.

Like the Mighty Ducks, they'll need to learn to play better than JV defense in the postseason if they want to beat the varsity squads of the NBA. 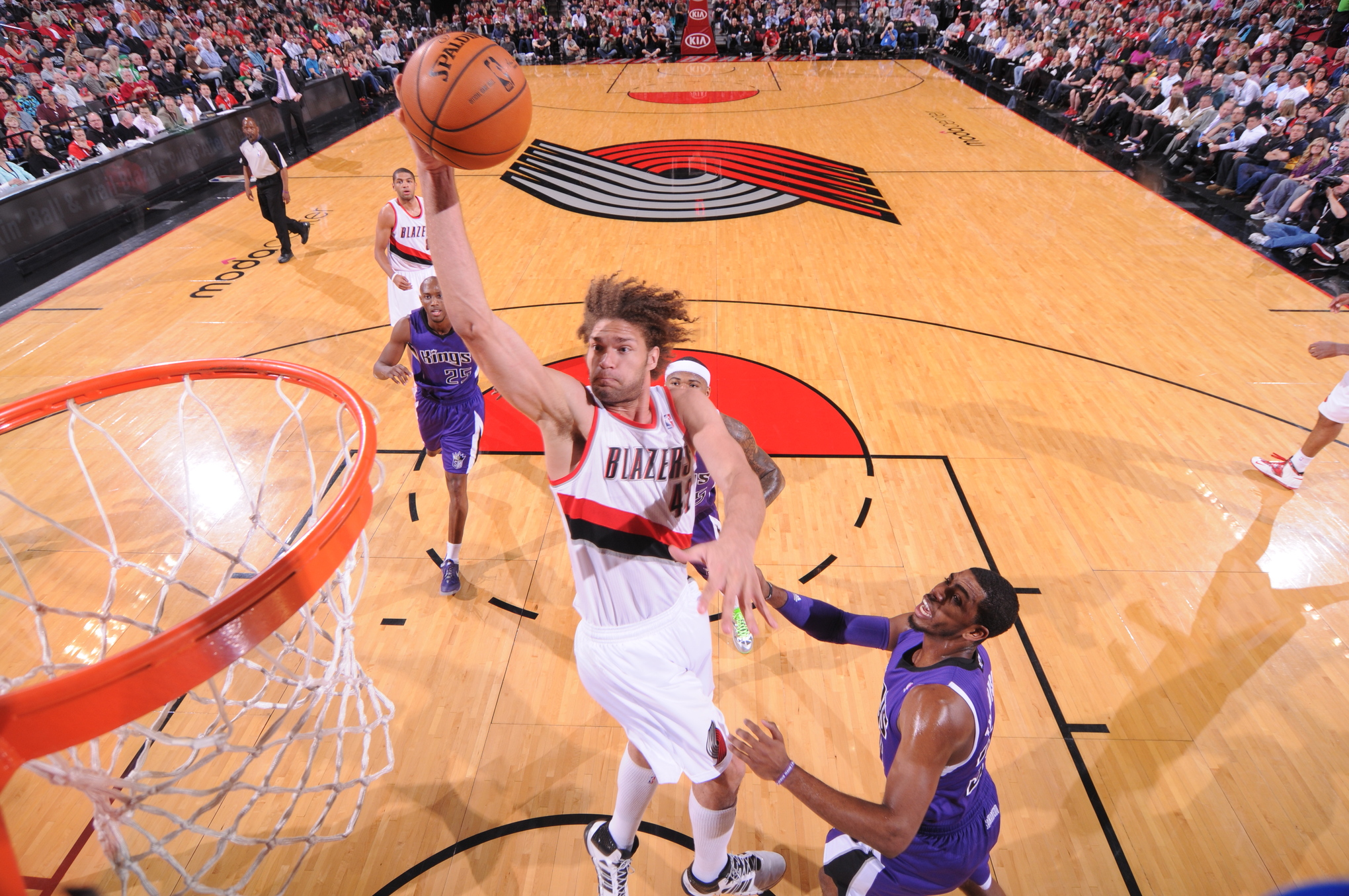 A three-team deal this summer netted the New Orleans Pelicans a sign-and-trade for Tyreke Evans, but the team needed to part with Robin Lopez to get it done. What seemed like a minor upgrade for Portland has become much, much more. Lopez has looked fully recovered from back problems that dated back to his time with the Phoenix Suns two seasons ago, and he's posting career highs in rebounds and blocks per game.

Most important is Lopez's rim-protecting that has helped enhance -- or mask, depending on how you see it -- the defensive abilities of power forward LaMarcus Aldridge. Considering the limitations of backup center Joel Freeland and the slow development of young big man Meyers Leonard, Lopez has made the biggest of differences for Portland.

Portland's offense is incredible. Led by LaMarcus Aldridge, the Blazers' attack does everything pretty well, but is especially strong at limiting turnovers and hitting the offensive glass. Portland draws a decent amount of fouls and shoots pretty well, especially from beyond the arc. Few teams pull the trigger from long-range more than the Blazers.

Portland's defense, however, leaves quite a bit to be desired. The Blazers rank in the lower half of the league overall, despite a really strong shooting defense and low foul rate. Portland forces the fewest turnovers in the NBA and are iffy on the defensive glass. We'll see how the playoffs test what has been a mediocre defense.

Our resident coach's scouting report on how to stop the Blazers.

Portland's Flow offense is a thing of beauty when properly executed. We could choose 10 different plays to feature, but this one wins because of the dizzying off-ball motion.

This set is triggered by a wing cutting from the baseline across the middle of the floor right in front of the point guard and onto the other side. That trigger eventually leads to the other wing sliding from one corner off a pindown screen on the other side. If he's open, the point guard finds him curling into the lane or fading to the three-point line. If not, the same wing that started the play will come back off a screen on the side the other wing vacated, and the whole thing continues. Portland generates great looks from all this motion.

This set has an official name, but I call it ‘Around the World' because it looks like the two wings are circling the globe.

ROOT FOR THE BLAZERS BECAUSE...

The Houston Rockets, Portland's first-round opponent, have constructed a team that only their mothers could love ... and them barely. Semi-motivated, half-injured Dwight Howard? The debate about which flops around more on the court, James Harden or his beard? You want two months of this?

Just get the Blazers past the Rockets and you have your Cinderella story. High-scoring offense, fewer whistles interrupting play and more Damian Lillard! How can you go wrong?

Best Case: The Blazers win a seven-game series with Houston as LaMarcus Aldridge goes for 20 and 12 every night and each game is decided on a cold-blooded Damian Lillard three.

Worst Case: The Blazers lose a seven-game series with Houston as Dwight Howard keeps Aldridge in check and every game is decided by a Mo Williams three after Pat Beverley keeps the ball out of Lillard's hands.