How the Hawks' shooting made Roy Hibbert's life miserable

The Hawks' ability to put five shooters on the court significantly nullified the Pacers big man's impact in Atlanta's stunning Game 1 victory. We explain how in this breakdown.

Share All sharing options for: How the Hawks' shooting made Roy Hibbert's life miserable

The Indiana Pacers have a serious problem. The Atlanta Hawks are not a good team -- they finished 10 games behind the West's No. 9 seed and openly talked about not being proud of finishing eighth -- but they are a nightmare matchup because their shooting can pull Roy Hibbert away from the basket, where he's at his best.The assumption was that the Pacers' overwhelming talent advantage, even after their late-season swoon, would be enough to overcome this.

Then, Game 1 happened. Thirteen days after embarrassing Indiana in their own building in the regular season, the Hawks did it again in the first round of the playoffs. As they did then, the Hawks spread the floor with five shooters and Indiana's behemoths couldn't keep up. Toss in Indiana's usual stagnant offense, and you have a recipe for a 101-93 Pacer defeat.

Given the Pacers' tepid play over the final part of the season, they were going to struggle against whoever they played in the first round. When you go 16-14 with a negative point differential after the All-Star Break, any opponent is a threat.

But the Hawks in particular present uncomfortable questions that the Pacers must address. Atlanta is an extreme case study for the league's changing offensive nature. Since Al Horford went down, Atlanta has used Macedonian rookie Pero Antic at center, a man with the size of a traditional big man that has no post game and instead prefers to shoot threes. Paul Millsap -- a somewhat-undersized player that has finally been coaxed into shooting threes by coach Mike Budenholzer -- is the other "power" player. Kyle Korver is the best three-point shooter in the league, and fellow starting wing DeMarre Carroll has become proficient from the corners. That gives plenty of space for Jeff Teague, a speedy but sometimes-indecisive point guard, to attack.

The Pacers' defense is built on a simple principle: funnel all drives into Hibbert and let him swallow them up with his size, length and verticality mastery. But what happens when Hibbert isn't there because he's forced to check a proficient three-point shooter? Stuff like this: 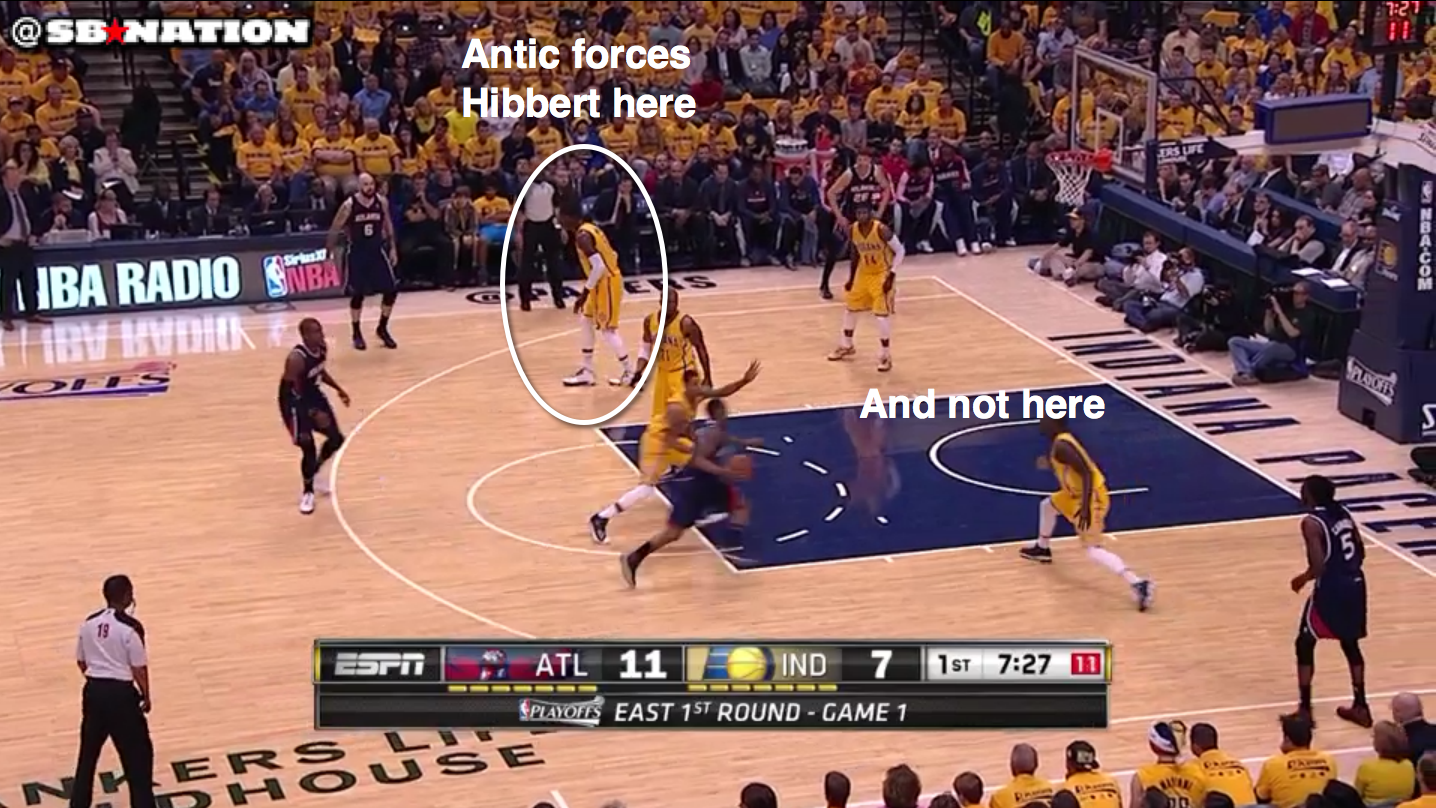 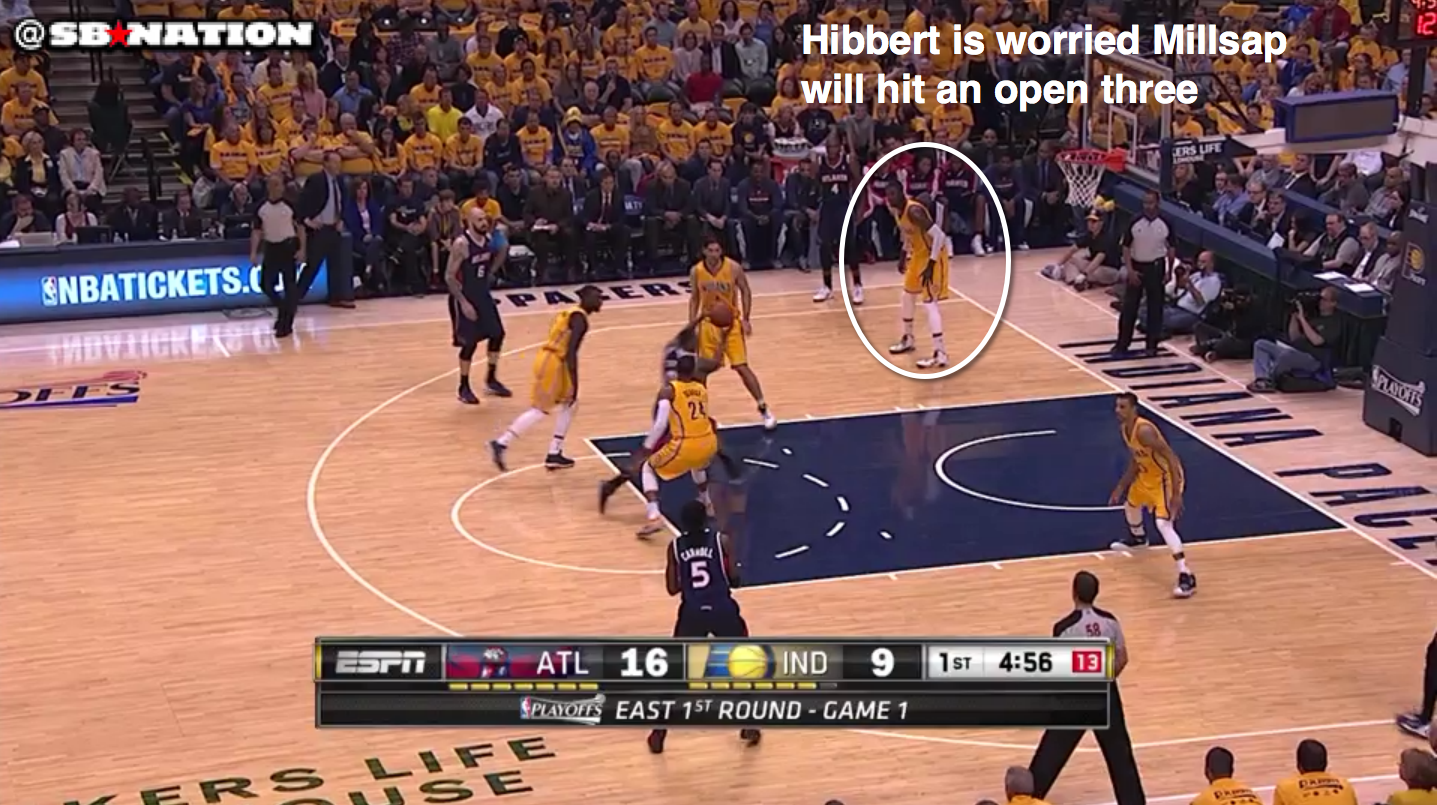 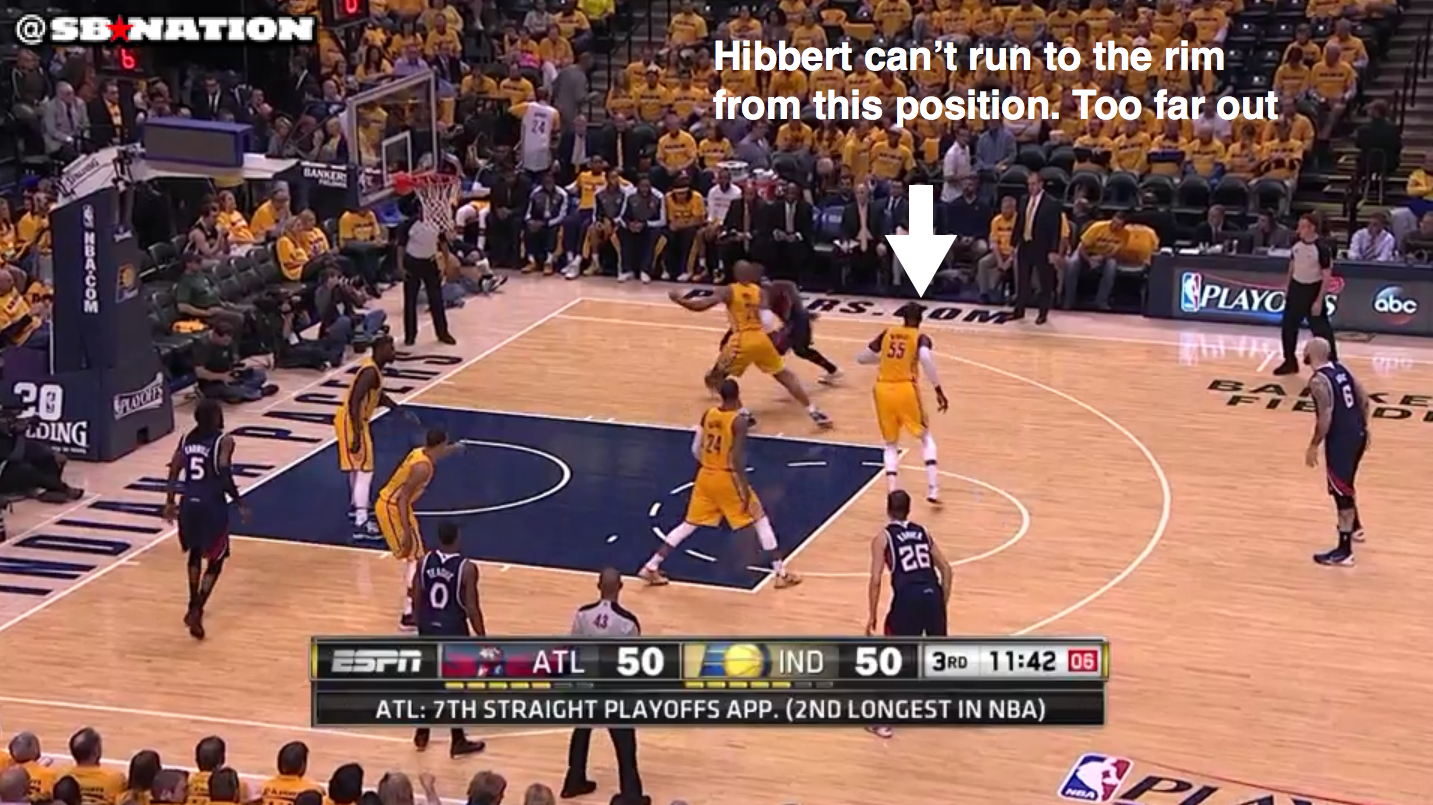 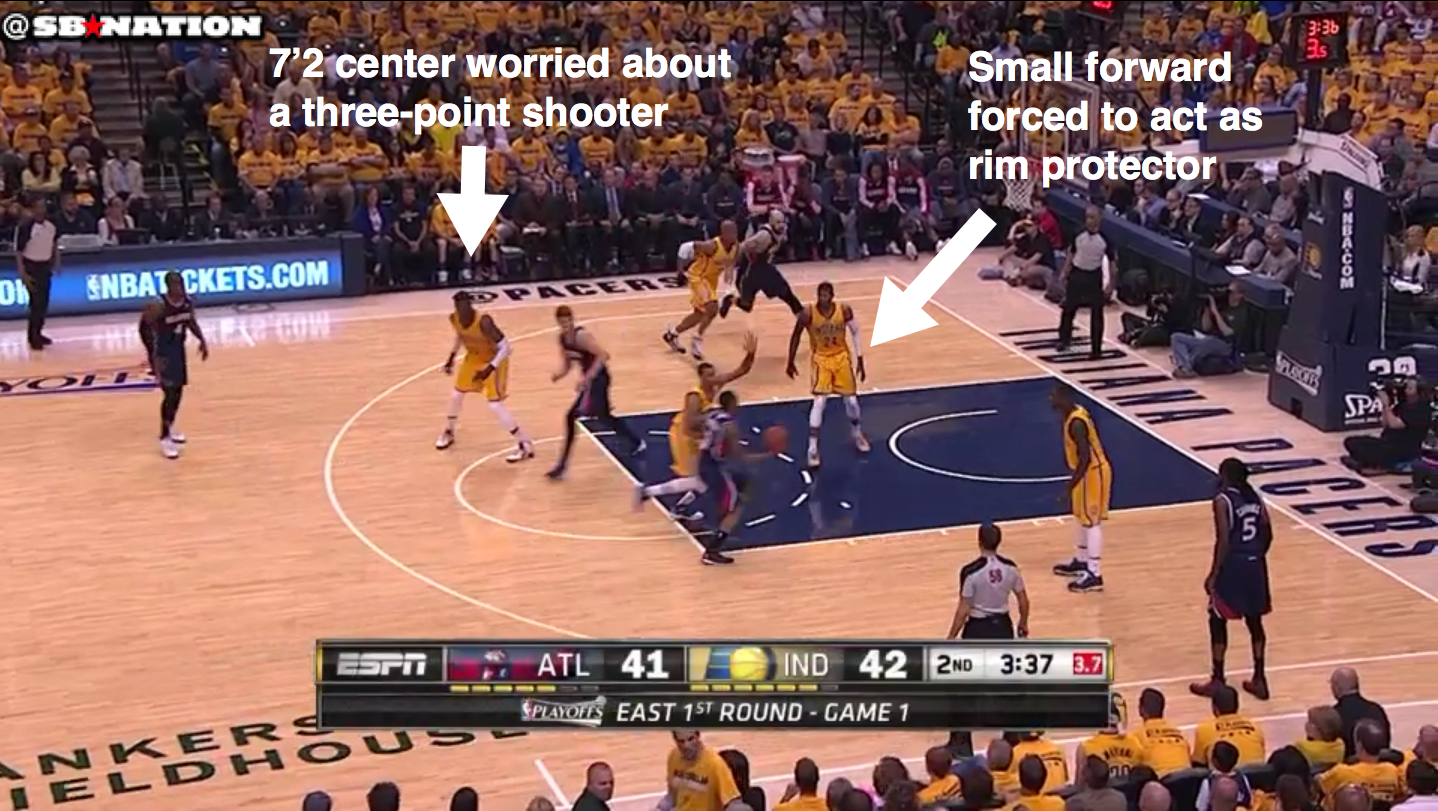 In the past, teams would try to coax Hibbert out of the lane by involving him directly in pick and rolls, but the Pacers' center became increasingly good at not taking the paint. Sometime in the middle of the year (as I noted in this piece) teams changed their strategies, choosing instead to involve the other Pacers players and find ways to force Hibbert too far away from the hoop as a help defender. After all, if you have great shooting big men like Antic and Millsap, what better way to use them than to act as a spot-up threat from the perimeter to force Hibbert out?

And Atlanta has more tricks up its sleeve. Watch how Kyle Korver sneaks in a backscreen on the opposite side just as Teague splits a Pacers trap.

These are the kinds of things the Hawks can do with all their shooters. It's easy to say that Hibbert needs to find his way to the rim anyway, but this is the alternative:

He can't win either way. Either he protects the basket and watches Antic and Millsap get open looks, or he comes out of the lane a step further and watches Teague slice into his real estate without penalty.

Of course, there's a reason Atlanta is 38-44 and not a juggernaut. Normally, the Hawks' open style costs them defensively, where teams can take advantage of all these offense-first, undersized players. But the Pacers' offense hasn't taken advantage of anyone for two months, and that continued Saturday. Paul George and Lance Stephenson both tried to do too much, David West couldn't hit enough jumpers and Hibbert was taken out of the game by fronting, defenders jamming his legs and the rest of the Hawks shrinking the floor. Indiana's offense can't score on anyone, much less the Hawks.

DeMar DeRozan and the Raptors had been waiting patiently for their first playoff game in years. Then, it went terribly.

So, what's the solution? It's very difficult to answer. Many will call for Vogel to sit Hibbert more often, and there is some merit to that. Unless Elton Brand is in the game, this is a brutal matchup for Roy. He cannot be expected to close out on three-point shooters and simultaneously protect the paint.

But are the alternatives particularly enticing? Ian Mahinmi has played well of late and is slightly more mobile, but even he's too big and too slow to cover Antic and Millsap. Vogel could go small and put Chris Copeland in the game, but that only accounts for one of those two shooting bigs. He could also go even smaller and play West or Luis Scola at center, but that hacks away at Indiana's core identity.

The best solution, then, is for every other Pacers perimeter defender to step up. They're used to Hibbert covering up any breakdowns, but that's not going to work in this series. George Hill cannot let Teague zip by him even when he goes under ball screens; otherwise, Vogel will need to put George on Teague to contain him. By that same token, Stephenson and George cannot fall asleep on Atlanta's dizzying off-ball motion. They also cannot lose Korver in transition like they did a couple times. Better defense at the point of attack will go a long way.

That's not easy either, though, not in this era of no hand-checking and not when they are used to Hibbert being there. The Hawks have now beaten the Pacers three of five times this year, twice decisively in their own building. This bad matchup isn't going away.