The playoffs are underway, which means almost half the league is already looking forward to the draft. Let's mock it.

Now that we know the lottery odds, we can take a deeper look into the 2014 NBA Draft. This mock assumes that all of the odds work exactly how they should. That, of course, won't happen, but this is an important exercise for draft discussion.

With that being said, let's get to it. Here is our latest NBA Mock Draft.

Milwaukee's new ownership doesn't want to start its campaign as The Guys Who Passed On Andrew Wiggins. The Kansas product can guard either wing position and fly out in transition. Plus: Giannis Antetokounmpo, Larry Sanders, John Henson and Wiggins has to be the longest front four of all time.

Philadelphia was a train wreck on offense last year, with too much of the scoring load going on Michael Carter-Williams' shoulders. Parker would help alleviate that immediately. He can score the rock from anywhere on the floor, and playing him alongside Nerlens Noel, Carter-Williams and potentially Thaddeus Young would mask some of his defensive issues.

Orlando needs to find its point guard of the future, and Exum is the guy with the highest ceiling. He's big (6'6 with a 6'9.25 wingspan), quick and can defend either backcourt position. Pairing him with Victor Oladipo would give the Magic the most athletic young backcourt in the league.

The Derrick Favors-Enes Kanter duo has not worked out the way Utah hoped. Julius Randle is a possibility, but it would be tough to pass up on Embiid. He's a fluid seven-footer with a great wingspan (7'5). Adding him would open up Utah's option to trade either of its incumbent big men.

Protecting yourself against history

Embiid's best fit is in Boston. He could anchor the paint and let either Kelly Olynyk or Jared Sullinger space the floor. But he's off the board. Indiana's Noah Vonleh is an option, but he's better suited as a power forward and drafting him would cause a logjam with Olynyk and Sullinger already there. 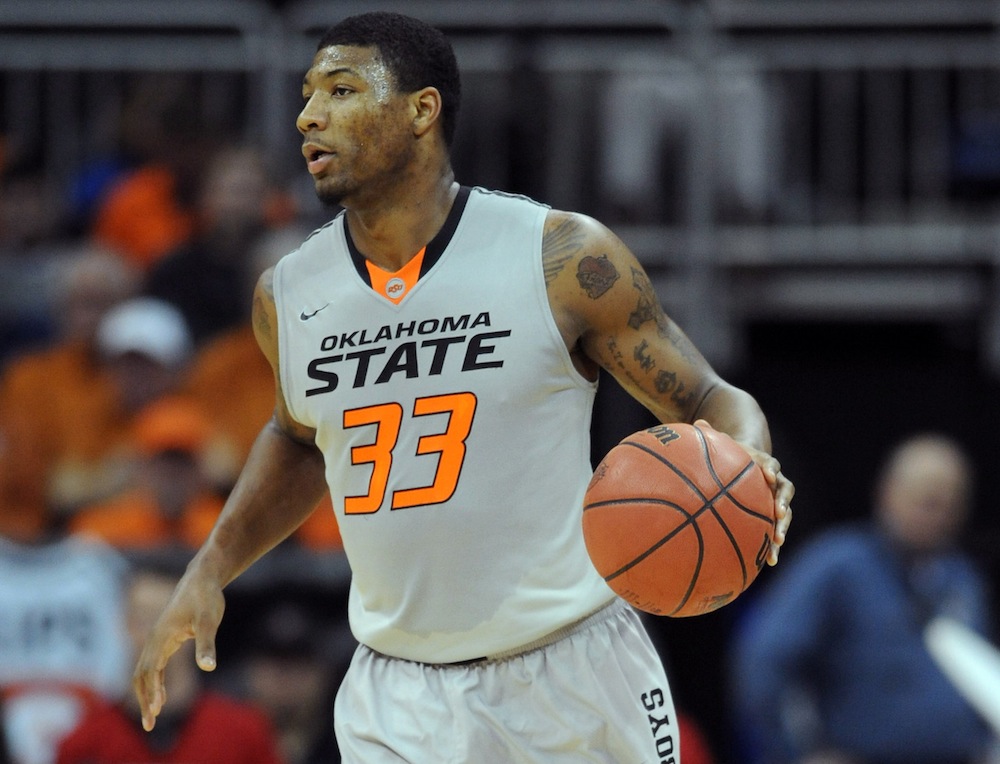 So, I've got Boston taking Smart. He's super aggressive on both sides of the ball and can fill either guard spot.  He could play off the ball with Rajon Rondo or on the ball with Avery Bradley. Drafting Smart also gives Boston the option to trade either guard and move forward in its rebuild.

The Lakers need help everywhere. Only three guys -- Kobe Bryant, Steve Nash and Robert Sacre -- are guaranteed for next season, leaving openings at every position. Randle is a bowling ball who can attack from the perimeter or in the post. He'll eventually need to be paired with an interior defender, because he has a short wingspan (6'11) and didn't prove much rim protection at Kentucky. But he's a horse who could average 15 and 10 in his rookie year. He'd be a nice building block for the rebuildingtooling Lakers.

The big problem with Julius Randle

The Kings are a few pieces away from contending for a playoff spot in the West, and power forward is their No. 1 position of need. Gordon is thin (212 pounds), but he's a versatile defender with tremendous leaping ability. He could fit between DeMarcus Cousins and Rudy Gay at power forward or slide to small forward, depending on the matchup.

The Pistons have issues everywhere. Josh Smith is an expensive mess, Greg Monroe is entering restricted free agency and incumbent point guard Brandon Jennings shot just 37 percent from the floor. Vonleh is a possibility here, but the frontcourt is already clogged with Smith, possibly Monroe and Andre Drummond. Ennis, meanwhile, is a pass-first point guard and would provide a nice change of pace to the shot-hungry Jennings.

Quietly had a fantastic freshman year

If the Cavaliers want to contend for a playoff spot, they'll need players who they can plug in and play immediately. McDermott is ready to stretch the floor from either forward spot. He won't be a star or put up the gaudy numbers he compiled in college, but he's mature enough to step into a complimentary role.

Vonleh has a lot of upside, but he's still a work in progress. The Sixers can afford to be patient with him. They filled their roster with Carter-Williams, Thaddeus Young, Tony Wroten and a bunch of D-League players. Vonleh's a terrific rebounder (13.6 per 40 minutes) and he can stretch the floor on offense, but he's turnover prone (18.6 percent turnover rate) and only an average athlete. Still, he could develop into a nice compliment to Nerlens Noel, a high-flying big man who is more comfortable around the rim.

This is a little high for LaVine, but I like the fit in Denver. LaVine is a quick, athletic guard who thrives in transition. The Nuggets, likewise, were the third-fastest team in the NBA, per NBA.com's stats page. LaVine isn't a great defender or playmaker yet, but he can light it up from deep. Ty Lawson and LaVine would be one of the fastest backcourts in the NBA.

Orlando was the second-worst offense (101.7 points per 100 possessions) in the NBA. The roster is deprived of playmakers. Drafting Exum, then Anderson gives the Magic two guys who can create offense for others. Anderson is a creative point forward who works best with the ball in his hands. The problem is on the defensive end, where he is too slow for small forwards and too thin for power forwards.

We know nothing, but it's alright

Next year is pivotal for the Timberwolves if they hope to keep Kevin Love. They won't have much wiggle room for free agency, so they need to nail their draft pick. They were the fifth-worst three-point shooting team in the NBA. Harris can shoot threes and defend either wing position.

Young would give Phoenix options on the wing with P.J. Tucker's impending free agency. He has the perfect size (6'6, 6'11 wingspan) for an NBA wing and a smooth, left-handed shooting stroke.

Warren wouldn't start over Paul Millsap, Kyle Korver or DeMarre Carroll, but he'd give the Hawks an immediate scoring option off the bench at either forward spot. He's an aggressive scorer with three-point range and an array of weird, yet effective flip shots around the rim. 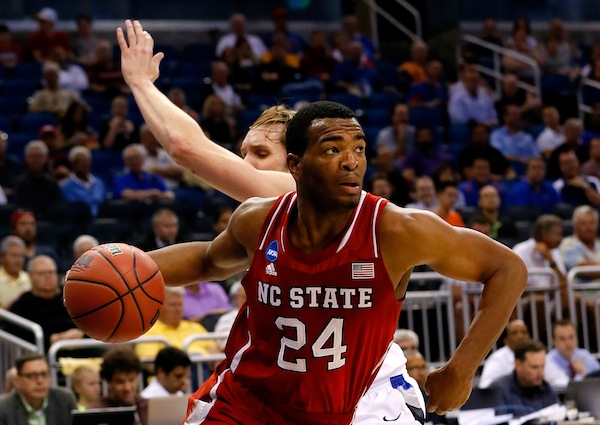 The Bulls should add shooting in the offseason, whether by free agency or through the draft. They could also use another rotation big man; their fourth big, Nazr Mohammed, logged only seven minutes a night. Payne is a long (7' wingspan) and athletic power forward who also provides deep shooting. It's the best of both worlds.

Saric is a skilled combo forward who can post up small forwards and create for teammates off the bounce against power forwards. But he has short arms (6'10 wingspan) and I'm not sure what position he'll defend. Plus, it's unclear whether he'll actually play in the NBA next season. The Celtics can afford to take a chance on him, though, as they just recently entered the rebuilding stage.

Grant is stuck in between forward spots. He isn't skilled enough yet to play small forward -- he only shot five three-pointers all season -- and he isn't big enough (6'7, 196 pounds) to play power forward. But he has a huge wingspan (7'2.5), he's one of the best athletes in the draft and he loves to defend. Drafting Young, then Grant, gives Phoenix a shooter and a defender.

Stauskas could go much higher than No. 19, but he'll likely fall under the radar when he doesn't measure out as well as his peers at the combine. The Bulls shouldn't hesitate to draft him if he slips to their second pick. He's the best shooter in the draft and an improving playmaker. Adding Payne and Stauskas is a huge win for Chicago.

Capela is a few years away from developing into a rotation player because he's a beanpole (6'11, 211), but the defensive potential is there. He has a huge wingspan (7'4.5) and is an explosive athlete. In Toronto, he could develop behind Jonas Valanciunas, Amir Johnson and Patrick Patterson.

Because the Thunder need more young wing players who can fill it up on offense. Of course!

At 6'11 and 280 pounds, Nurkic is a prototypical center. The 19-year-old Bosnian is a powerful rebounder and finisher around the rim. But he fouls a ton (10 per 40 minutes, per DraftExpress) and is only an average athlete. Who better to nurture Nurkic than Marc Gasol?

Utah needs to collect as many assets as possible, and Hood is the best player available. He also fills a need. The Jazz were the league's sixth-worst three-point shooting team (34.4 percent) and the sixth-worst offense, per NBA.com's stats page. Hood is a silky shooter who can also score off the bounce.

McDaniels isn't that skilled and still scored more than 20 points per 40 minutes in his junior season. He's an incredible athlete who loves to defend. He's similar to Charlotte's Jeff Taylor, but he's almost four years younger. He could find time in Charlotte's wing rotation.

At 6'6 with a 6'11 wingspan, Bogdanovic is the perfect size for an NBA swingman. He can shoot from deep and has the athleticism to defend NBA wings. Houston can never have enough three-point shooters. Who knows if he'll come over right away, but he's the type of player the Rockets covet.

There's no telling what the Heat will do about Mario Chalmers' pending free agency, but drafting Napier could serve as some insurance. Napier, like Chalmers, improved his draft stock with a championship run in his final college season. Napier can create shots for himself in isolation situations and run pick and rolls.

The draft's most divisive prospect

Early played mostly at power forward in his four years with Wichita State, but he has the perfect build (6'8, 216 pounds) for an NBA small forward. Phoenix could use Early as Gerald Green's backup on the wing or as a power forward in its small-ball scheme. 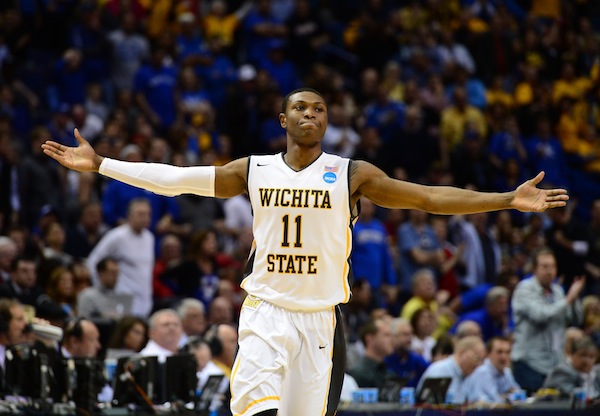 The Clippers need another big man, since Glen Davis can opt out of his player option at the season's end and Ryan Hollins is an unrestricted free agent. Stokes isn't tall (6'9), but he's long (7'1) and powerful (256 pounds). He can rebound and defend the paint like a brick wall. He'll find a home in the NBA.

Payton's a long, athletic point guard prospect who put up colossal numbers in college. Oklahoma City loves length, and Payton (6'3, 6'7 wingspan) fits that bill. He isn't a great long-range shooter, but he's a creative ball handler who can run an offense. He could go higher than No. 29.

Patty Mills is a free agent this summer and Carson could ease into Mills' role. Carson was once a potential lottery pick, but his stock dropped as he struggled to finish at the rim this season against NBA length. Doesn't it just feel like Gregg Popovich could turn Carson into a star? Or is that just how it feels with every player the Spurs pick?