The NCAA tournament is over, so it's time to start thinking about the NBA Draft. We unveil our first ranking of the top prospects in what is supposed to be a loaded class.

College basketball is over and lottery teams are now preparing for June's NBA Draft, which means it's time to unveil our first SB Nation big board. Here are our top 15 prospects, followed by the next five.

(Note: We are assuming all underclassmen on this list that have not declared for the draft will eventually do so.)

The Wiggins hype died down a little after he was unable to fulfill unreal expectations at Kansas, but he's still a fantastic NBA prospect. He's long (7' wingspan), athletic and can defend both wing positions, and his jump shot is more developed than I expected. He's not yet comfortable creating offense and he'll struggle next season if he's asked to be a team's No. 1 option, but those aspects will improve as his ball handling tightens.

Parker is the most skilled offensive player in the draft. He can score on the block and create shots for himself on the perimeter. He's big enough (6'8, 240 lbs, 7' wingspan) to play power forward if a team wants to play small and he's fast enough to play small forward in more traditional lineups. Parker's defense is concerning, however, which is why Wiggins gets the nod over him.

It's going to take time before Embiid is ready to play center full time in the NBA. He has the size (7', 250 lbs) and length (7'5) to man the position, but he fouls too much (5.8 per 40 minutes) and turns the ball over a ton (4.1 per 40). He's great at finishing around the rim and he gobbles up rebounds (20.5 percent rebound rate), but he's still a long-term project despite his breakout college campaign.

Why Randle's wingspan is a problem

Are Julius Randle's arms too short to be an impact player in the NBA?

Why Randle's wingspan is a problem

Randle is the most physically dominating prospect in the draft and improved his stock with a deep NCAA Tournament run. He's a load in the paint and loves to throw around his weight. He relies too heavily on his left hand right now and he'll need to develop more of an outside game in the pros because of his short 6'11 wingspan.

At 6'6 with a 6'9.25 wingspan, Exum is an enormous point guard prospect. He has a tight handle and an extremely quick first step. His physical profile is why I have him rated over Marcus Smart even though Exum has been out of sight, out of mind this year.

Gordon was initially compared to Blake Griffin, but he plays more like Shawn Marion. He's a great pick and roll defender and he slides his feet like someone half his size.

Aaron Gordon pick and roll defense is a bundle of fun https://t.co/pg29wQHce8

He's skilled enough to grab a defensive rebound and push the ball himself in transition or he can race down without the ball and fill the lane from the wing. He's a terrible free throw shooter (42.2 percent), though, and that's enough to keep him out of the top 5.

Smart played off the ball more often this season with Oklahoma State, but he will surely be a point guard at the next level. He cut his turnover rate this season (18.9 percent to 14) while increasing his assist rate (26.8 percent to 30.1), though playing off the ball may have helped those numbers. He still needs to work on his decision making -- Smart shot over six threes per 40 minutes despite shooting under 30 percent from beyond the arc. NBA defenses will gladly give Smart six threes a game.

Harris is the prototypical 3-and-D guy. He routinely guarded the opposing team's best player and usually gave him fits. He can slide his feet around ball picks and he navigates well through off-ball screens.

here's a good example of Gary Harris' perimeter defense. closes out, slides and cuts off the drive. https://t.co/CQp8xthVNb

At 6'9 with a 7' wingspan, Payne is the perfect size to defend NBA power forwards. He's not a great rebounder, but his real value is as a stretch four. He developed a long range jumper at Michigan State and shot over 42 percent from deep this season. Then he went out and did this at the college dunk contest:

Anderson averaged 14.6 points, 8.8 rebounds and 6.5 assists per game while hitting 48.3 percent from behind the arc this season. He'll present matchup problems in the pros because he's an excellent ball handler and passer for his size (6'8, 233 lbs, 7'2.5 wingspan). The problem is figuring out who he defends. Anderson isn't strong enough for power forwards and he's too slow to stick with NBA wings.

Ennis is a smooth point guard who can operate in pick and rolls. He can pass to the rolling man or flip the ball to the shooter on the opposite wing. He also rarely turns the ball over (6.2-to-1.9 assist-to-turnover ratio per 40 minutes).

But Ennis spent the year playing defense in Jim Boeheim's 2-3 zone. Can he defend the lightning-quick point guards in the NBA? We won't know until he hits the floor. 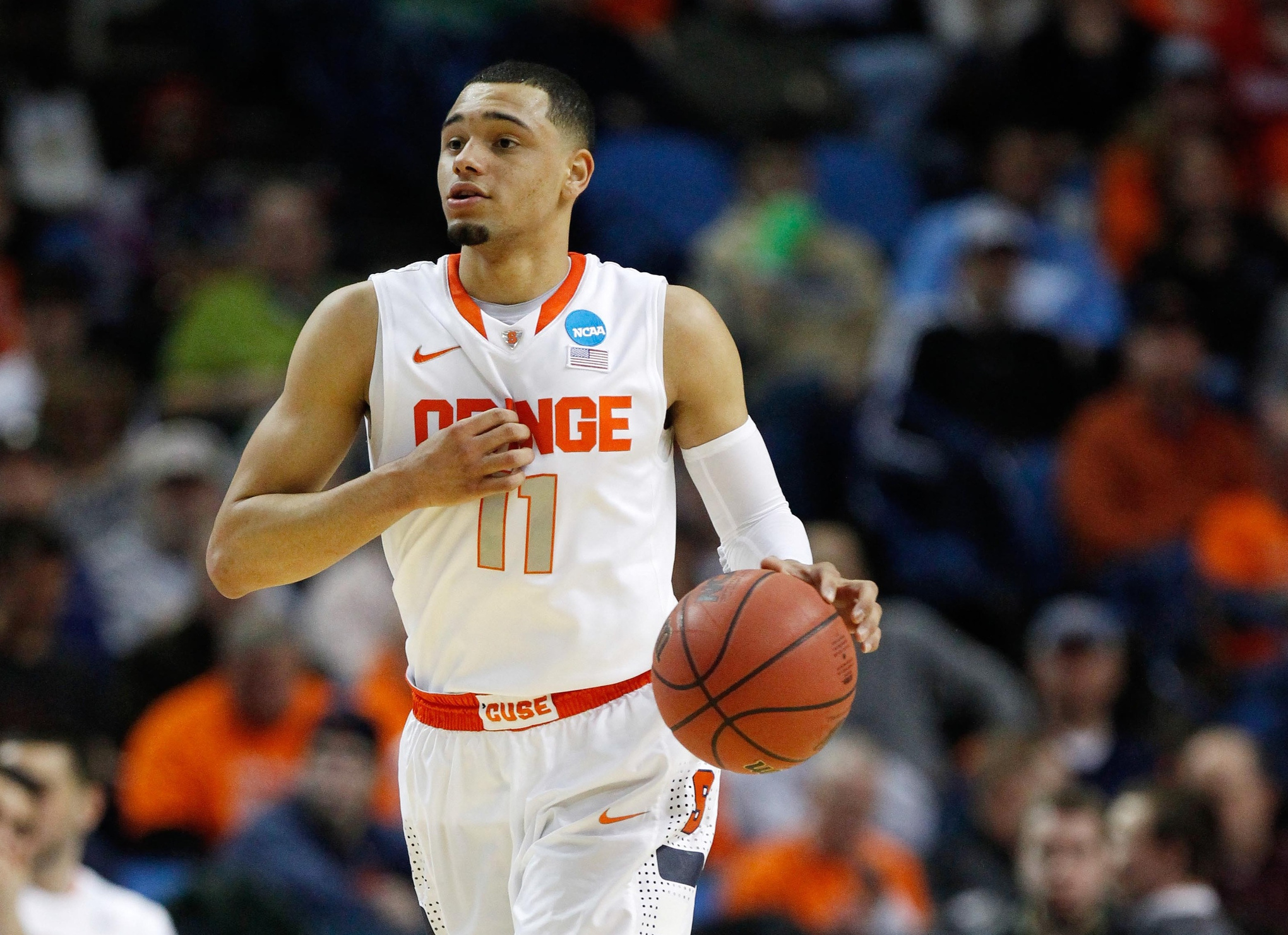 Cauley-Stein is huge (7', 244 lbs) and active on defense. He can recover back to his man when he hedges on pick and rolls and he's an excellent shot blocker (4.8 blocks per 40 minutes). He has good hands when catching lob passes, but that's about the extent of his offense. He'll likely never develop a post game, but he has the physical tools to one day anchor an NBA defense.

Unfortunately, we didn't see much of Cauley-Stein in the NCAA Tournament after he suffered an ankle injury against Louisville in the Sweet 16.

I have Vonleh lower than most. I love his wingspan (7'4) and rebounding (13.6 per 40 minutes), but he's very underdeveloped on offense. I like him as a pick and pop option, but he really struggled reading double teams in the post (0.6 assists to 2.1 turnovers). He was also a mess defensively, which is why I have him behind Cauley-Stein.

Vonleh's really young (18 years old) and has an NBA frame, but he's a long-term project.

Stauskas improved as much as anyone in college basketball this year. In his freshman season, he was only a spot up shooter. This season, he worked as Michigan's secondary ball handler. He can navigate pick and rolls and he's still a deadly long range shooter (44.2 percent on 6.5 attempts per 40 minutes).

In the right role, McDermott can thrive in the NBA. Asking him to replicate the numbers he put up in college when he's in the NBA would be a mistake, however. He won't bully NBA big men like he did in college and he isn't quick enough to create against small forwards, but let McDermott camp out on the perimeter and knock down shots and he'll be a killer. 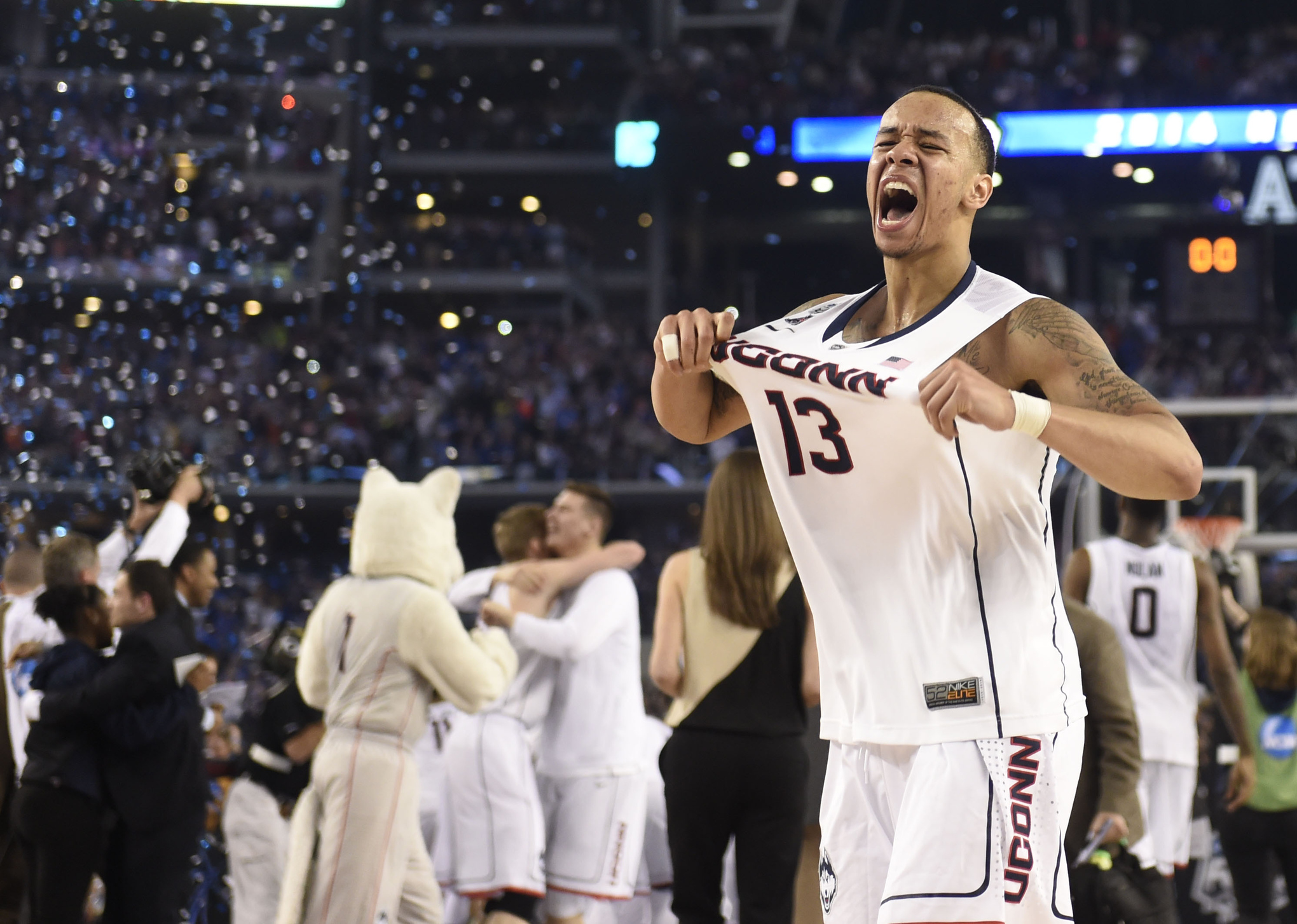 Where is Shabazz Napier?

Connecticut's senior guard ripped through the NCAA tournament en route to a national championship and Most Outstanding Player honors. His age (23) and size limit his upside, but his NCAA exploits will dramatically help his stock.

Napier capped off a brilliant season with a bang, leading UConn to the national championship and earning Most Outstanding Player honors.

Last impressions are important for guys who aren't sure-fire lottery picks. Look at Mario Chalmers. He was a fine player, but the last thing people remember about his collegiate career was his game-winning three-pointer in the 2008 championship. He was selected early in the second round and has made a career for himself with the Miami Heat.

Napier is in a similar situation. He's not a top 20 prospect, but he has pushed himself into a late-first/early-second round position. I have him in the 28-35 range on my big board and he could be an excellent role player for the right team.