In an NBA rarity, Mike D'Antoni leaves the Lakers on his own terms

Coaches don't usually have a say in when their time is up. Mike D'Antoni did this time around, resigning from the Lakers instead of playing things out and collecting his full 2014-15 salary.

Share All sharing options for: In an NBA rarity, Mike D'Antoni leaves the Lakers on his own terms

Few coaches have the courage to walk away from guaranteed money. When faced with a lame-duck season that will pay $4 million, nine of out 10 people will take the season, grumble quietly about not getting an extension and hope for the best. In even the worst situations, coaches will almost always wait for the team to fire them.

The math is simple. You get fired, you get paid in full. You walk away? You're not getting all of that money.

In the case of Mike D'Antoni, who resigned late Wednesday, the Lakers cut a deal to pay him "more than half" of the $4 million owed, according to ESPN. Had he waited it out and let the team can him, he would have gotten all $4 million. But once the Lakers declined to pick up his option for 2015-16, he decided to escape with as much as he could wrangle. He sacrificed a good chunk of change to avoid the drama ensured to surround him if he stayed.

That's absolutely commendable. Coaches are treated like dirt by NBA owners and GMs. The high turnover is obviously well-known, and we're all aware that every coach in the league is paid less than at least three stars on his own team (In many cases, especially with first-time head coaches, it'll be more like 10 players who make more than the coach.) Coaches get fired at midseason when GMs think on-court performance is reflecting poorly on their offseason moves. Coaches get fired when owners feel the need to make it look like they are doing something about the losing. Replacing the coach is rarely a salve, because teams usually lose due to player personnel. Coaches get fired when their star players disengage or, in some cases, actively sabotage their tenure. Even the great gentlemen of the league, like Magic Johnson and DeMarcus Cousins, have gotten coaches fired.

Aside from Mario Chalmers, no one in the NBA gets treated as callously as coaches. Consider Dwane Casey, who had to deal with misshapen rosters created by Bryan Colangelo for two years. He entered the season on Guillotine Watch, turned the franchise around after the Rudy Gay trade and has absolutely no guarantee of coming back next season because the current GM (Masai Ujiri) didn't hire him and might want someone else on the bench. All Casey can do is hope his players carry him far enough to make a firing look foolish. Even when coaches have success, as Casey has, they are relying on the performance of other men (players) and the good graces of other men (their bosses). 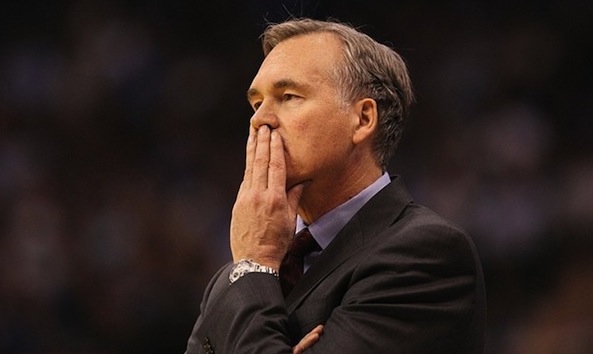 D'Antoni's in a weird zone. He's a big name who commands a big salary and will be mentioned for most openings (if not the New York Knicks' opening, for obvious reasons we'll call Phil Jackson, Steve Kerr and the years 2008, 2009, 2010 and 2011.) But he's also had a pretty bad run of late. Since leaving Phoenix, he's made the playoffs twice in the five seasons he's completed. He's 0-8 in those playoff runs. ("Runs.") His winning percentage with the Suns was .650; since then, he's at .425. The shine has worn off. There's also no chance he draws interest as a hot young thing like so many recent assistant coaches (Brian Shaw, Michael Malone) or college guys (Kevin Ollie).

But the success he had was not faked. His Phoenix teams really won those games. They might have been a dicey suspension away from a Finals appearance, or even a championship. Mike D'Antoni was a major contributor in getting Steve Nash two MVP trophies and Amar'e Stoudemire $100 million.

If Mike D'Antoni's tenure with the Lakers comes to an end soon, his next stop may be at the college level.

Steve Kerr, Byron Scott among others linked to LA

Kerr and Scott are just two of the names to be linked to the Lakers' open head coaching position after the resignation of Mike D'Antoni.

In addition, one glance at D'Antoni's recent rosters tells you why he's 0-8 in the playoffs since 2008. His earliest Knicks teams were purposely torn down to make room for LeBron James. When the Knicks instead landed Amar'e and Raymond Felton, D'Antoni did about as well as anyone could have. The team did underachieve under MDA once Carmelo Anthony and Tyson Chandler arrived, but Mike Woodson's stand-around-and-watch-Melo offense and hyper-aggressive switching defense were a better fit at that point. But the biggest problems with the D'Antoni-era Knicks were related to player personnel and fit, not coaching.

The same applies in Los Angeles. Remember, the 2012-13 Lakers were flailing in crisis before D'Antoni came aboard, and Mike D. actually ran them to a 40-32 record under his watch. Dwight Howard dealt with recovery from back surgery and a shoulder injury, Kobe was out for the playoffs, Steve Nash and Pau Gasol missed substantial time and the rest of the roster was light on production. And this season? Without Kobe, without Nash, without Howard and without Pau for long stretches? With Kendall Marshall, Xavier Henry, Wes Johnson, Nick Young and Jordan Farmar running the backcourt? Yeah, if you're using the 2013-14 season to tell me Mike D'Antoni can't coach, I'm just going to hit that mute button.

D'Antoni's career is now officially a mixed bag, and that's a tough place to be for a 62-year-old. But the fact that he took a haircut to escape the Lakers tells us he's ready for that next chapter, whatever it may: a reunion with Alvin Gentry? A move to a front office somewhere? College? Year-round focus on USA Basketball? In a profession where you rarely get to decide your own fate, there's honor in taking your ball and going home, wherever that may be.