The Bulls are addicted to grit, and maybe the rest of the NBA should join them

Chicago GM Gar Forman made an eyebrow-raising comment on the science of "grit," the much-maligned cliche. But he might he be onto something.

Share All sharing options for: The Bulls are addicted to grit, and maybe the rest of the NBA should join them

It's the perfect quote to put Gar Forman and the Chicago Bulls in context, and it came in the Chicago Tribune last week:

Forman told reporters that he had studies to support that "grit is the No. 1 factor in having success."

The jokes write themselves. Kirk Hinrich has made millions and millions of dollars from the Bulls on account of his grit. Tom Thibodeau would have a rightful claim to the title of Grindfather if not for the existence of Tony Allen down I-55. The Bulls of the past few years openly decline interest in the finesse superstars of the NBA, instead preferring to ride with gritty wolves like Joakim Noah, Taj Gibson and Jimmy Butler. 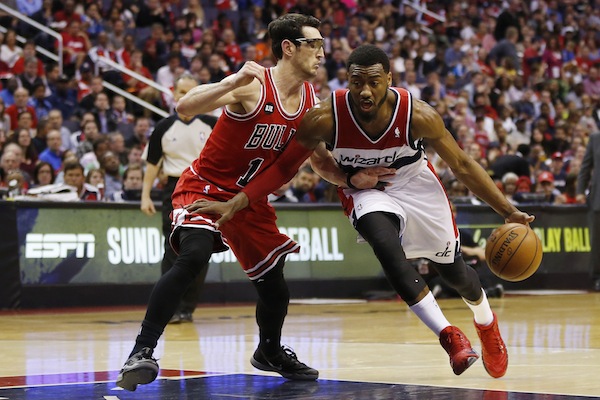 But as it turns out, there is some science on grit out there. What Forman might be referring to is the research of Angela Duckworth, who runs a lab at Penn focused on the study of grit and self-control. (She's also arrived on the TED Talk scene, resulting in grit questionnaires of dubious value like the one mocked by Drew Magary.) From The Duckworth Lab's research statement:

Grit is the tendency to sustain interest in and effort toward very long-term goals. [...] In prospective longitudinal studies, grit predicts surviving the arduous first summer of training at West Point and reaching the final rounds of the National Spelling Bee, retention in the U.S. Special Forces, retention and performance among novice teachers, and graduation from Chicago public high schools, over and beyond domain-relevant talent measures such as IQ, SAT or standardized achievement test scores, and physical fitness. In cross-sectional studies, grit correlates with lifetime educational attainment and, inversely, lifetime career changes and divorce.

The short version: having grit allows people to make, keep and achieve long-term goals and complete difficult tasks. When we think of grit in the sports context, it's with a much less positive intonation. "Grit" in sports has become a substitute for "less talented but still hard-working." It's the word used to describe David Eckstein, Wes Welker and Hinrich: they aren't as big or talented as their contemporaries, and as such the game doesn't look as natural or easy when they play it. But boy, they sure do try hard. Grit is used as qualitative attribute often covering up for inferior quantitative performance.

And yes, it's most often attached to white players. Deadspin combed 68,000 words worth of NFL Draft prospect profiles to determine whether white and black players were described differently. The word "gritty" was far more like to be mentioned in profiles of white prospects than black ones. 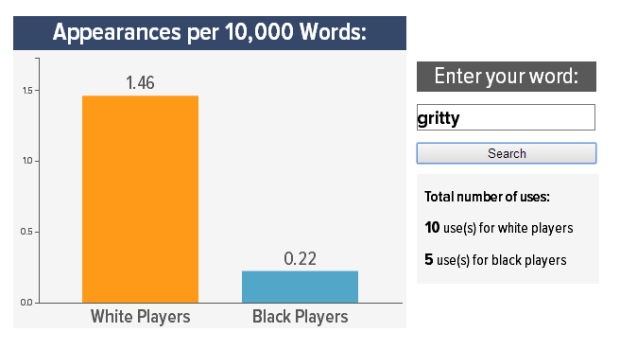 To be fair, the word "grit" was slightly more common among black prospects. Combined, white players still easily outpace black prospects in being referred to as gritty.

So if grit is a top indicator of success, and if white players are far more likely to be called gritty, what does that say about our definition of grit? Assuming the science is something approximating legit -- it seems to be a young field, so we'll see -- then it tells me our working definition is horribly wrong. We measure grit in the throes of the moment -- the floor burns, the dives into the first row, the reckless abandon of tight defense. We don't really look at time on the practice court, off-court hurdles overcome and how a player got through the struggles. We look at how their game is perceived to offer value to their teams.

A daily column on the NBA.5/12: No job is safe for an NBA head coach
5/5: Which playoff loser is ready for success
5/1: D'Antoni leaves the Lakers on his terms
4/25: The Thunder's uncertain future
4/23: How the Wizards escaped ineptitude
4/21: Don't forget about the Spurs' defense

For a guy like Hinrich, who hasn't shot 40 percent since 2011-12 and hasn't had a PER above league average in seven seasons, grit becomes one of the few positives you can offer. And it drives fans crazy! Where many fans see an underwhelming player given loads of minutes and rope, the coach or GM or broadcaster tells us that player has earned it via his immaculate grit. So "grit" becomes a dirty word, as it has with regards to the Bulls. When Forman says that "grit is the No. 1 factor in having success," we don't immediately consider that there is science to back that up. We just assume Forman is trumpeting his goofy devotion to less talented players with skinned knees.

But if Duckworth's science is right, there's value in it for general managers (in identifying truly gritty prospects) and coaches (in developing grit on the team). Surely some teams have already used cognitive tests to identify the presence or lack of grit; front offices do all of those prospect interviews at the Combine for a reason. And a lot of what would be specific about building grit is likely baked into existing player development philosophies. In a sense, Duckworth's work on grit (as far as I understand it) is a quantification of well-known theory.

That brings up another point that the brilliant Kevin Pelton makes:

The interesting question to me is how much grit is already priced into a player's statistical performance.

In other words, can a player without grit put up huge numbers in college or the pros? What would be valuable to NBA GMs is an ability to determine analytically what players have put up numbers due to having a high level of determination and long-term goal setting and what players have done that in spite of lacking grit. That swings two ways. Numbers without grit is either a red flag that warns against the player's long-term ability to flourish as the competition gets bigger, faster and better, or it's one other opportunity for a team to turn an unpolished gem into a valuable diamond.

Gasol named the Bulls as one team he may be interested in when free agency rolls around.

Can grit be fixed? GMs already draft so-called "raw" players who have poor shooting mechanics or a lack of footwork. Once grit can be reliably measured (if ever, and if not already), should GMs draft the quantitatively ungritty with aims on fixing that deficit and building a star?

Beyond the initial joke of "grit" as the most important factor of success, there's a lot of grist here to consider. Given the incredible success Forman and his front office have had in the draft -- picking Derrick Rose, Noah, Gibson, Omer Asik and Butler -- it's hard to laugh too much at the Bulls' philosophy.

We tend to automatically assume that Forman and the Bulls are wrong about grit. But maybe that's backwards. Perhaps we're just not seeing the real definition and determinants of grit. That's what makes Duckworth's research rather fascinating and perhaps important.