NBA Playoffs 2014: The unsurprising parts of the Clippers' comeback against the Thunder

Chris Paul, Doc Rivers and the Clippers took a risky approach to ignite a furious fourth-quarter comeback against the Oklahoma City Thunder. Or was it that risky?

Share All sharing options for: NBA Playoffs 2014: The unsurprising parts of the Clippers' comeback against the Thunder

Doc Rivers came to the Los Angeles Clippers with the defensive blueprint of his Boston Celtics teams, but what leads his resume is his ability to communicate that to his players. Maximizing the offensive potential resulting from that defense was the chore for lead assistant and former Phoenix Suns coach Alvin Gentry.

On Sunday, the results of the duo's season-long identity-building process rose to the surface, but a 22-point comeback was also familiar territory.

The Clippers played small ball to overcome double-digit fourth quarter deficit like they had done so before. When Doc Rivers went to Darren Collison, Chris Paul, Jamal Crawford, Danny Granger and Blake Griffin to erase a 16-point disadvantage in the fourth quarter against the Oklahoma City Thunder, this felt natural.

Back up to April 2, when the Clippers trailed the Phoenix Suns by 14 in the fourth quarter. Rivers went to a backcourt of Paul and Collison, and put Griffin at center alongside Jared Dudley and Hedo Turkoglu in the frontcourt. The result was a four-point win for Los Angeles, and like the 101-99 victory on Sunday that tied up the Western Conference semifinals with the Thunder at two games apiece, Paul was the monster that made it happen.

In April, it was Paul putting former backup Eric Bledsoe in early foul trouble before tormenting MIP Goran Dragic into a 2-for-11 shooting night. But the Game 4 playoff bout on Sunday was another story with Paul matched up against Kevin Durant. It was a risky move by Rivers with all the height given up to the MVP, yet it was calculated. And it paid off in a major way.

Early in the fourth, Paul's steal atop the arc on a Durant crossover — and the ensuing layup — set the tone for the rest of the game.

The Thunder tried to attack the mismatch with 8:30 and an 82-70 lead, tossing the ball to Durant in the post, but he was quickly doubled by Paul and Griffin. Durant threw a blind cross-court pass that was easily picked off, leading to a Crawford layup. With 4:34 to play, Durant took one dribbled off the catch, pulled up without setting his feet and forced an off-balance mid-range jumper. It was a confirmation that Durant wasn't comfortable putting the ball on the deck more than once with Paul lurking.

Durant would again turn it over against a quick Clippers double with three minutes left, and a Collison transition dunk brought Los Angeles within 90-89.

The MVP took three shots in the final 10 minutes of the game, and his only success against Paul came off screens that wiped the Clippers guard out of the play. Russell Westbrook took on the scoring load as expected and went 4-for-10 in the quarter, but the Thunder's offense stagnated. All they had were contested looks in the paint that didn't drop. 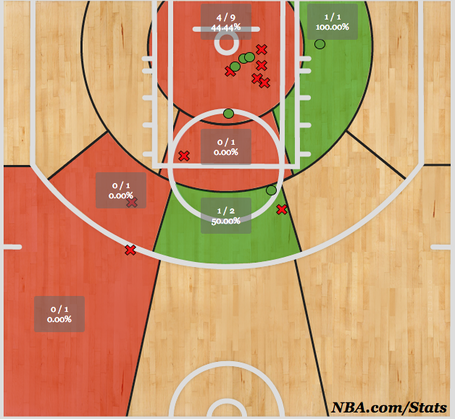 The bigger issue was stopping the Clippers from scoring.

Durant turning the ball over certainly didn't help the Thunder's cause, and it led to three Clippers layups. Los Angeles scored 12 fastbreak points in the final 12 minutes, 24 points in the paint and 38 points by only hitting one three-point shot. The Clippers also went 9-for-11 from the free throw line. 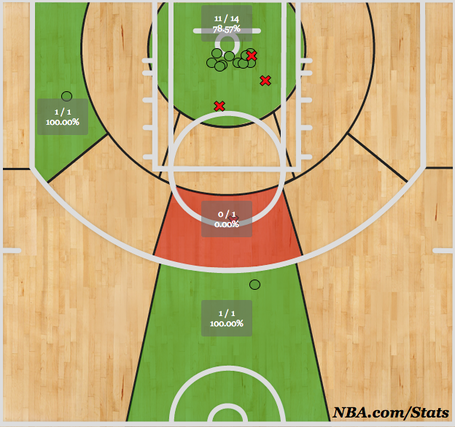 Los Angeles wasn't always scoring in transition, where Collison scored the majority of his 12 points in the final quarter. Paul had four assists out of the pick-and-roll, and Griffin went to the post and the foul stripe to score 10 in the fourth.

But the theme was that interior defense from a small ball unit and the early offense it created.

The Clippers toyed with small lineups of four shooters even in the preseason, and while the offensive advantages are somewhat obvious, what was most surprising Sunday was Paul's success on defense against Durant. After that, nothing the Clippers did was that surprising.

Call it a risky move by Rivers — he called it "desperate coaching" — but the fourth quarter matchups were not due to random, wishful decision making. It was all in the plan.