Share All sharing options for: The NBA's race problem for coaches is staring us in the face

The aftermath of the Mark Jackson firing has been filled with a whole lot of salt. But, beyond the particular specifics involved in the Warriors' situation, there's a story that applies to the wider NBA picture. In this week's Drive & Kick podcast, Marcus Thompson III and Paul Flannery dug into that and sparked some serious questions about the hiring practices of NBA teams.

Thompson -- who covered the Warriors brilliantly for years and is now a Bay Area columnist and the author of this piece -- discussed the lack of comfort in the relationship between Jackson and owner Joe Lacob, in addition to Jackson's defensiveness regarding Xs and Os, tactics and overall aptitude for the job. In the context of the historic coaching turnover we've seen in recent years, it made me wonder if this specific example of race potentially factoring into hiring/firing decisions can illuminate a broader picture and point to bigger truths.

I looked at NBA head coach hiring practices over the past 20 years, focusing on first-time head coaches. Why rookies? Because there's no directly comparable experience that goes into the hiring equation. The first time any NBA head coach gets the gig, it's a mystery as to how they'll do. It's based on feel, fit and/or how they did as a college coach or player or assistant. It's a lightly informed bet, really.

So, who do NBA teams bet on? 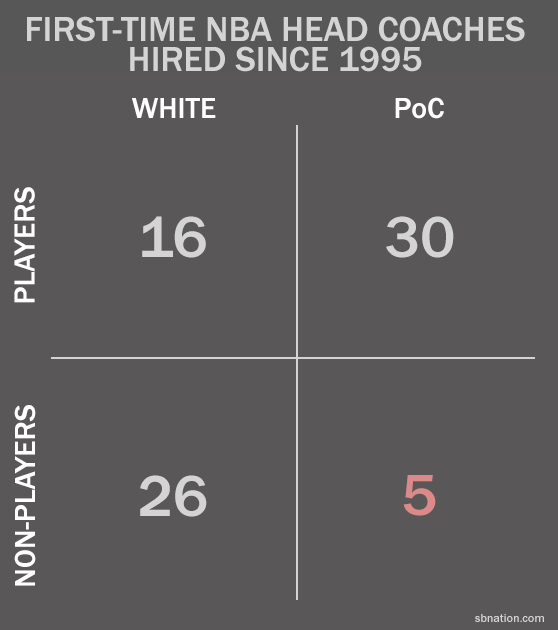 Those five coaches of color without NBA playing experience:

That's 77 rookie NBA head coaches hired over the past 20 years. Thirty-one of them never played in the NBA. Only five of those, or 16 percent, were coaches of color. This is in a league in which more than 80 percent of the players are men of color.

It's worth noting that, at least among head coaches hired for the first time within the past 20 years, non-players have been more likely to be successful. Among those, the coaches of color have better success, albeit with an admittedly small sample size. 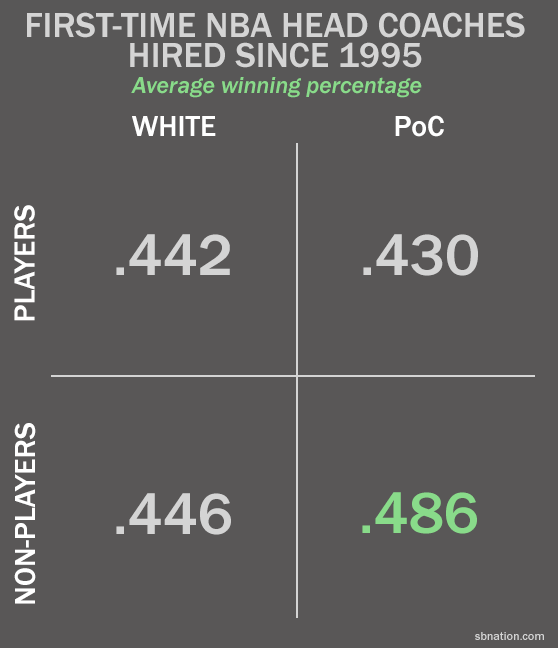 There's a LeBron Asterisk there, of course: two of the non-player coaches of color have split King James for most of his career. But Gentry (.475) and Casey (.449) are also above the average winning percentage for non-player white coaches. Only Hamilton, who got one dismal season with Washington, is below that level. The point stands: on average, non-player coaches of color have been the most successful subset of first-timers in the past 20 years, and they get the fewest opportunities, by far.

That point is made even more stark when you look at just the past five years, which have seen unprecedented coaching turnover. 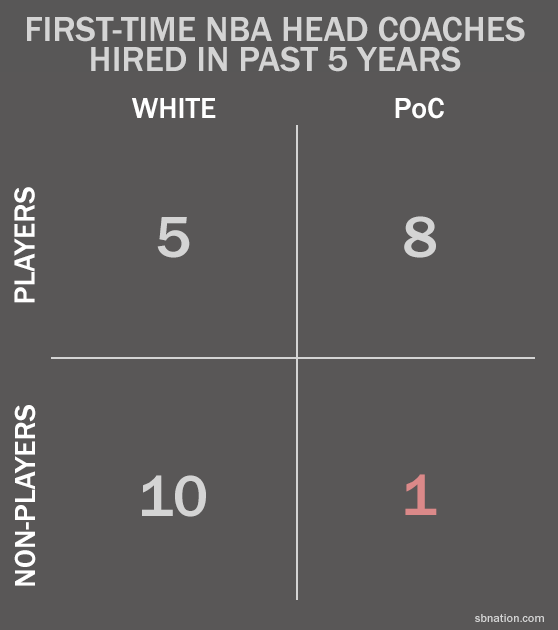 Last summer alone, nine rookie head coaches were hired. Seven were white. Six of those -- Brett Brown, Brad Stevens, Mike Malone, Steve Clifford, Mike Budenholzer and Dave Joerger -- had no NBA playing experience. Six in one offseason. And yet it has been a decade since any team hired a black rookie head coach who didn't play in the league.

Overall, 15 of the last 24 rookie head coaches (63 percent) hired in the NBA were white. Over the past 20 years, more than half of the first-time head coaches hired have been white, in a league in which less than a fifth of players are white.

The lack of opportunity given to black coaches, especially those who didn't play in the NBA, is staring us right in the face and it's only getting worse. None of the candidates being mentioned for the NBA's four open jobs will break the streak, either. The two head coaches hired this offseason are both white. That Gentry, with a good record, sterling reputation and appealing philosophy, is so far down most lists is telling.

If he can't get another chance in the big chair after the majority of teams have replaced their coach over the course of two years, how are younger black non-player coaches supposed to find an opportunity? The game is tilted. Which brings us to the why.

A daily column on the NBA.5/14: Don't change Russell Westbrook
5/14: The Bulls are addicted to grit
5/7: No job is safe for an NBA head coach
5/5: Which playoff loser is ready for success
5/1: D'Antoni leaves the Lakers on his terms
4/25: The Thunder's uncertain future

One NBA owner, Michael Jordan, is black. Another, Vivek Ranadive, is Indian-American. The other 28 are white.

Only five NBA general managers are black, and only two of them (Masai Ujiri and Billy King) never played in the league.

Now, between MJ and Vivek, they have hired three white non-player rookie head coaches in the past two years. And one of those black GMs, Rod Higgins, has been involved in multiple white non-player rookie head coach hires. Charlotte in general has the most diverse executive suite. Charlotte's recent coaching hires, however, prove that a diverse front office is not a guarantee of a diverse bench.

But there's obviously a trickle-down effect here. Non-player coaches typically come up through the ranks; of the six hired in 2013, only one (Stevens) was a college import. Without many GMs of color, we're less likely to get front office staff of color, which prevents future GMs of color from getting hired (unless they were players, and even then, at a lower rate than white former players). Without any coaches of color who didn't play in the NBA getting chances, developing diverse staff will be tougher. NBA teams are getting really good at hiring white NBA coaches and GMs who didn't play in the league, which shows others in that category -- like, say, Emerson College students -- that there's a path and a connection.

Where's the Emerson College pipeline for people of color?

people tend to hire those most like themselves. Social connections lead to hiring decisions.

It's not that these owners or GMs are racist. It's that people tend to hire those most like themselves. The story of Joe Lacob and Steve Kerr knowing each other from California golf clubs is a perfect example. Social connections lead to hiring decisions. It applies across the board -- MJ's propensity to hire his old buddies and Carolina folks is famous. But when 28 of the owners are white and there's little attention or effort paid to diversity, this is the result.

NBA owners have a lot on their plate right now, but I'm not sure there's a bigger structural problem than the growing tilt against coaches of color. The NBA is still ahead of other major sports in terms of leadership diversity, but it's headed in the wrong direction.

We talk about Donald Sterling's plantation mentality, but that's fish in a barrel. What about the NBA itself? This is a primarily black player pool, reporting to a primarily white coaching pool, hired by primarily white executives and getting paychecks from almost exclusively white team owners.