The Pacers' center controlled the lane on Sunday and reminded us why and how centers still dominate games, even in this day and age.

Share All sharing options for: Roy Hibbert shows why center remains the NBA's most important position

It may be the age of point guards, but center remains the NBA's most important position. The Indiana Pacers and Roy Hibbert offer a measure of evidence. When Hibbert struggled in the first two rounds, the Pacers struggled. When Hibbert's been alive, as he was on Sunday as Indiana smoked Miami for a Game 1 victory, the Pacers have looked fantastic.

What's odd about this situation is that Indiana never really relied on Hibbert's offense in the regular season. He was the team's No. 4 scorer at 10 points per game, shooting a painfully low percentage (44 percent) for a 7-footer. He used less than one out of every five possessions when on the court, which is typically the mark of an offensive role player, not an All-Star. 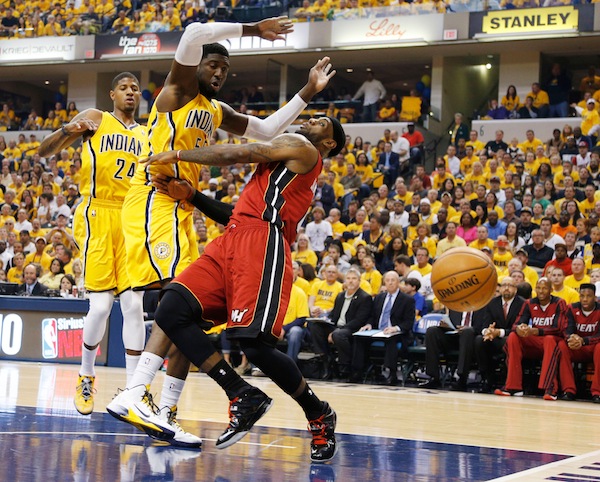 But, of course, Hibbert is an All Star because of his defense. He's one of the best stoppers in the league, using his 7'2 frame, long arms and smarts to make life difficult in the paint for opponents. Among the 77 players who defended at least five shots in the paint per game, Hibbert conceded the second lowest opponent shooting percentage. This is his skill: closing down the lane to aggressors. He's very good at it, and it's a very important skill to have.

So why did he struggle even in that category off and on during the first two rounds? The issue in Round 1 against the Hawks was a nightmare matchup with a perimeter-shooting big man in Pero Antic and an opposing team winning on jump shots. When Jeff Teague did drive the lane, Hibbert had usually already been burned a couple times on the step-outs. Shooting softened up Indiana's core, allowing Atlanta to get easier shots.

Home team has had the advantage

What we've learned in this postseason is that Hibbert appears to be seriously susceptible to the lack of confidence. It was apparent in the Atlanta series that when Hibbert got beat, or when he missed a couple shots, his whole game suffered. Some players can compartmentalize and play on. It appeared Hibbert could not.

The Washington series was a bit different, but in Indiana's wins, Hibbert tended to play well and battle Nene and Marcin Gortat evenly. When Washington won, it was because John Wall was being ridiculous, the Pacers couldn't score and the Wizards were shooting the lights out. Hibbert looked better than he had against Atlanta and more confident.

A daily column on the NBA.5/16: The NBA's race problem for coaches
5/14: Don't change Russell Westbrook
5/12: The Bulls are addicted to grit
5/7: No job is safe for an NBA head coach
5/5: Which playoff loser is ready for success
5/1: D'Antoni leaves the Lakers on his terms

But at no point in the first two rounds did he look more confident than he did in Game 1 against Miami. His success on offense — hitting some bunnies, putbacks and a couple of more creative half-hooks — made him rampage on defense. In particular, his presence and activity forced Chris Bosh to stay on the perimeter, where he was ice cold. He also closed the lane in half-court situations, forcing Dwyane Wade to take jumpers all day. (Wade happened to hit many of them.) Perhaps most importantly, he defended the rim without fouling: Miami took only 15 free throws, to Indiana's 37.

Miami attempted 24 shots at the rim on Sunday. Hibbert was in the lane for 10 of them, and the Heat only hit four. When Hibbert wasn't in the paint, Miami was 12-14 at the rim. He only came away with one blocked shot, but he altered a few more.

Having a defensive anchor at center is so hugely valuable, and that Indiana got theirs back in time for the long-anticipated battle with Miami is perfect. This isn't to say Indiana has a big advantage — the Pacers offense can't possibly keep scoring so efficiently — but so long as Hibbert is feeling confident, Miami is going to be forced to get out on the break and hit jumpers to rack up points. They can do it, but it's tougher than the alternative.