The big Andrew Wiggins scouting report: Unlimited upside should make him the No. 1 pick

Kansas' freshman phenom was the No. 1 college prospect a year ago, and he's our No. 1 prospect in the 2014 NBA Draft despite a few warts that may limit him early in his career.

Share All sharing options for: The big Andrew Wiggins scouting report: Unlimited upside should make him the No. 1 pick

Before he arrived in Lawrence, Andrew Wiggins was a child prodigy with impossibly high expectations. Despite some bumps during his only year at Kansas, he's still one of the top prospects in the 2014 NBA Draft because of his incredible athletic gifts.

Wiggins is a human pogo stick with go-go-gadget arms. He doesn't jump, he levitates off the ground -- It's almost as if he pauses in the air before returning back to earth. When he finally lands, he has the ability to pop right back up. Wiggins' second jump is incredibly quick and makes him deadly on the offensive glass.

Wiggins uses his athleticism best on defense. He's extremely quick laterally and can recover back to his man faster than anyone in the draft. He's fast enough to stay in front of smaller guards and tall enough to guard bigger wings. Wiggins was essentially unstoppable on the break at the college level, scoring 1.3 points per possession in transition -- fourth best in DraftExpress' Top 100. He can catch oops from the wing or handle the ball himself.

It's when the game slows down that Wiggins struggles most. He's not very good at maneuvering through traffic, often dribbling too high in the air while being too reliant on his right hand. This hurts his ability to create offense for himself and others in half-court situations. He also frequently settles for long pull-up jumpers in the pick-and-roll because he isn't capable of splitting defenses or making advanced dribble moves towards the basket.

Longtime Boston Celtics front office member and current Phoenix Suns GM Ryan McDonough told SB Nation's Paul Flannery that he watches at least three games for every top prospect: their best performance, their worst performance and a game somewhere in the middle. We'll use this process with each player we profile, starting with Wiggins.

Wiggins had other very good outings -- 30 points against Oklahoma State, 26 and 11 at Florida -- but this was the game in which he looked like a budding NBA superstar.

Kansas was without Joel Embiid, so West Virginia focused its defensive attention exclusively on Wiggins. The Mountaineers denied him the ball and pressed out hard against his body to force him to dribble. He answered by blowing past West Virginia's guards on his way to the rim.

Wiggins got his shot going from the free throw line in the first half and carried that aggressiveness to the second. He scored 24 after intermission, netting two shots from deep, a couple of one dribble pull-ups and several drives to the rim. His most impressive sequence came late in the game when he drained a hesitation pull-up three on the right wing and ran down to cover the inbounds pass, stole it under the rim then slammed it home.

Wiggins got to the free throw line 19 times, netting 15 freebies. On the season, he shot almost eight free throws per 40 minutes, hitting 78 percent of those attempts. When he was getting to the line, he was nearly impossible to defend. He shot eight or more free throws on nine separate occasions and averaged 24.4 points in those outings.

But he still turned the ball over four times. Two turnovers came on back-to-back sequences near the end of the first half. Kansas cut the lead to nine points, then Wiggins lost the ball dribbling with his left hand. On the next play, he was stripped in traffic when he tried to make something out of nothing. Both turnovers resulted in West Virginia buckets. Here you can see the second play: 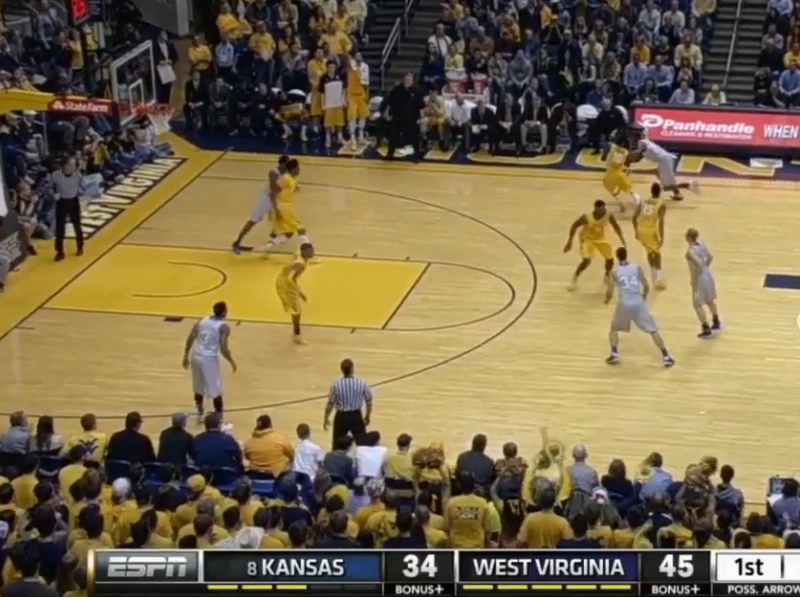 He catches the ball on the right wing and immediately makes his move toward the sideline. 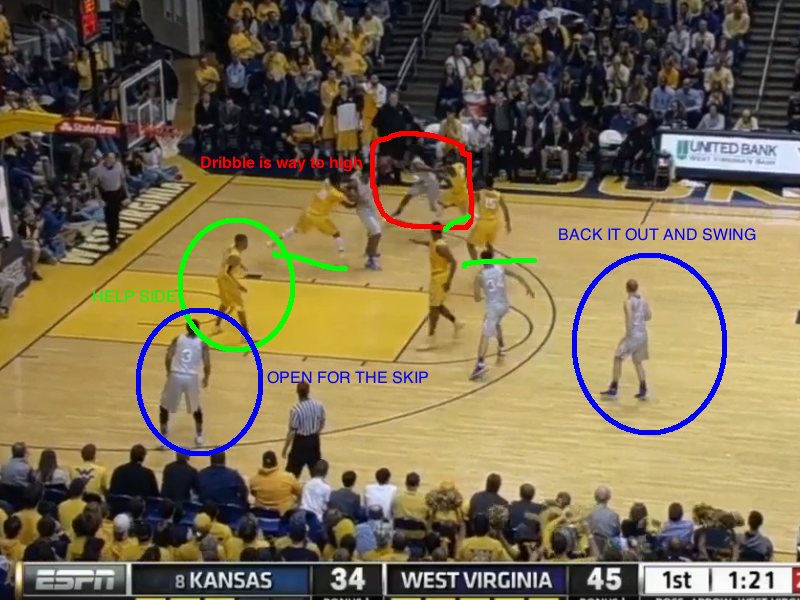 The defense collapses, but Wiggins still tries to turn the corner. If you look closely, you can see that he's dribbling the ball near his head. If the ball were closer to his body, he might have been able to pull the ball back out to the perimeter. Instead, he's already headed to the teeth of the defense, where four Mountaineers await. 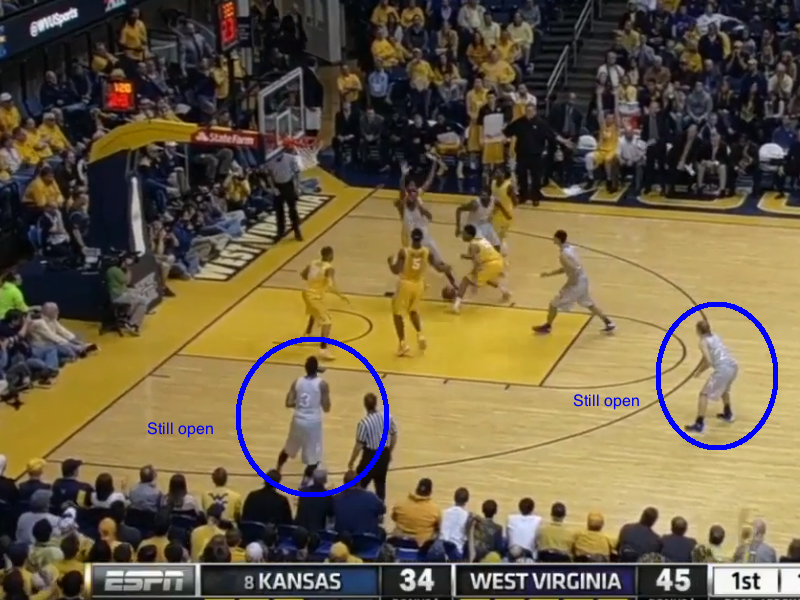 West Virginia digs down and strips the ball from him.

The problem with not being a natural ball handler is that you have to exert extra energy and attention to actually dribbling the ball. If Wiggins had a better handle, he may have been able to weave his way through traffic or corral the ball and pull it back out. He also could have kept his head up and noticed his two open teammates spotted up on the perimeter. But because he's so focused on maintaining control of the ball, he misses that read. Wiggins is aggressive here, which is nice to see, but he doesn't have the requisite skills to make something good happen.

Still, this game showed just how high Wiggins' ceiling is when he's consistently aggressive on both ends of the floor.

Stanford's defense bothered Wiggins badly in his final college game. The Cardinal packed inside the arc in a 2-3 zone and forced Kansas to shoot from deep. When Wiggins touched the ball, all five Cardinal players would turn their head towards him. When he made a move to the paint, the defense shifted to stay in front of him.

Wiggins turned the ball over four times, with the worst turnover coming late in the final minute of the game. He caught a handoff and attacked his defender to create contact and spin back into the lane, but ran into four Stanford defenders. The ball was stripped and Stanford took possession on a jump ball.

Wiggins was criticized for being too passive in this game, but the real problem was where he was on the floor before he caught the ball. He mostly hung around the wings, and when he did get the ball, at least two Stanford defenders were in his face and others were watching from the opposite side of the court.  He simply had nowhere to go. 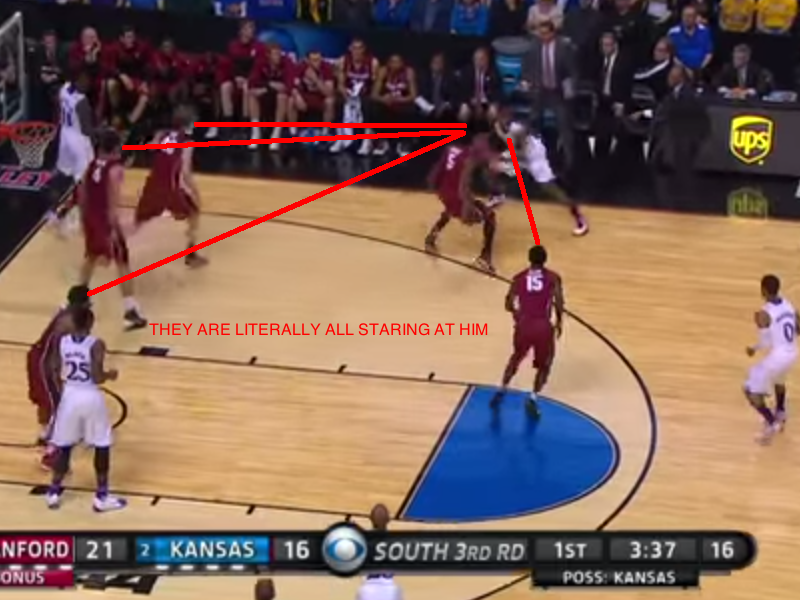 Wiggins actually makes a very nice play in this situation, dribbling down the sideline and skipping the ball to a wide open Conner Frankamp (bottom of the screen), who nets a three-pointer. There were other situations where Wiggins made the right pass, but his teammates couldn't convert or wouldn't shoot the open jumper.

This was a bad game and horrible stat line for Wiggins, but one game doesn't make or break a player, and there were still signs for optimism.

Somewhere in the middle: Texas, February 22

This is what we came to expect of Wiggins this year -- efficient scoring, modest rebounding, a couple of blocks, a steal and no assists. Most of his production came early in the game. He started 5-of-6 from the field and 3-of-3 from deep for 15 points in the first 12 minutes. After that, he sat back and played conservatively, allowing his teammates to get involved.

Wiggins made several highlight plays in this game, but his most impressive basketball play was on his fifth bucket. He had already knocked down two long balls and had just finished an impressive backdoor alley-oop. Then, he hit another three on the next possession:

Here, Wiggins catches the ball on the right wing and makes a move to his left. When the defense sinks in, he kicks the ball out to his teammate -- a nice, simple pass that doesn't show up in the box score, but demonstrates his understanding of the game. Then, as the defense shifts over, Wiggins steps back behind the line. He gets the ball and sinks a wide open three.

It was a small moment, but it showed Wiggins' maturity. He was patient and didn't force the action just because he was in a groove. He could have shot a contested, pull-up jumper on that possession and nobody would have blamed him. Instead, he makes the right pass and it results in a better, high-percentage shot.

Wiggins has the frame and athleticism of an NBA superstar. He's a very good defender with an improving jump shot -- he shot 34.1 percent from deep on 4.4 attempts per 40 minutes, via Basketball-Reference, and netted 1.1 points per possession as a spot up shooter, per DraftExpress.

Wiggins will struggle creating offense in half-court situations in the NBA until he tightens his handle and masters a few more moves, but that can improve over time. His ceiling is so high because he is physically capable of making any play. That's why he's SB Nation's No. 1 prospect in the 2014 NBA Draft.