The Cleveland Cavaliers jumped from the No. 9 spot in the NBA Draft lottery all the way to No. 1 for the third time in four years.

The draft lottery is in the books, and somehow the Cleveland Cavaliers won again. Despite having just a 1.7 percent chance of winning, the Cavaliers rose to the top spot for the third time in four years, an unprecedented run.

The Milwaukee Bucks, who had the best chances of winning, finished second. The Philadelphia 76ers will pick third. Here's the lottery draft order in full. The entire draft round, of course, won't be finalized until after the NBA finals. 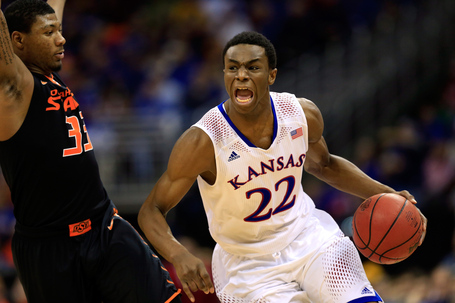 The obvious big winners were the Cavaliers, who overcame just a 1.7 percent chance at the top spot and vaulted from No. 9 to No. 1. No matter who Cleveland goes with, they'll almost certainly draft someone better than the 2013 No. 1 overall selection of forward Anthony Bennett, who started no games as a rookie and averaged just 4.2 points per game.

After finishing the season a dreadful 15-67, the Milwaukee Bucks were awarded the second-highest spot in the lottery, despite 250 of the 1,001 drawing combinations giving Milwaukee the top pick. The offense-starved Bucks' top priority in the draft was almost certainly Kansas small forward Andrew Wiggins with the selection, so getting bumped out of the top spot may have hurt.

Philadelphia's build for the future continues with not only the No. 3 pick coming via lottery, but ownership of the Pelicans' spot at No. 10, as well, thanks to the 2013 draft-day trade that sent Jrue Holiday and Pierre Jackson to New Orleans for injured star Nerlens Noel (the 2013 No. 6 pick) and 2014 pick.

The lottery was a bitter pill for the Detroit Pistons to swallow, with the fortunes of the Cavaliers pushing the Pistons' pick out of the top eight, where it had been protected. Instead, the pick goes to the Charlotte Hornets as part of a 2012 trade involving Corey Maggette and Ben Gordon.

Also unlucky were the NBA's longest-reigning titans, the Boston Celtics (fifth in lottery odds coming in) and Los Angeles Lakers (sixth). Neither team was able to move up, and with Cleveland's ascension each team moved down one spot from their projected draft positions.