The big Jabari Parker scouting report: Born to get buckets

Duke's freshman stud is a high-volume scorer with an NBA-ready body. That's why he's our No. 2 prospect, despite some concerns about his defense and shot selection.

Share All sharing options for: The big Jabari Parker scouting report: Born to get buckets

Before Andrew Wiggins reclassified to the 2013 college basketball class, Jabari Parker was the top guy. He quickly reminded us that in his first month at Duke where he got off to a blistering start, averaging 23.6 points and 8.7 rebounds on 60 percent shooting from the floor through his first seven games.

Parker's overall skill level is absurd for his size: He's huge (6'8, 240 lbs, 7' wingspan), but he handles the ball like a guard. He can beat slow-footed power forwards from the perimeter with a mix of advanced dribble moves, but he's strong enough to bully thinner forwards on the block. Parker can drive with his left or right hand and finish through traffic with either. He also has deep range, shooting 36 percent from behind the arc in his freshman season.

In transition, Parker is a one-man wrecking ball. He can grab a defensive rebound and fly up the court by himself or finesse his way past a flurry of defenders. He doesn't run as fast or jump as high as Wiggins, but he's still a very good athlete.

Parker's issues break down into two categories: Defense and shot selection. He struggles defending faster wing players out on the perimeter because he doesn't sit down in a defensive stance. Instead, he stands hunched over, making it easy for opponents to drive past him.

On offense, Parker tries to do too much when nothing is there. He shot the ball efficiently out of conference, but struggled against ACC opponents, shooting just 45 percent from the floor and 30 percent from deep in conference play. He'll force up poor shots. There are five white jerseys in the screen here:

There are 20 seconds left on the shot clock when Parker shoots this step-back jumper. Notice how Rodney Hood is literally trying to get out of the way: 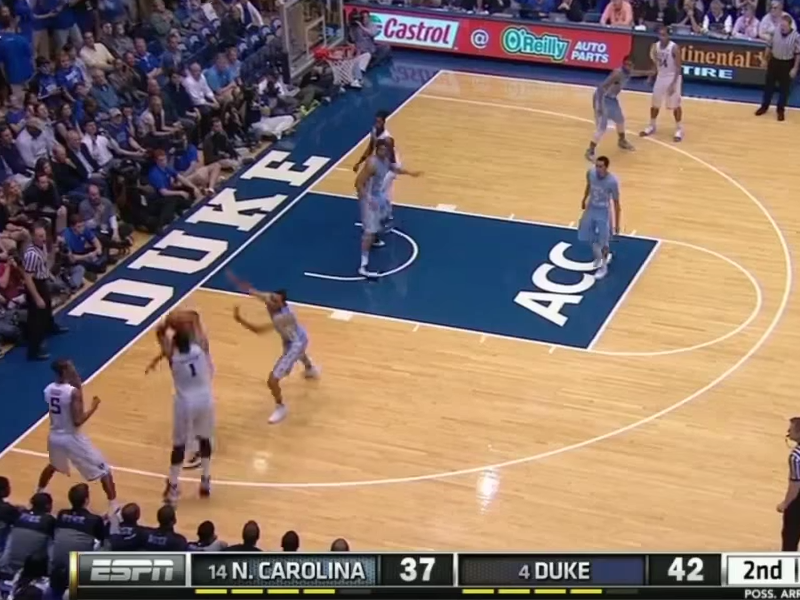 Longtime Boston Celtics front office member and current Phoenix Suns GM Ryan McDonough told SB Nation's Paul Flannery that he watches at least three games for every top prospect: their best performance, worst performance and a game somewhere in the middle. We'll use this process with each player we profile.

Parker scored over 20 points in his first seven games at Duke, but he saved his best performance for the Tar Heels. North Carolina started with James Michael McAdoo single-covering Parker, then tried Brice Johnson on him, then tried a 1-2-2 zone, but nothing worked. Parker was aggressive from the start, attacking both McAdoo and Johnson on the block.

He does, however, get shot happy at times. Take this play in the first half for example: 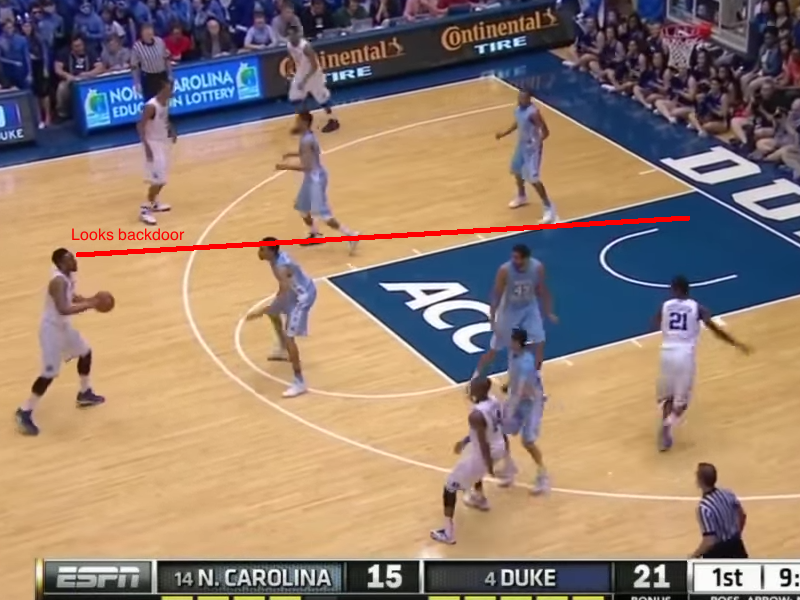 Parker catches the ball up top and correctly looks for the backdoor cut. Nothing there. 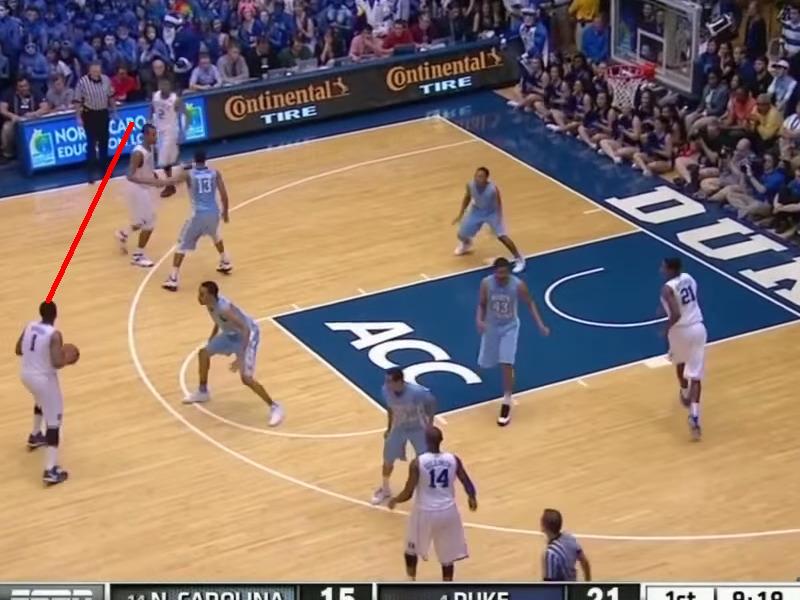 Then he checks the action on the other side. Quinn Cook doesn't set his man up, and Hood doesn't set a very good screen, so that's not open either. 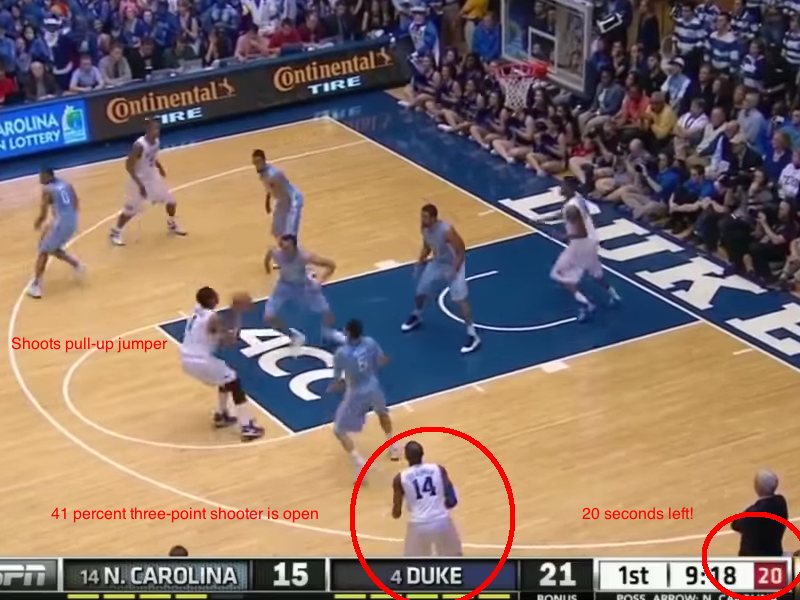 Parker looks up and panics. He makes a crossover move into a pull-up, fall away jumper that clanks off the back rim. This wouldn't have been an issue if it happened late in the shot clock, but there is still 20 seconds left. Also, he fails to set up Rasheed Sulaimon, a three-point marksman, who is open on the right wing.

Coach Mike Krzyzewski took Parker out of the game after that shot, and Parker responded positively. On his first possession back, he found a gap in the defense and sealed off McAdoo. When he received the pass, he attacked the basket, forcing McAdoo into his third foul and taking him off the floor. On Duke's next possession he made this beautiful kick out pass in transition:

He could have went straight for the rim there and forced up a bad shot, but he made a smart pass out to Hood. For the rest of the game, he aggressively attacked UNC's defenders in the post. When the Tar Heels tried to play a zone, Parker patiently found gaps and knocked down mid-range shots. His entire offensive arsenal was on display: he used an up-and-under move, a left handed scoop shot, a floater and knocked down two long range shots.

Parker's shortcomings were magnified on a national stage in this NCAA Tournament loss. He was careless with the ball and struggled to defend the smaller Mercer forwards out to the perimeter. He was late on rotations and helpless in trying to maneuver around screens. In the last minutes of the game, Krzyzewski subbed him out on defense.

Take this play in the first half for example: 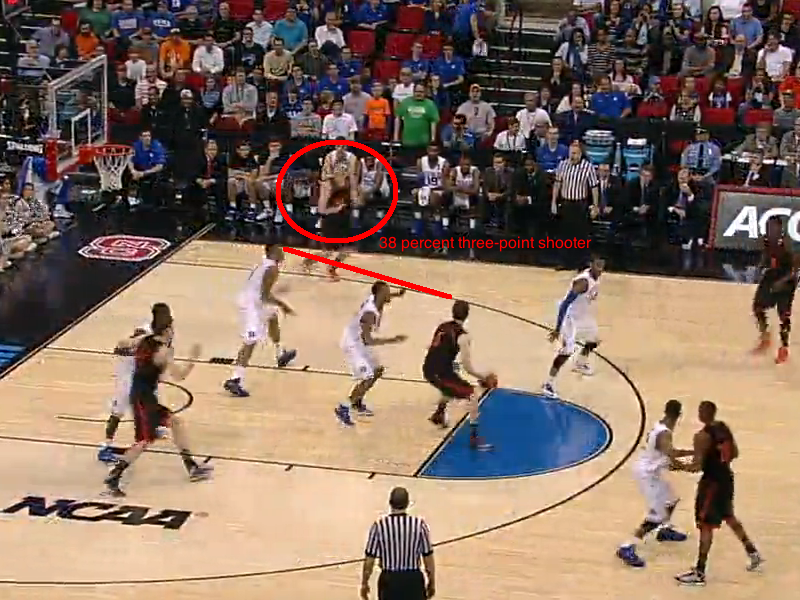 Parker is out of position, too far towards the the rim and not close enough to his man, Jakob Gollon, who is a 38 percent three-point shooter. 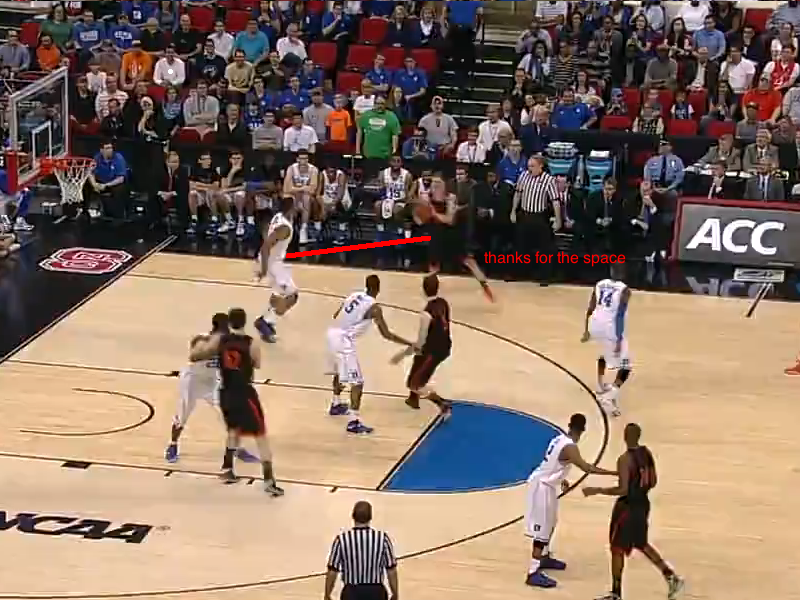 When Gollon catches the pass, Parker shows little effort to get out and contest the shot. It's OK if Parker doesn't know exactly where to be at all times on defense, but he has to show a better effort. This happened all game: he loafed around screens and meandered around the paint. That's unacceptable, but it's also what we saw from Parker all year.

To his credit, Parker played out of position at Duke. He can play power forward in small lineups, but he will need to play alongside a shot blocker. Duke tried playing him at center for stretches; an NBA team won't do that. Parker's defense is why Andrew Wiggins is ahead of him on our big board.

But his defense isn't broken: Parker is quicker laterally than he's given credit for, and he can stay in front of his man when he's engaged. He just needs to be locked in more often.

Parker's best quality is his ability to create shots on offense. Against Mercer, he continued to attack the hoop, even when things were going wrong. He missed some open looks and turned the ball over four times, but it was nice to see that he was still driving to the hole.

Somewhere in the middle: Syracuse, February 22

This was the type of performance we came to expect from Parker: Scoring from all over the floor and good rebounding numbers. He did turn the ball over five times, but the majority of those came off traps from Syracuse's zone. Parker figured out the zone as the game progressed.

He played mostly along the baseline on offense, running from corner-to-corner and flashing to the middle when he found a seam. Good things happened when Duke got the ball to him in the middle: he attacked the lone big man or found shooters on the perimeter. Parker netted three shots from deep, four free throws and tipped in a huge put-back jam.

But what I liked most was Parker's attention to detail on defense. Parker played with energy on that end from the start. C.J. Fair, Syracuse's leading scorer, scored just 12 points and turned the ball over four times. Earlier, I mentioned that Parker's lateral foot speed is better than people realize. Watch him slide his feet left, then right, forcing Fair into a turnover here:

Players with Parker's size and skill are rare. In the NBA, he'll be able to play power forward in smaller, hybrid lineups, just like LeBron James and Kevin Durant. But he'll also play on the wing. His main issues -- shot selection and defensive effort -- are both fixable under the right coach.

With an NBA ready body and impressive offensive game, he'll be next season's favorite for Rookie of the Year. Parker's the most skilled player in the draft and will slide into a starting lineup immediately, where he'll be a very productive NBA player for the next decade-and-a-half.