Setting screens is not a lost art

You'll hear many old-timers lament the "lost art" of proper screen-setting in the NBA. Don't listen to them. It's actually a changed art, one that's more complex than ever.

Share All sharing options for: Setting screens is not a lost art

As I watched Marcin Gortat work his "Polish Hammer" magic earlier in the playoffs, I found myself admiring his screen-setting ability. This is a little thing that might go unnoticed, but that made a huge difference in the Wizards' playoff run attack. Given that NBA offenses revolve so much around screening, especially in the pick-and-roll, it got me thinking about the different facets of setting good screens. What new types of picks are fully incorporated into modern NBA offenses?

I always hear that NBA players just don't know how to set a solid screen anymore. A lack of old-school fundamentals, they say. Damn that AAU basketball!

In reality, the nature of setting screens has changed along with the style of NBA offenses. The full-body, bone-crushing pick that frees up a jump shooter isn't always as important as forcing the screener's defender to make a decision that will make the other players on the defensive string also make a decision. Who helps? Who helps the helper? Do I come off that corner shooter to deal with the ball handler or roll man? It always comes back to making the defense make a decision.

Having said that, what makes a good basic screen? Most notably, the ability to establish a strong athletic position with your legs a little bit wider than shoulder-width apart. Ideally, you should be sitting down in an athletic posture with your knees bent and body stationary, allowing your teammate to set his man up and cut tightly off of your top shoulder. Your hands can either be covering your nether regions or in on your chest. The old-school, full-body screen.

When most fans think of good screens, they imagine the screener stopping the defender dead in his tracks as the ball handler comes off of the screen with speed into a beautiful drive or mid-range pull-up jumper.

But that's the thing: you don't always want to stop the on-ball defender. Sometimes, you want to force the defender to actually get over the screen and trigger the rest of the defense to react to your action. Rather than a lower-value medium-range jumper, you want to end up with a strong roll to the rim, a free throw, a pop for a jumper or a drive-and-kick pass for an uncontested three. Points per possession, kids.

Thus, here are a number of different types of picks that are prevalent in the league today.

For the above reasons, one of the bedrocks of Mike D'Antoni's "7 Seconds or Less" system is the ability to set this kind of pick. Rather than set a screen where you square and split the on-ball defender's shoulder and hip, you set your screen at a 45-degree angle on the bottom side of the defender. Basically, you set the screen on the defender's ass, not his hip.

Why would you do such a thing? To force the on-ball defender to have to come over the top of the screen. You get just enough contact to delay the defender chasing the ball, but because of the angle, he has no choice but to fight over the top. You take away the defender's choice to slide under the screen.

In reality, you are forcing the screener's defender, usually a big, into making a decision on how to play the ball handler. When running pick-and-roll, it's all about playing against the screener's man.

By forcing the on-ball defender over the top, he is going to be a fraction of a second behind the play. The defending big man now must make a decision. Does he play the ball, or hang back and try to guard the rolling (or popping) big man? The dominoes are now falling, as the other four defensive players must start making help decisions.

Sometimes, you don't even need to make contact on the bottom side screen. The mere threat of a high or wing ball pick gets the screener's man repositioning himself immediately in anticipation of the screen. This was the old Shawn Marion-style action with those very same Phoenix Suns teams. At their best, Marion's brush screens were almost a touch-and-go type of situation. The Matrix never laid wood on anyone, but his "screens," or the threat of his screens, were often just as effective at opening up multiple options for his teammates.

Growing with the Spurs

The San Antonio Spurs have always been for grown-ups. Are we ready to enjoy that? Here's an argument that we should be.

Growing with the Spurs

A specialty of the San Antonio Spurs, and especially Mr. Tim Duncan. Timmy's robotic consistency can often hypnotize the viewing public, but his screen-setting is an outstanding combination of good fundamentals and some sneaky techniques. The "Flat Screen" is an excellent example of creating a new screening angle that previously didn't exist on a high pick-and-roll.

A flat screen is executed with basically a zero-degree angle on the on-ball defender. The screen setter on the high pick-and-roll slowly pushes right up behind the defender, with his hips parallel to the defense. The on-ball defender feels the contact, but doesn't know which side it is coming from. Duncan's defensive man must guess the side without knowing where the ball handler is headed.

Then, once Timmy is pressed flat against the rear of the on-ball defender, he can quickly turn slightly to either side depending on the direction the guard is headed. This creates just enough contact to slow the defender down. Again, the defensive dominoes begin to fall. 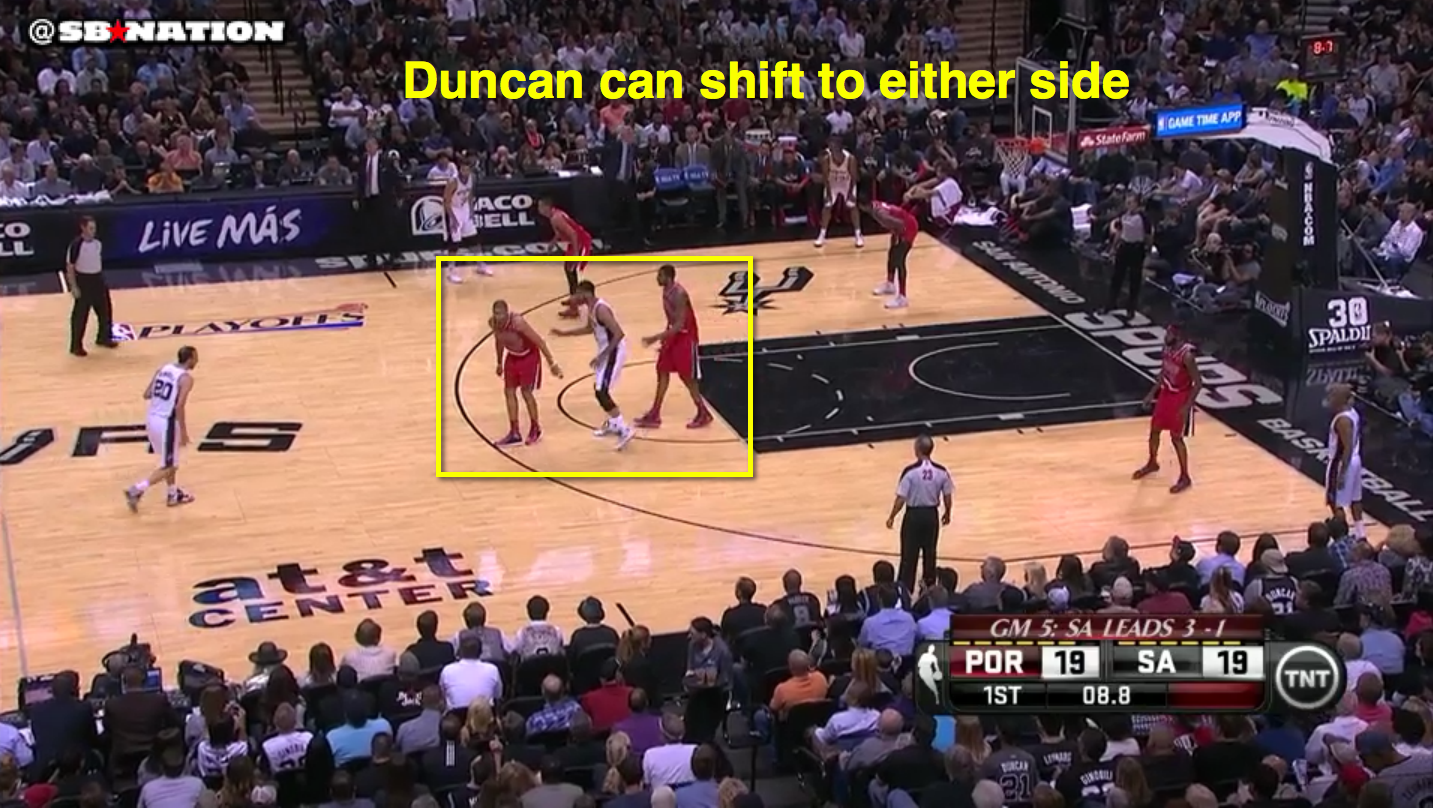 Because so many defenses intentionally push all high pick-and-rolls to one side -- which allows every defender to consistently know what's coming next -- the offense has reacted by "flipping" or "turning" their screens. Watch as the big man setting the screen slowly sets up on one side of the defense and then quickly rotates underneath the on-ball defender to set a screen on the opposite side.

"Flipping" the screen becomes a crucial counter when the defense tries to push the wing pick-and-roll down towards the baseline. You can usually see the man setting the pick against a "blue" turn from the top side of the on-ball defender to the baseline side, especially if the defender has not attached himself to the ball handler's hip.

Setting picks in transition, especially on the delayed fast break, is another way of using screens effectively in modern NBA offenses. The second wave of the fast break is when the defense is still searching for its matchups and scrambling to catch up to the offense. Ironically, the majority of the "7 Seconds or Less" fast-break buckets in Phoenix usually came in the 20-16 second phase of the shot clock.

As the first wave of the fast break slows down, the trailing big players look to follow the ball handler and angle into screens. They "drag" behind the play and set a screen (or screens) for the point guard. Usually, the big should then roll hard to the hoop, not necessarily to get the ball, but to occupy the defense and open up the possibilities of kickouts from the point guard to the shooters surrounding the three-point line.

But if you roll hard and consistently enough, you'll be rewarded with dunks and layups sometimes. Yes, I'm talking to you, Pau Gasol.

The step-up screen occurs from the wing position, often when two guards are involved. A wing player has run hard to the corner, but the ball hasn't been passed ahead. As the player moves back up to the wing from the corner, rather than receiving a pass, he sets a screen for the ball handler to move swiftly down the sideline and towards the baseline. The screener's back is to the baseline and he can open up quickly for a little slot pass on the roll or just pop for a quick jump shot.

So, modern NBA players aren't necessarily poor screen setters after all. They are playing within systems that require their movements to force defenders to react and make decisions. That is why these different screens are still highly effective, even when you don't rock the defender or totally free up your ball handler.

The changes in NBA rules and advances in scouting and defensive techniques have made the setting of screens an evolutionary process.

There is, however, something to be said for the good old-school screeners. The Gortats, Nick Collisons, Duncans, Amir Johnsons, etc. Sometimes, you just want to knock down a defender like a bug splattered on the window screen. That must be the Canadian hockey player in me coming out.