The big Joel Embiid scouting report: KU big man is the No. 1 pick ... if he's healthy

The Kansas product has a rare combination of size, grace and athleticism. Lingering back trouble is the only reason he's currently No. 3 on our big board.

Share All sharing options for: The big Joel Embiid scouting report: KU big man is the No. 1 pick ... if he's healthy

Andrew Wiggins and Jabari Parker headlined the Nov. 12 matchup between Kansas and Duke until 7' Cameroonian Joel Embiid checked into the game. Embiid only logged 20 minutes that night, but made his presence felt, grabbing seven rebounds, assisting on five shots and fiercely pinning a Duke layup attempt against the backboard.

Kansas coach Bill Self learned that night that he had a freak of nature sitting on his bench. For the next month, Embiid, who started playing basketball in 2011, earned limited minutes, providing a presence on the boards and a deterrent in the paint, until he secured his first start against Florida. He didn't lose the starting gig until a back injury ended his season just weeks before the Big 12 championship.

Despite shortcomings in court awareness, a problem directly connected to his limited experience, Embiid is an eraser in the paint, thanks to his absurd 7' frame and 7'4.5 wingspan. It doesn't matter if he's in the right spot. He's so big and athletic that he can cover an enormous amount of ground.

But it's Embiid's offense that makes his ceiling so high. He isn't uncoordinated like most 7-footers. Embiid is graceful, and able to use both hands around the rim with a soft touch in the paint. You wouldn't know by his footwork that he's still relatively new to the game. He has an array of up-and-under and spin moves, and he even broke out a Dream Shake last season.

Embiid is, however, limited by his lack of experience. He's sometimes lost on defense, fouls often and can be a turnover machine against swarming opponents. Embiid averaged 5.8 fouls and 4.1 turnovers per 40 minutes, and played just 23.1 minutes per game as a result.

Embiid has all the tools to be a dominant NBA big man, but he needs coaching and a franchise that is willing to be patient.

Throughout our profile series, we've used Phoenix Suns GM Ryan McDonough's method of scouting, as described to SBNation.com's Paul Flannery. We take an in-depth look at three games: A prospect's best and worst performances, and another somewhere in the middle. That way, we can project his ceiling, understand his weaknesses and find a medium.

Kansas jumped out to a huge lead in the first half and Embiid was a big reason why. Texas single-covered him with Cameron Ridley, a 6'10, wide-bodied NBA prospect in his own right, and Embiid went to work. On Kansas' second possession, Embiid pushed Ridley to the paint and hit him with a left hook, getting fouled in the process. Embiid went right at Ridley again on the very next possession. Watch how patient he is:

That isn't something Embiid would have done in November or December. He catches the ball, feels the double-team coming from the perimeter and kicks the ball out to an open Wayne Selden. Selden promptly zips the ball back to Embiid, and the big man sinks a turnaround jumper before Ridley can react. That's a wise play, years beyond Embiid's experience.

A few possessions later, Embiid gets the ball on the right block. This time, the defense digs down and he kicks it to a wide-open Wiggins, who knocks down the three-pointer. Again, Texas doubled. Again, Embiid made them pay.

But it wasn't just his work on the block that impressed. Midway through the first half, Embiid set an on-ball screen, popped and smoothly netted a jumper from the elbow. Minutes later, he beat his man down the floor in transition:

He had gaudier numbers in some other games, but I loved the patience and poise he played with against Texas. He scored efficiently in different ways, found shooters out of double teams and controlled the paint on defense. This is what any NBA team drafting him hopes he can one day provide on a nightly basis.

Embiid didn't have many bad games to choose from, since he shot less than 50 percent from the field just four times, but against Baylor, he didn't didn't score until five minutes left to play. He struggled with foul trouble and missed his first five shots from the floor.

He also struggled taking care of the ball against Baylor's NBA-sized front court duo of Isaiah Austin (7', 7'4.5 wingspan) and Cory Jefferson (6'9, 7'0.5 wingspan). Baylor played a zone and trapped Embiid any time he touched the ball in the short corner. 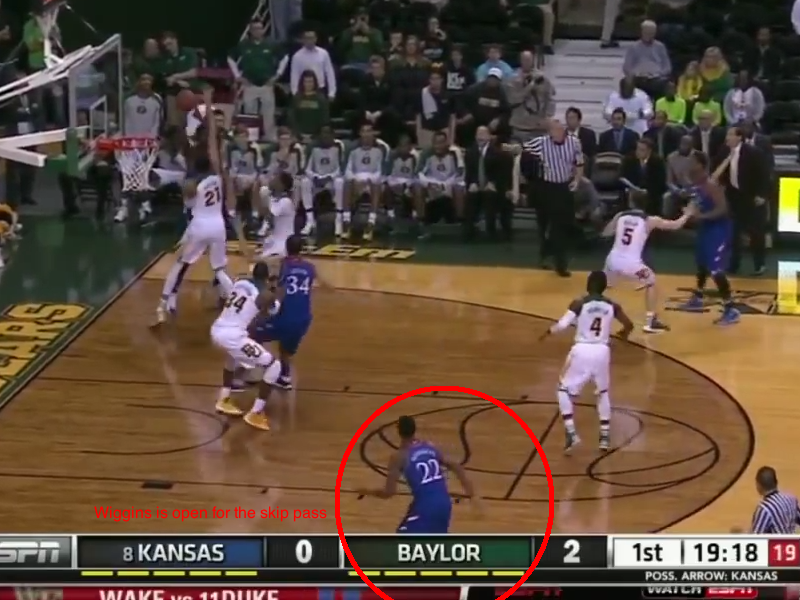 Embiid panicked when he saw the double team and forced a pass to Perry Ellis despite having an open Wiggins on the wing. Baylor trapped like this a few minutes later in the opposite corner. Embiid tried to spin his way out and was called for a charge.

Embiid matched up on the defensive end with Jefferson, because Austin is more of a perimeter player and Bill Self wanted to keep Embiid planted in the paint. But Baylor countered by having Embiid run through a series of pick-and-rolls with Jefferson. Jefferson started the game by hitting his first three shots. Watch how Embiid loses Baylor's big man in transition:

Embiid picked up his third foul three minutes into the second half and was subbed out. He picked up his fourth foul at the 12:56 mark when he recklessly tried to block a shot.

But I love how he responded when he got back in the game. Embiid checked in with fewer than five minutes left and Baylor tried to force him into a fifth foul. Rico Gathers went through Embiid's chin in the post, but Embiid moved his feet and contested without fouling, getting a piece of the ball near the rim. A few possessions later, Baylor sent Embiid through a pick-and-roll. Embiid hedged hard, recovered back to Gathers and contested an aggressive post move.

The 7' Cameroonian struggled early on both ends of the floor, but in the last five minutes, he scored all five of his points and played defense without fouling. That's impressive.

Iowa State was a tiny team that ran the floor and shot a ton of threes. The Cyclones didn't have anyone nearly big or athletic enough to defend Embiid one-on-one, so they double-teamed every single time he touched the ball.

It worked in the first half, forcing Embiid to become impatient when he felt the double team coming. He stood straight up, getting out of a basketball position, and threw the ball away several times.

That changed in the second half. Embiid dominated the final 12 minutes on both ends of the floor. Iowa State continued to send double teams, but the big man figured out how to read the defense. Look what happens when Embiid realized that he could kill Iowa State if he just moved before the second defender got to him:

That's a bullet right into the shooting pocket. 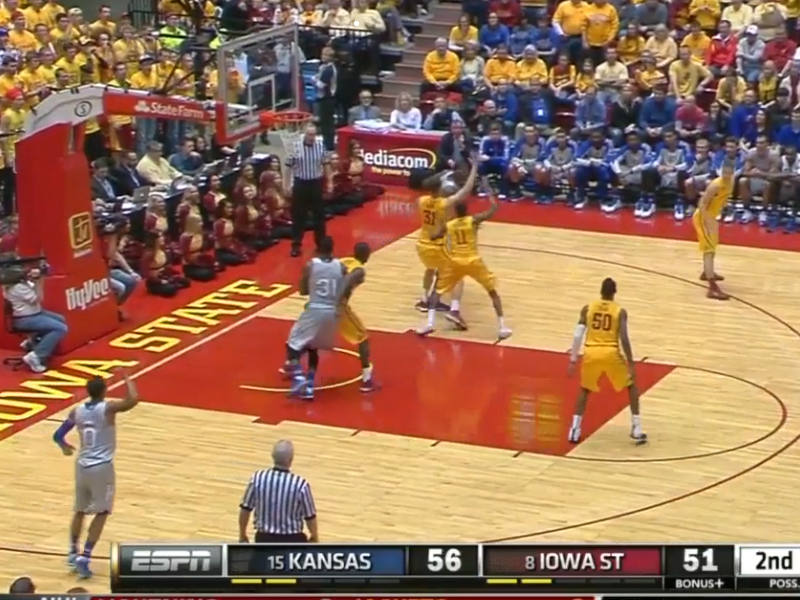 Embiid kept his head up and backed away from the second defender. Notice how Mason is wide open in the opposite corner. Just a few possessions before, Embiid found Mason for a layup. 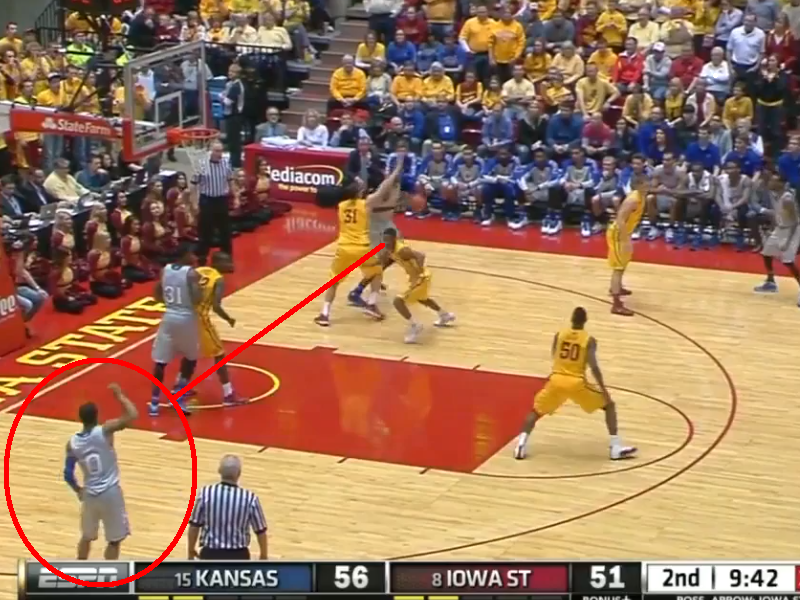 The extra defender saw that Embiid backed away from the double and retreated back to Mason, who just burned him in the same situation moments earlier. In response, Embiid blew right past the single coverage for a layup.

Embiid made the right decision out of the double team over and over in the second half. That's exactly what you want to see.

Embiid is an enormous and athletic big man who is much further along in his development than anyone expected. Big men this skilled can shape the direction of an NBA franchise. He has issues with fouling and turning the ball over, but both of those problems should get better with the proper coaching.

However, that back injury, a lower stress fracture, is a major cause for concern -- 7-footers and back problems don't mix. Most pre-draft reports suggest that Embiid is 100 percent healthy, but that isn't the real issue. It doesn't matter if he's healthy in the short-term, the question is whether he can stay healthy enough to sustain an NBA career. If a team doctor reports that Embiid won't have any long-term back issues, then Embiid will leapfrog Wiggins and Parker to the No. 1 spot atop the big board.