How Serge Ibaka's defense has tipped the series to the Thunder

Oklahoma City's blowout victory in Game 4 was all about interior defense. By putting a sliver of doubt in San Antonio's mind at the rim, the Thunder have roared back in the Western Conference finals.

Share All sharing options for: How Serge Ibaka's defense has tipped the series to the Thunder

Forget Russell Westbrook. Forget Kevin Durant. Forget the boisterous crowd that whips into a frenzy even when the home team is down double-digits. Forget the endless length that patrols the perimeter. This is what really makes the Oklahoma City Thunder scary.

You know what happened between Game 2 and Game 3, of course. With Serge Ibaka back, the basket area was suddenly shut off. His mere presence petrifies the Spurs, particularly when that fear gets justified by yet another swat in your face. It turns San Antonio's rhythmic offense off kilter because suddenly the Spurs cannot have any control over the most valuable real estate on the court.

And when their offense is off kilter, everything suffers. Tony Parker and Manu Ginobili can't drive, forcing San Antonio to hoist perimeter shots. Blocks, turnovers and long rebounds lead to transition buckets -- "turnovers for touchdowns," as the Spurs put it. This is how Westbrook and Durant score points in bunches.

This is what gets the Thunder rolling. Everything starts with rim protection, and in Ibaka, fast-developing rookie Steven Adams and, yes, even Kendrick Perkins, the Thunder have more than any team in the league. The Thunder's rim protection causes even the vaunted Spurs offense to play stupid.

How does it happen? It's a multi-step process.

This seems elementary, but it's significant that both Games 3 and 4 featured devastating Ibaka blocked shots within the first few minutes of the game. In Game 3, Tiago Splitter and Tim Duncan took it right at Ibaka in the first four minutes, hoping to challenge his injured calf. This is what resulted.

In Game 4, the Spurs zipped to a fast start ... until Splitter threw up this weak junk in the game's third minute.

There's a psychological effect when you generate easy looks, only to see your opponent throw it back in your face. Nobody, not even the game's most selfless and even-keeled players, wants that to happen again. That leads to Step 2 ...

Layups get passed up

Like all human beings, Spurs players don't want to be embarrassed again. Or, if you prefer a more selfless explanation, they believe that they have more of a chance of driving at Ibaka, Adams or Perkins and passing to someone else than challenging Ibaka himself. The problem: even having that mindset means the Thunder have already won. Their length and speed goes to another level when their opponent is tentative.

There were countless examples of the Spurs getting to the basket, then defaulting to passes on the perimeter and/or to cutters that weren't nearly as open as they thought. Splitter and Boris Diaw, who can be reluctant finishers even under normal circumstances, were the biggest culprits. 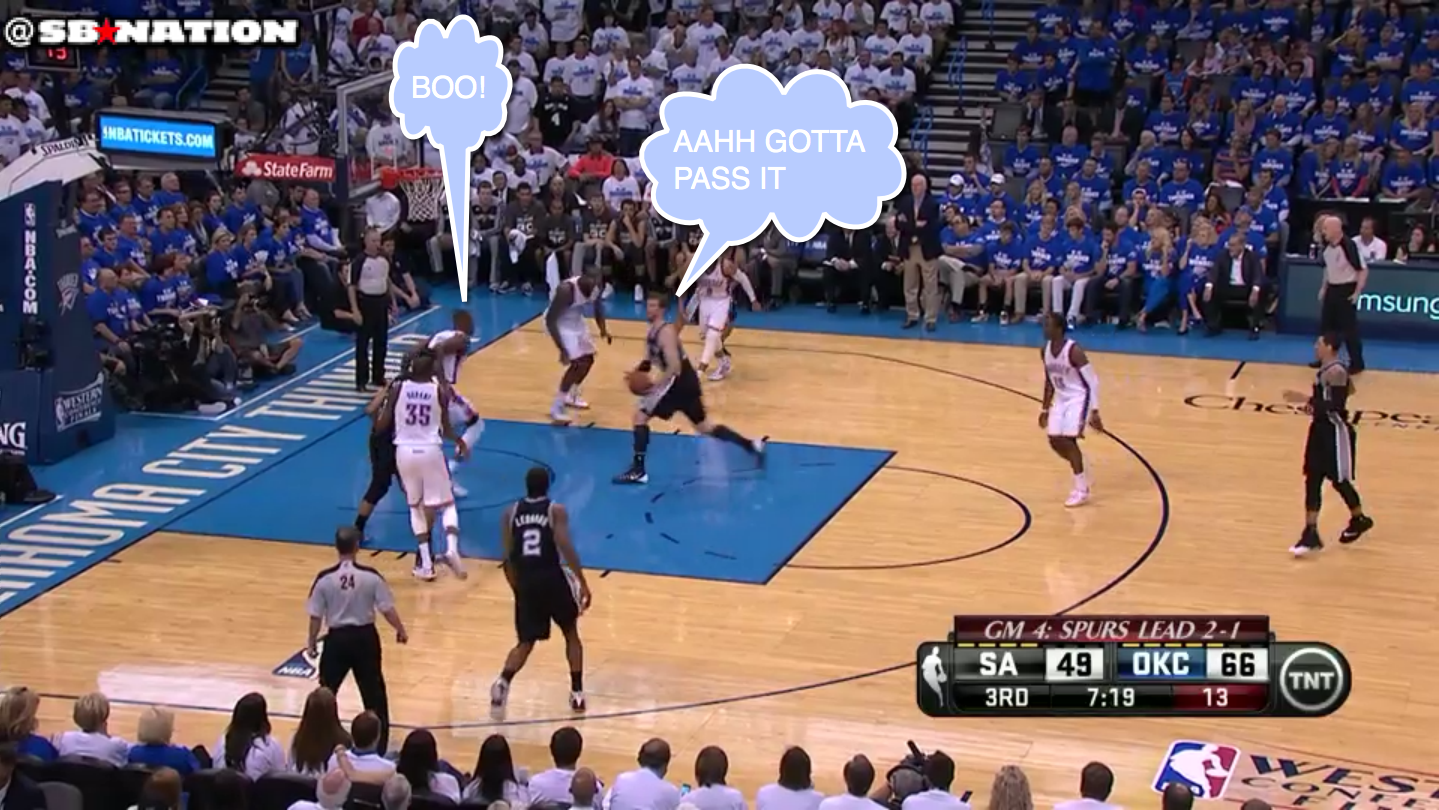 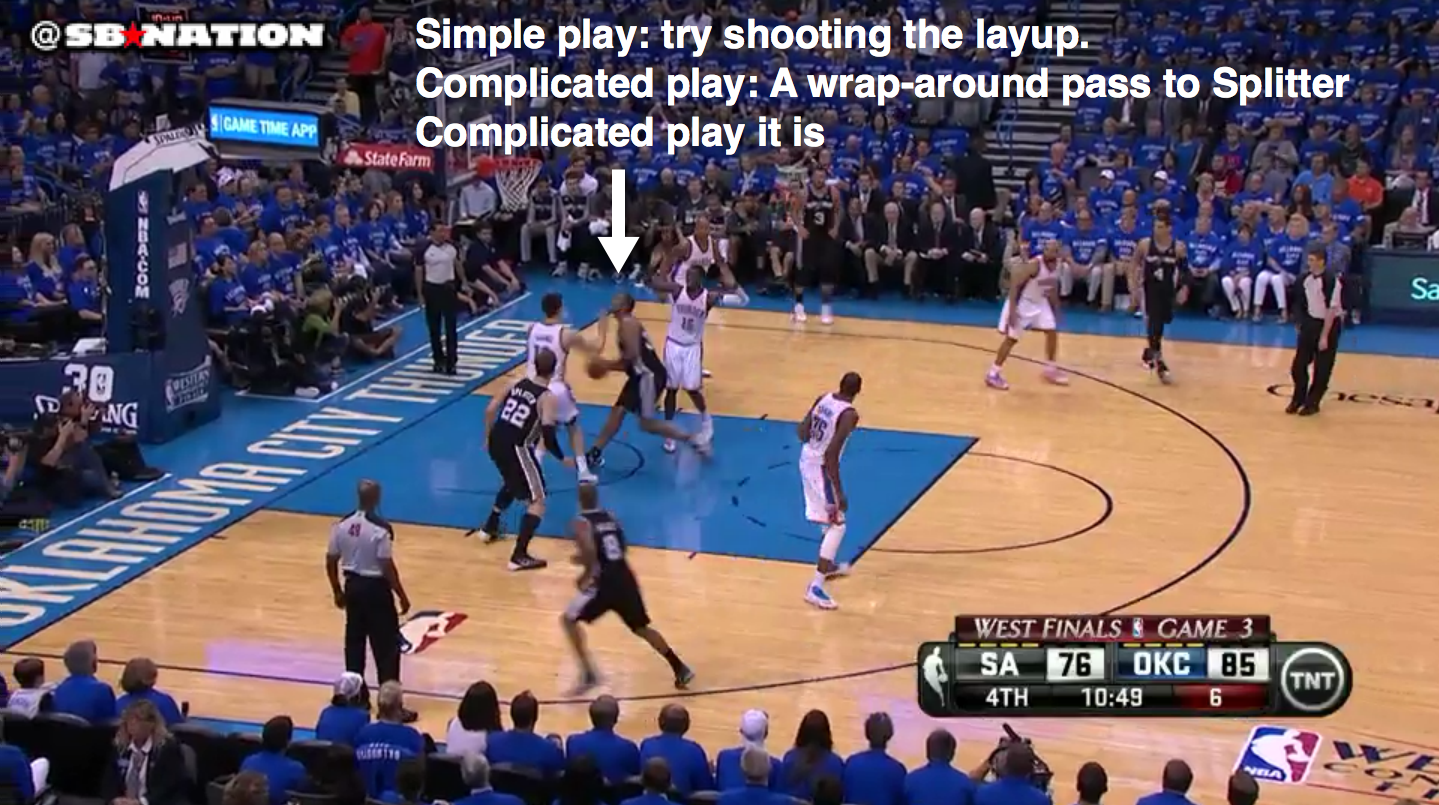 But they weren't the only ones. Kawhi Leonard, for example, settled for a difficult floater here instead of challenging Ibaka and Perkins. 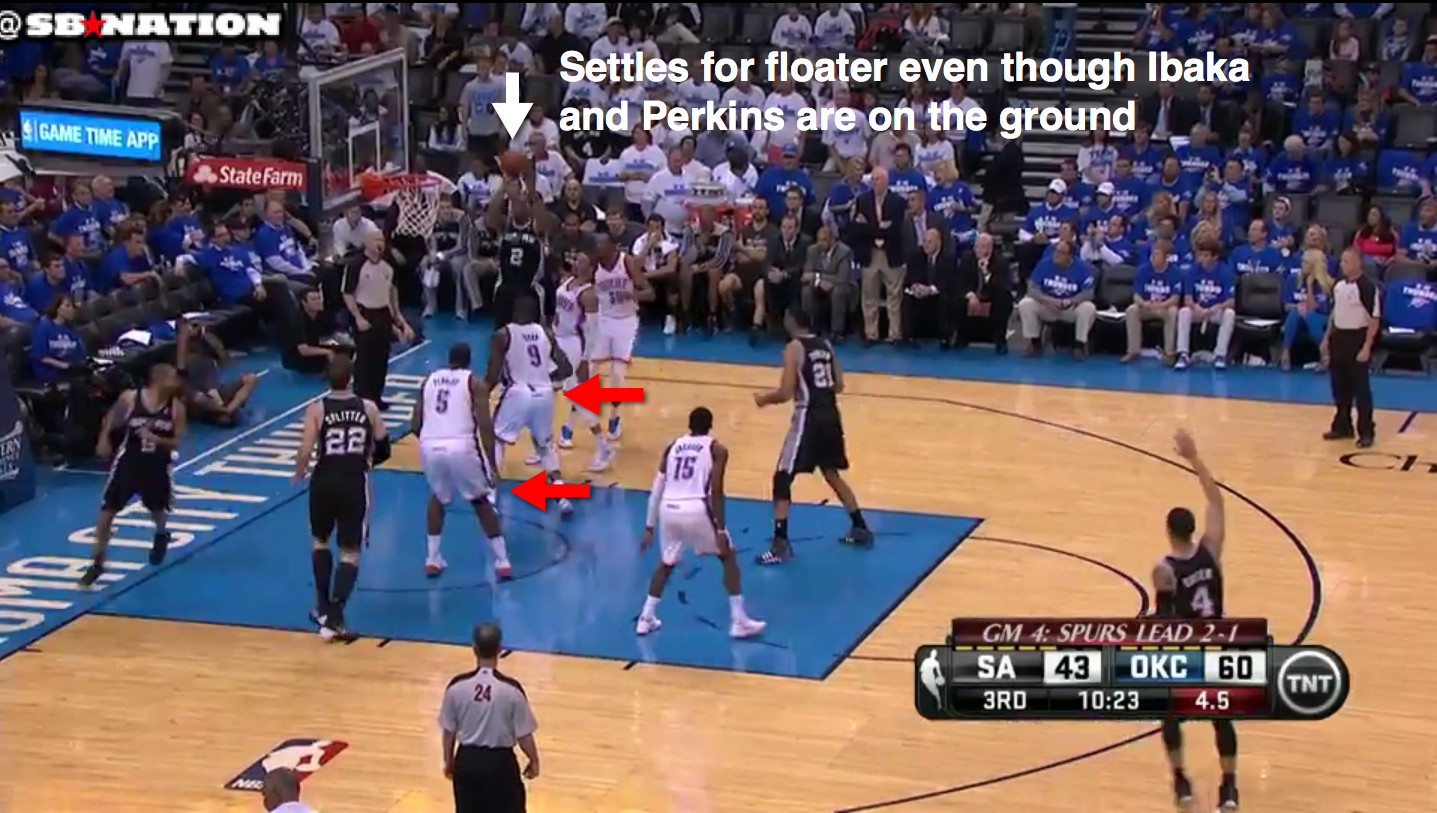 And we need to talk about this play involving a Tony Parker drive. Notice how quickly Parker moves the ball to the corner instead of going up against Ibaka.

This is the Thunder dilemma in a nutshell. Ibaka can protect the rim all by himself, as Parker has already witnessed firsthand. Therefore, Parker doesn't even bother to challenge him because he knows what will happen. He makes what would normally be a great pass to a corner shooter ... except the Thunder also know Ibaka is a one-man basket guard and thus don't need Reggie Jackson to pinch down to help him. That allows Jackson to be in position to stay with Danny Green and prevent the open look.

Was Parker scared or making a smart decision? Against the Thunder, it doesn't really matter. The result is the same.

Out of control drives

Once they realize they can't let Ibaka and Adams intimidate them, the Spurs usually regain their aggression. The problem is that there's still a small piece of their brain freaked out about the possibility that their shot will be blocked, so these drives are weak and undisciplined. Naturally, weak and undisciplined drives are stuffed more frequently, perpetuating the cycle.

Even when the intentions are good, the result isn't. Take this Duncan hook shot. The Spurs' star made a strong move and attacked the basket, but instead of powering through Ibaka, he tried a wild hook over him. Ibaka's length allowed him to contest the shot properly and force a miss. Duncan should know that the best way to score on a shot blocker is to drive right into his body.

Splitter fails here because of a similar reason. He tried sweeping a hook away from Ibaka instead of going through him. That's not how you get a foul call.

Trying to be tricky around the rim often fails too. Here, Diaw passed up the lefty layup because he's worried about Adams blocking it ... 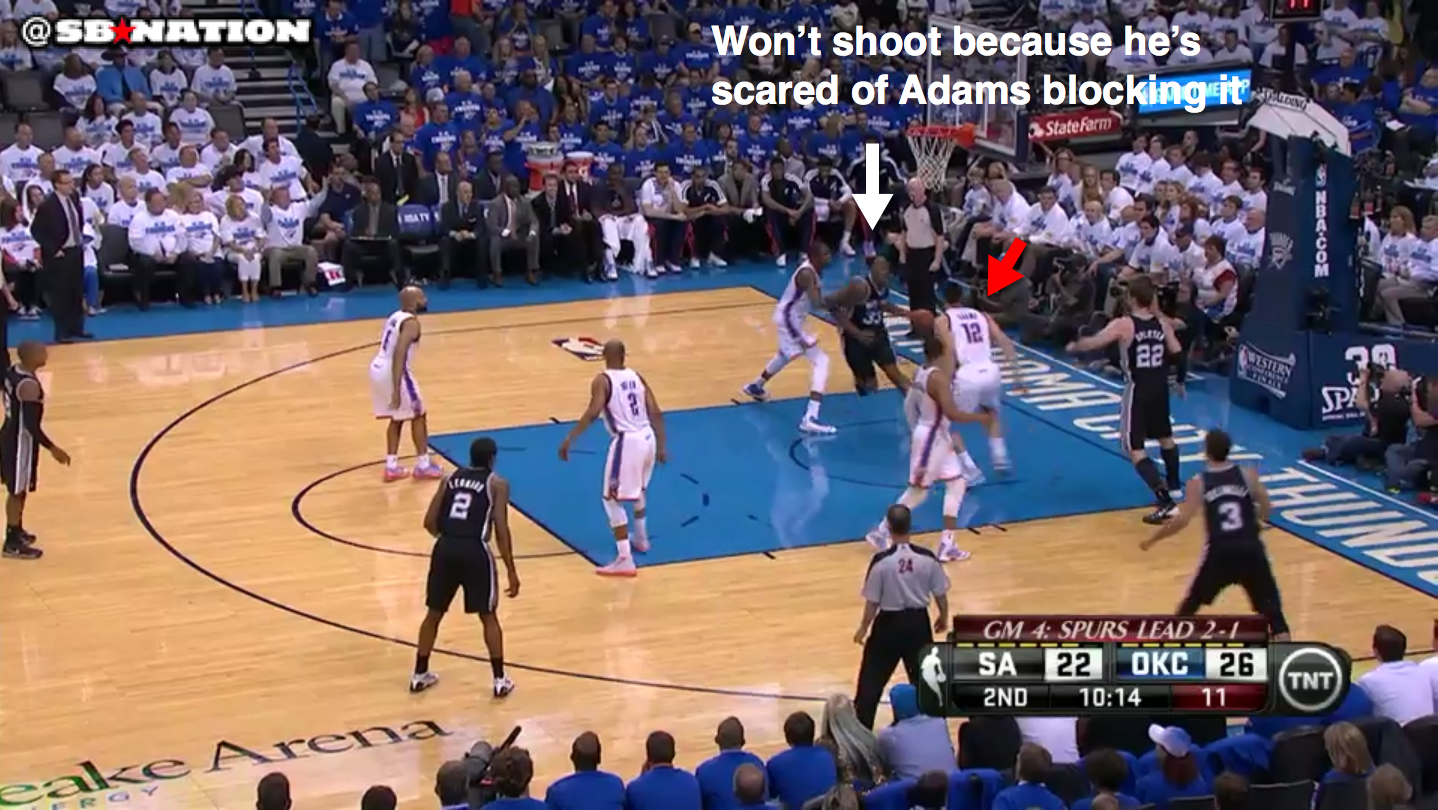 ... only to have his shot blocked anyway. 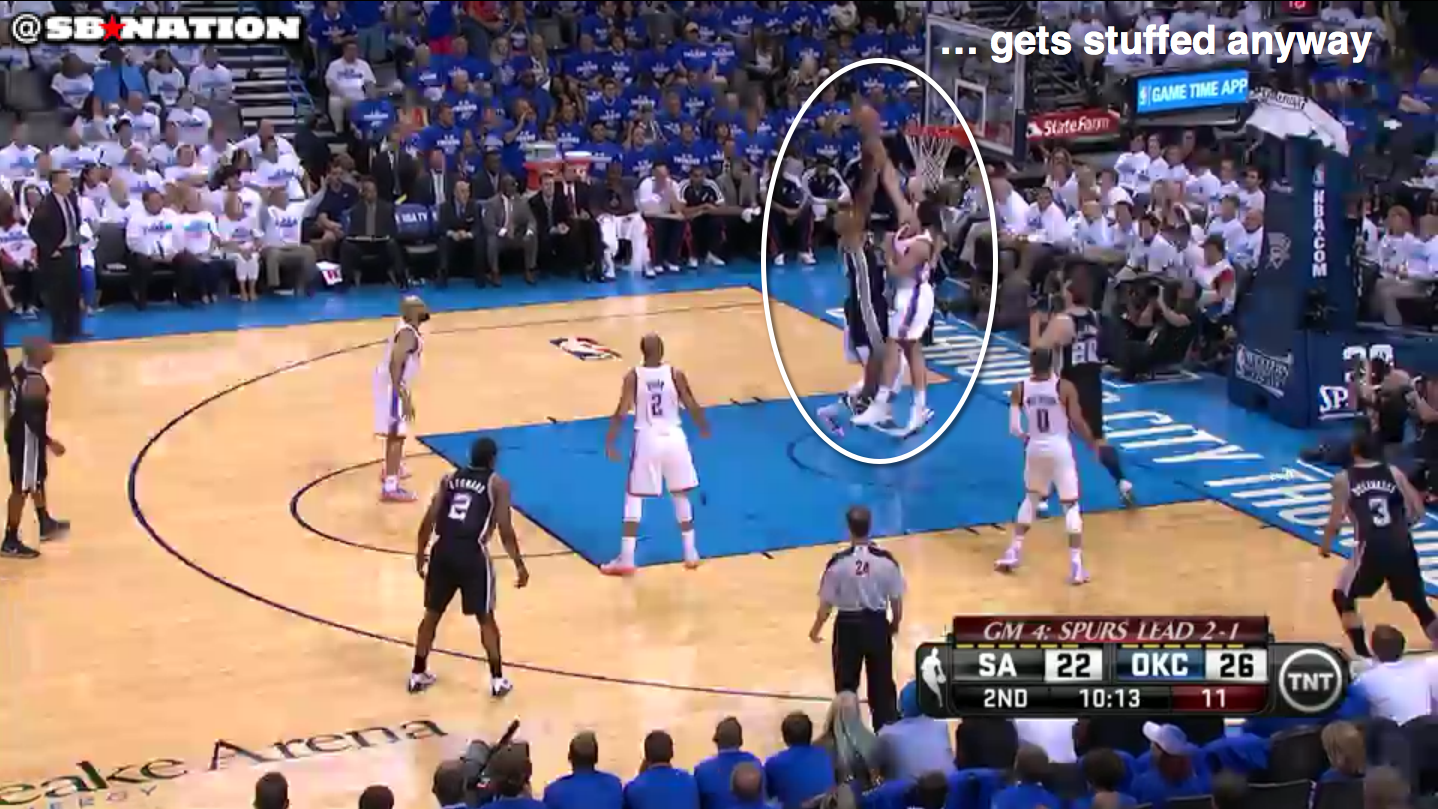 In all three cases, the Spurs' intentions were sound. Rather than letting Ibaka and Adams win the rim, they made attempts to take it back. But their own insecurity caused poor angles that only heightened the Thunder's advantage.

As it keeps getting worse, the usually brilliant Spurs decision-making goes haywire. This is what Gregg Popovich suggested in his postgame press conference after Game 4:

"All of a sudden, we were going to see if Serge could block a shot or something. I thought about passing a picture out on the bench to see if they knew who Serge was. Unwise basketball, all of a sudden. Instead of hitting open people that were out there, we started attacking the rim unwisely, and that turns into blocked shots and turnovers."

I worry Popovich is addressing the symptom rather than the problem, but he isn't wrong. Look at this Leonard drive, for example. He took a wild floater instead of making the simple kick-out pass to Diaw. 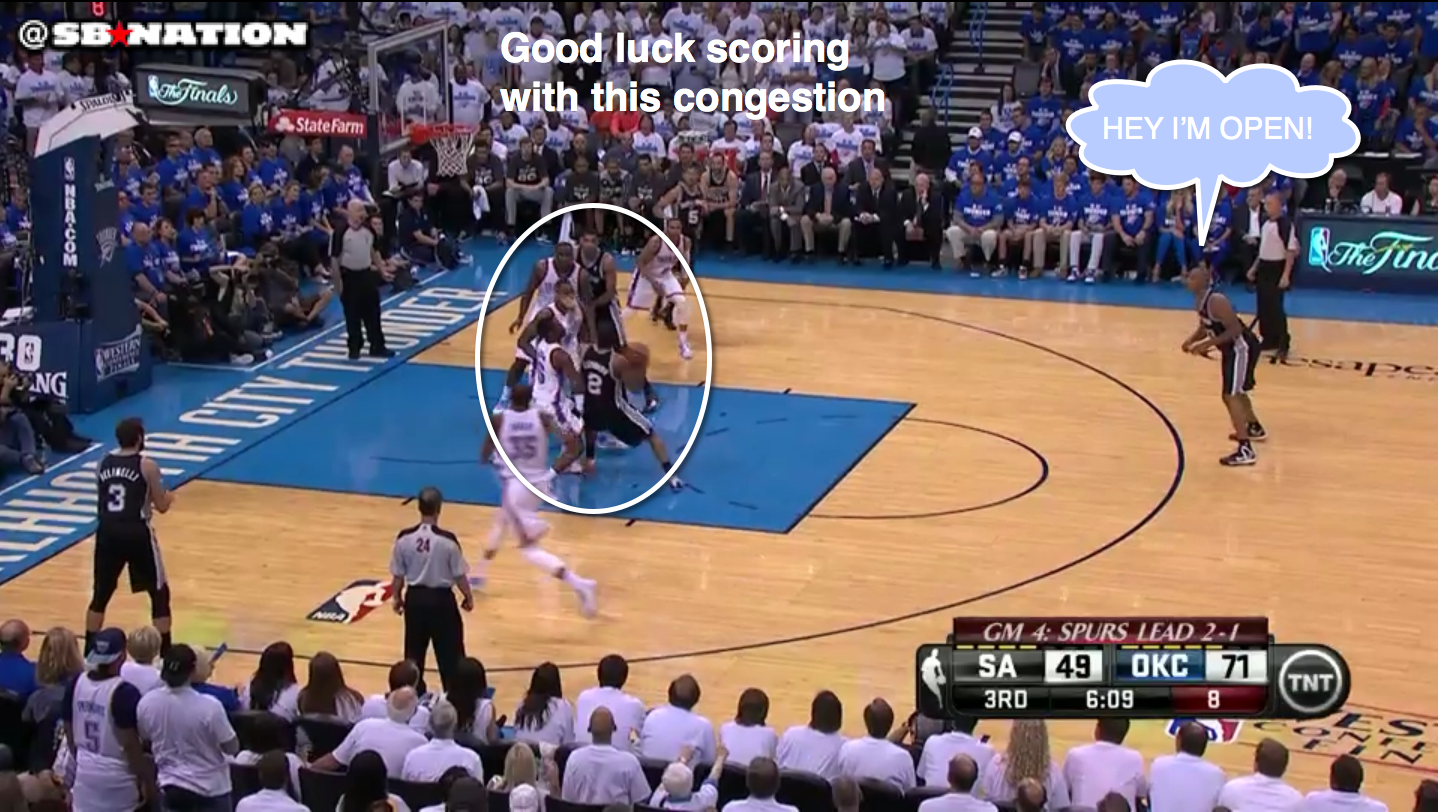 Or this play, when Parker tried to attack Adams instead of being more patient and waiting for the passing lane to open up on Duncan's roll to the basket. 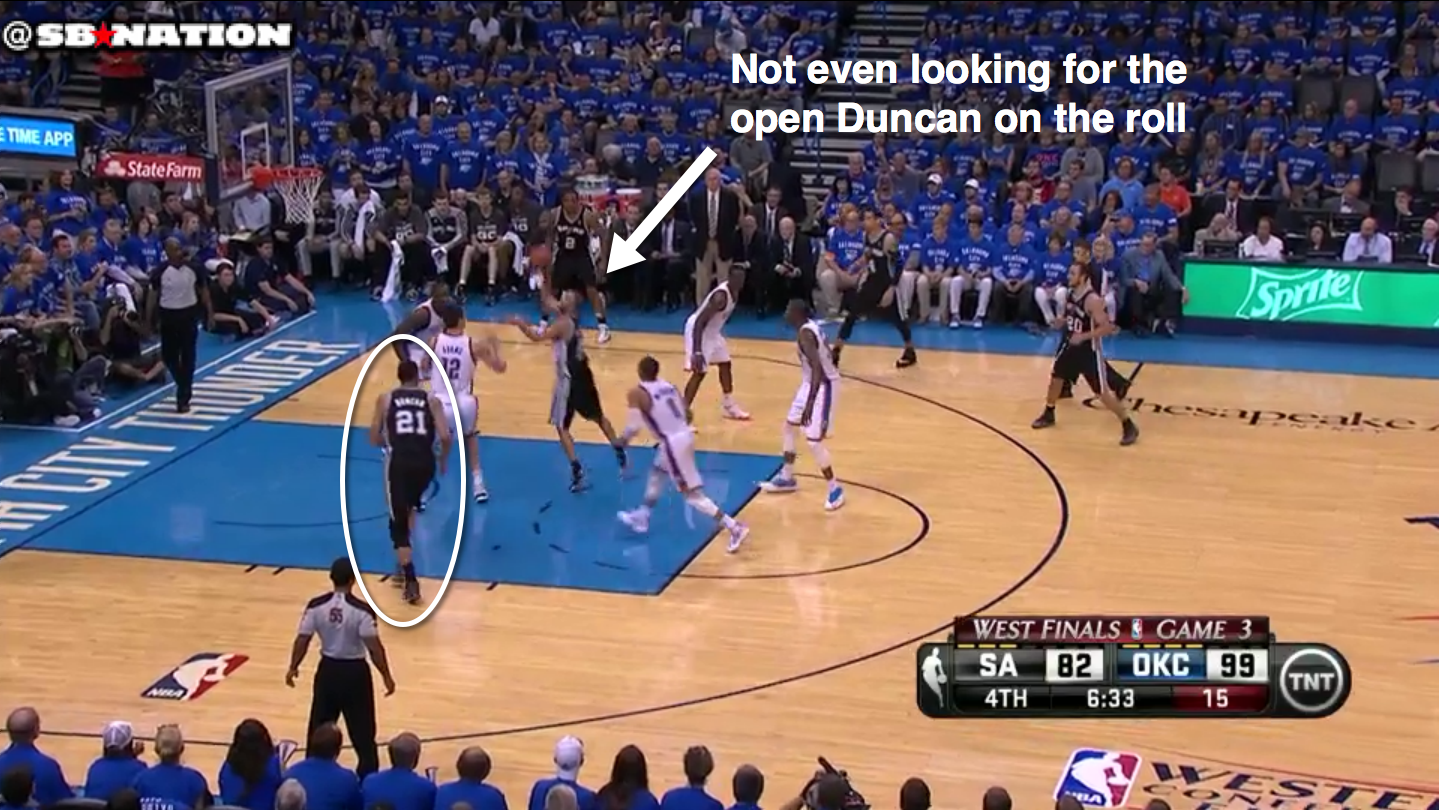 Or this impatient Duncan floater, an out-of-character shot considering he had a 3-on-2 situation he normally diagnoses extremely well. 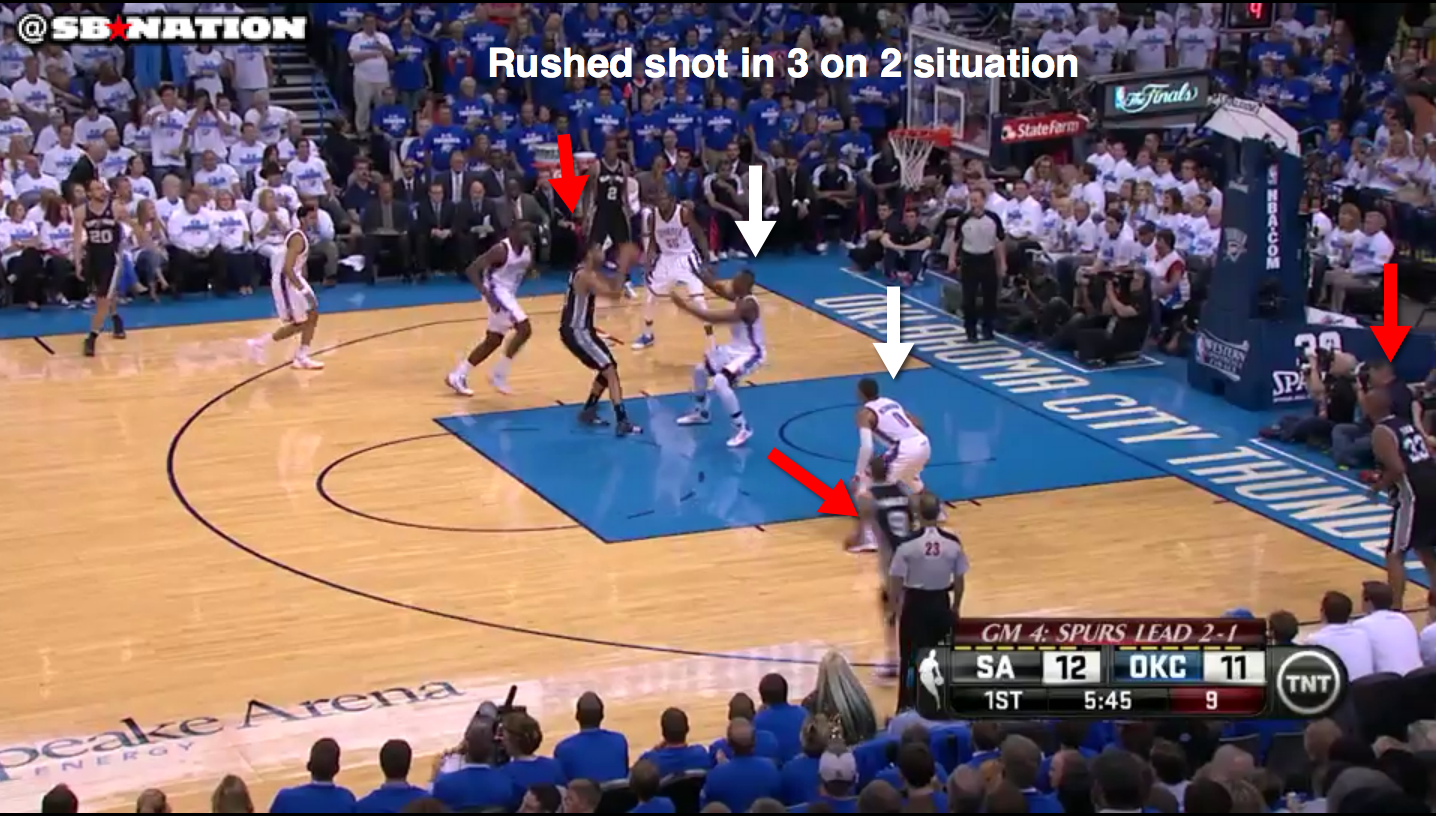 Those are poor decisions that came from frustration. It's like anyone who tries hard at something and fails repeatedly. It's easy to stay stubborn and try to do it your way until it works. It's much harder to accept failure and look for another method.

That's a tough one, because neither Splitter nor Diaw have been effective. Normally when the Spurs need offense, they can count on Diaw to open up the floor. But that hasn't been the case in this series because the Thunder are freely leaving him open to add extra rim protection. Observe: 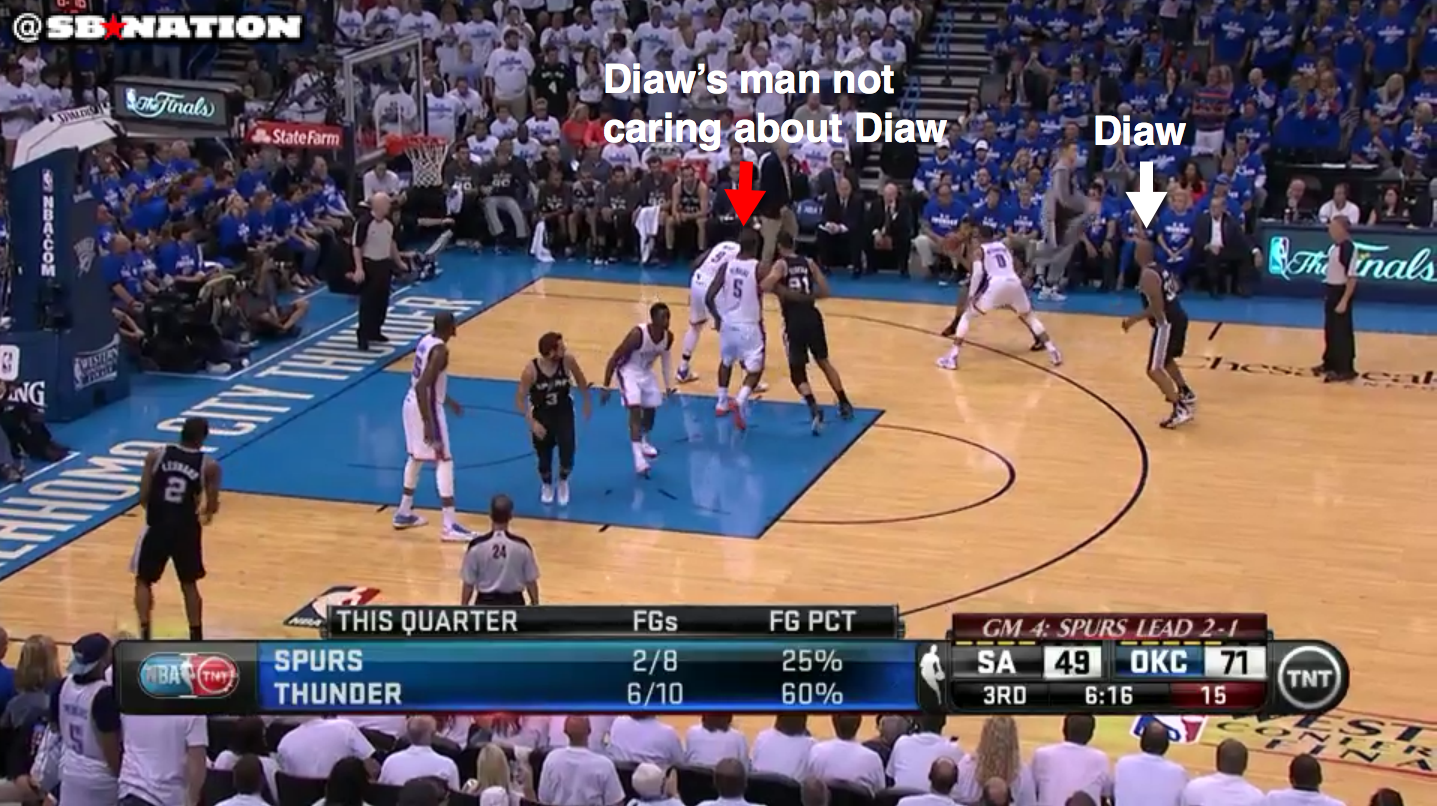 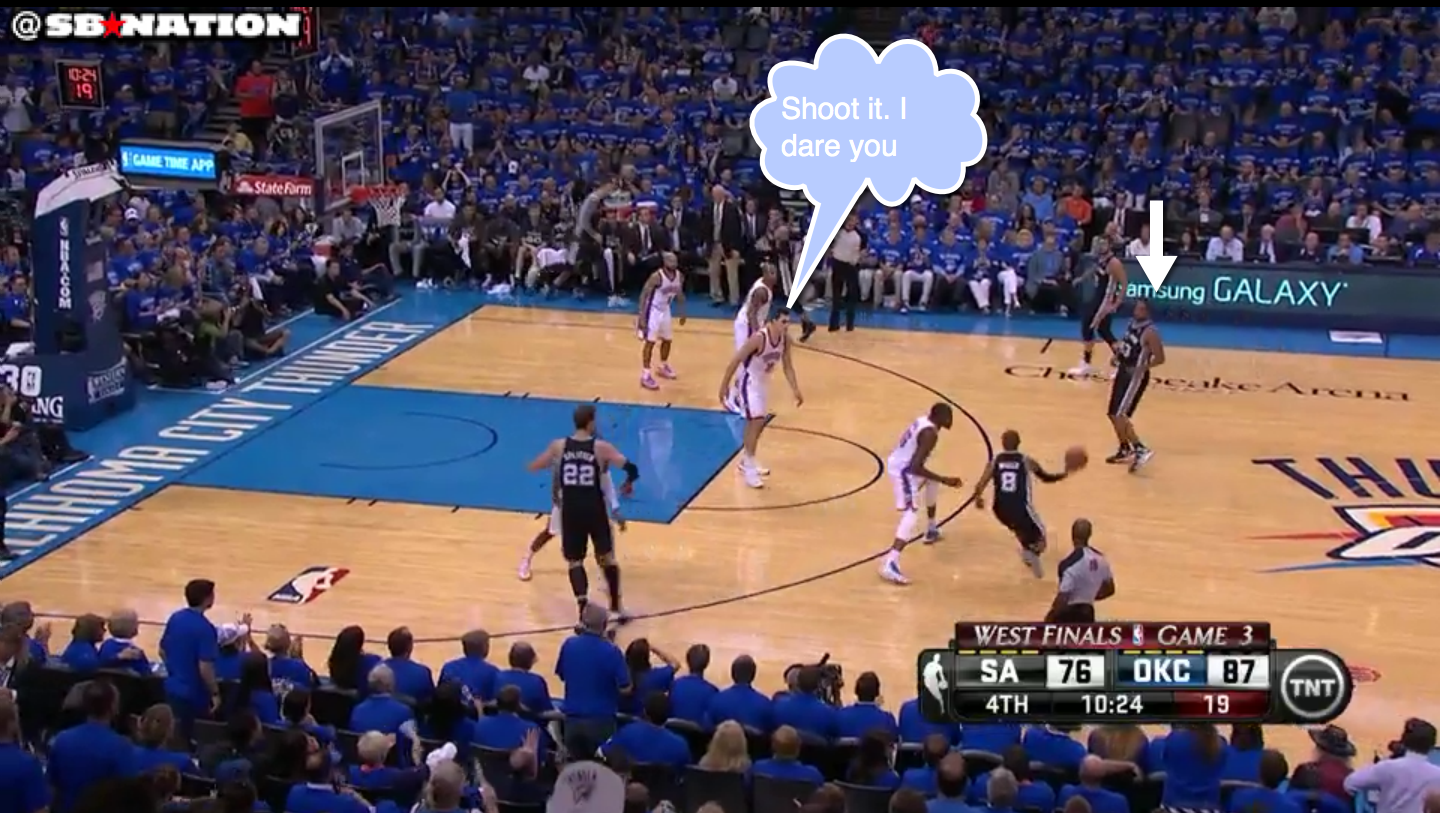 They know Diaw is a reluctant shooter and don't believe he can hit enough perimeter shots to make them pay. So far, he hasn't. Splitter, who is even less of an offensive threat from the perimeter, isn't helping either.

That's why it might be worth trying something more drastic: a super-small lineup with Leonard at power forward. There's a scary trade-off, because it will leave someone other than Leonard on Kevin Durant, but it could also force Ibaka, Adams or Perkins away from the basket, leading to better shot attempts. More buckets means more opportunities to set your defense and fewer transition run-outs.

It's just a thought, though. The less drastic adjustments -- playing harder, staying disciplined, hitting more perimeter shots, attacking from different angles -- could prove to be enough.

Regardless, it's not an accident that the Spurs look so un-Spurs-like when they play the Thunder. Once the basket area is no longer safe, the rest of the court follows. San Antonio has to find a way to negate Oklahoma City's rim protection if it wants to advance, and there are no easy ways to do that.