A month ago, Adam Silver faced a huge test. He's aced it.

When the Donald Sterling scandal broke in April, it seemed massively unfair to rookie NBA commissioner Adam Silver. He was dealt one of the most explosive ownership scandals in league history just three months into his tenure. The scandal captured the public interest due to salacious details and the inherent wrongness of Sterling's comments. Players -- including those on Sterling's own Clippers team -- took major offense and mobilized quickly behind stand-in leader Kevin Johnson. Boycotts were openly discussed and, we'd find out later, planned.

Silver had to act decisively and quickly to keep his players on board ... and he did. And he deserves all credit for that.

Few really expected Silver to ban Sterling for life from NBA activities or to push to strip him of his team. It seemed like the basketball world was prepared to be disappointed by Silver's punishment. Sponsors abandoned the Clippers. There was growing pressure on NBA partners. We expected a $1 million fine and a postseason ban. Silver went much harder, showing palpable anger in the press conference that satisfied the players. He won that battle. He won over the players, sponsors and the fans. 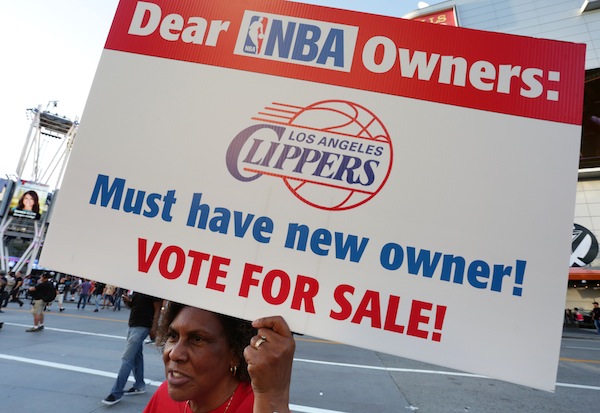 The next battle -- getting Sterling to actually sell -- appeared much more difficult, and it still may be. (As the adage goes: where there's a Sterling, there's a way to make things horrible.) Silver set about a path outlined in the NBA bylaws and franchise agreements in which NBA owners would vote to strip a fellow governor of his team. This would require a 3/4ths vote, and that balloting was scheduled for June 3. Several owners have publicly embraced the plan, but there was still chance for dissension on grounds that this set a dangerous precedent. Mark Cuban, for one, has made comments about fearing a slippery slope.

But as of now, it appears the Sterlings will sell the Clippers to former Microsoft CEO Steve Ballmer for $2 billion. The last-minute agreement, assuming it goes through without any more hitches, means that Silver doesn't even have to ask his other 29 NBA owners to vote to strip Sterling of the club. He can avoid that whole hurdle. You know that makes guys like Cuban happy: they don't have to risk voting for Donald Sterling, and they don't have to set any precedent.

Plus, ahem, $2 billion. Any other owner thinking about offloading his team just got a massive infusion of value. Also, Sterling had massively underleveraged the Clippers; Ballmer's arrival, assuming it happens, will infuse all sorts of new revenue into the league in the nation's second-largest market. Owners should be very happy with this result. If this goes through, Silver will have won over the owners.

In April, this looked like a long-term disaster. If this sale to Ballmer happens -- if Sterling doesn't Sterling it up -- the saga will instead mark a huge blinking victory for Silver within his first year on the job and will set up a long tenure of success.

Until the next crisis, at least.