Share All sharing options for: There is no safe job for an NBA head coach

You can tell who doesn't pay much attention to the NBA by their stunned reactions to Mark Jackson's firing on Tuesday (this is not a criticism of those people -- being a casual fan of anything is just fine). Not only did Jackson famously clash with his front office and, more importantly, his team's owner, but there are no safe jobs for NBA head coaches. None.

One current NBA head coach got hired by his team before 2008. That's Gregg Popovich, who has led the Spurs to four titles and a long string of 50-win seasons. Only three other coaches, Erik Spoelstra, Rick Carlisle and Scott Brooks, have been in place since before 2010. And this chart should tell you everything you need to know about the rest of the league. 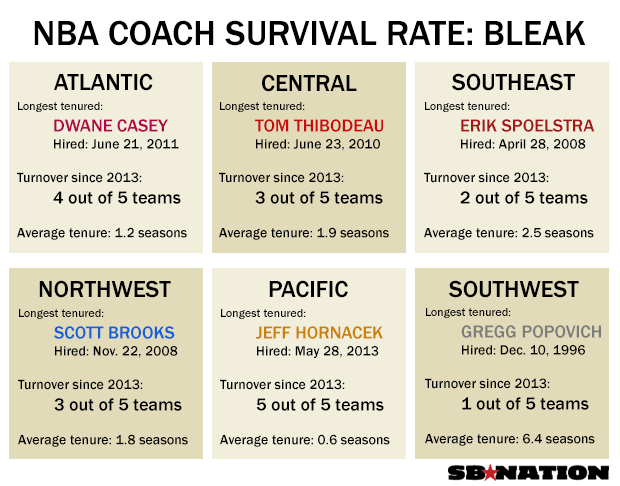 Eighteen jobs have turned over since the end of the 2012-13 season. That's more than half the league! One of those teams, the Detroit Pistons, has already fired the head coach they hired in the 2013 offseason, which gives us 19 head coach openings over two years. This exercise assumes John Loyer is not retained by Detroit; if he is, the average current tenure length bumps up to 2.41 thanks to his half-season.

A daily column on the NBA.5/5: Which playoff loser is ready for success
5/1: D'Antoni leaves the Lakers on his terms
4/25: The Thunder's uncertain future
4/23: How the Wizards escaped ineptitude
4/21: Don't forget about the Spurs' defense
4/18: 23 things to watch in the playoffs

This exercise also doesn't take into account moves that could still be made. It would appear that Kevin McHale is safe. One assumes that Randy Wittman has saved his job, and that Terry Stotts will be back. Scott Brooks is a minor question mark depending on how the Thunder shake out. Frank Vogel is probably a bigger question mark. Brooks is only one of two head coaches in the Northwest Division with multiple seasons under his belt (Stotts has two). Vogel has 3-1/2 years under his belt in Indiana.

If Brooks and Vogel are dismissed, the NBA will lose the coaches with the fourth- and sixth-longest tenures, respectively. The average current tenure would drop to 2.1 seasons.

The most amazing finding in the chart is that Jeff Hornacek is the longest-tenured coach in the Pacific Division. He was hired 11 months and 10 days ago. Michael Malone was hired two days later, and Doc Rivers joined the Clippers a couple of weeks later. Going into next season, the five Pacific coaches will have a combined three seasons of experience with their current teams. That's straight-up lunacy.

Is the quick hook in the NBA a bad or good thing? It's apparent that it can be destructive: what teams with high turnover tend to do is create a constant churn every couple of years. That lack of stability wears on players and creates a culture of uncertainty. In addition, learning new systems takes time and mental energy that might be better used sharpening up fundamentals.

On the other hand, if you hire a coach and realize he's a bad fit within 2-3 years, you can't hang on just for the sake of stability. The sunken cost fallacy comes into play here. Just because you've spent a year under a coach and guaranteed him three years of salary doesn't mean it would automatically be the wrong decision to can him. Each case must be evaluated individually.

Remember: the Nuggets fired the Coach of the Year last season. The NBA has a culture of swapping out head coaches early and often. No dismissal should ever be a surprise. Keep that in mind when rumors of coaches getting axed percolate.