Mark Jackson on firing: 'There are no more unnamed sources that can affect me'

The former Golden State Warriors coach went on a number of radio shows to discuss his frustrations about his firing.

Share All sharing options for: Mark Jackson on firing: 'There are no more unnamed sources that can affect me'

Former Golden State Warriors coach Mark Jackson went on a radio tour Wednesday in response to being fired. While he tried to hold back, his answers, particularly regarding the use of unnamed sources, were very critical of the organization.

"I wake up absolutely relieved, because there are no more unnamed sources that can affect me," Jackson said in an interview on 95.7 The Game. 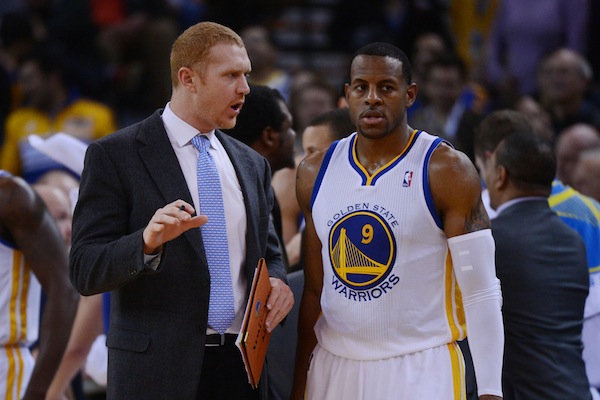 "The unfortunate thing is I go in an office with an owner and a general manager, just us three. And while I'm in that office, it's tweeted out that I'm in a meeting and I'm about to be fired. That's not how you conduct business, and if that's how business relations are supposed to be done, then they're 100 percent right, I did not conduct business the right way, if that's the right way."

Jackson was also critical of former assistants Brian Scalabrine and Darren Erman, both of whom were fired or reassigned. Scalabrine was sent to the Warriors' D-League affiliate, while Erman was let go for secretly recording conversations between other coaches.

Mark Jackson to Sirius XM on Brian Scalabrine, Darren Erman: "The only fault I got is hiring those guys."

Jackson also discussed his relationship with the front office, and the role his view of business, his faith and his refusal to move his family to the Bay Area could have played in his firing. Here's a summary of his remarks:

On his ability to deal with the business side:

On being a pastor and not relocating to San Francisco possibly playing a role in his firing:

"It may have for them, all of a sudden. It did not play a role from day one. The job description was clear; I fulfilled that. I would make the case that if I lived in the Bay Area, that I would be at the office, no question, less than I was as the head coach. And at the end of the day, here's the facts — I live here, so what do you want? I'm in the bay every day. So the deception is that I don't live here. My wife and kids are in LA, my daughter goes to the University of San Francisco, but I'm here."

"And I would tell you that, on a regular day, I'm one of the first ones in the office, and I'm certainly, with some guys on my staff and my video guys, one of the last ones to leave ... That wouldn't be the case if I lived there. I'd be home playing with my kids and hugging my wife, loving on my family. So if you want to look for an excuse, you can find an excuse."

On the team moving forward:

"It will be entertaining to see what their next step is, because 51 [wins] is not enough, and having a real chance is not enough. Now they've gotta do it."

On unnamed sources and leaks:

"I believe that for both sides, it was a tough, draining year. Too many sources. I go into a meeting to discuss the job opportunity, and before I come out, it's been tweeted, and I'm in the meeting. And then I'm being fired. That's not how you do business, and you're worrying about business relations?" 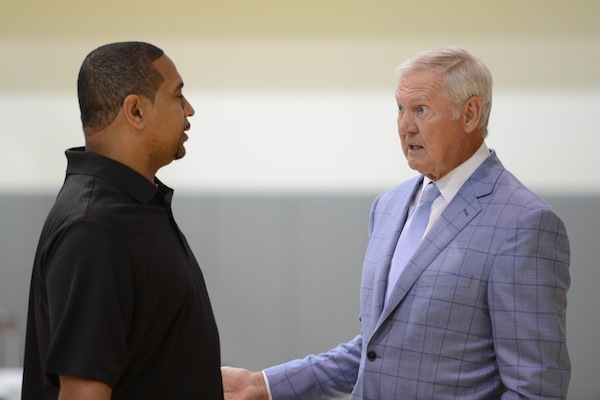 "You did know a lot, but you also heard a lot of lies. Jerry West wasn't banned from practice ... There certainly was a lot of stuff that was told and lied about and leaked, and some of it wound up ultimately being true, as far as my job being at risk, and friction, and people believing that I didn't have relationships and all of that. The problem is, everybody wants the glory, and I guess I'm a different guy, because to me everything was credit to the organization, credit to management, credit to my players, credit to fans. When you're looking for a finger to be pointed at you, sometimes it's frustrating when other folks get credit."

On whether he would still have a job if Golden State advanced or if he would have resigned:

"If we advance, do I still have a job? I'm not really sure, because at the end of the day, we both walked into the meeting and we both were frustrated. That's what the crazy thing is, nothing was leaked on my side, because I felt the same way and I had issues. My mind was made up, what I was going on, my fate. So it wasn't a one-way decision."

On the issues with assistants Brian Scalabrine and Darren Erman:

What happened with my two assistants was created in a place where you want transparency. You want everybody to talk to everybody. What happens is in this business, assistants are people that all of a sudden see, 'Well, if I say we should've did this, or I say we should've did that, all of a sudden, I might move up the charts.' So you create an environment where ... just give a little bit of gray area and who knows? And that's not fair to anybody. And it's unfortunate. And there's a reason that what happened with my two guys happened. That's just a fact.

On his faith playing a role in his firing: