Smart can sometimes do it all. He also sometimes can't do anything. Can the Oklahoma State star become more consistent on the next level?

Marcus Smart's sophomore season at Oklahoma State was a roller coaster ride. He blew the gates off Memphis in their first matchup, scoring 39 points and showing off his range, netting five shots from behind the arc.

Then, near the end of January, he hit a slump. He scored just four points against West Virginia and cameras caught him stomping a chair on the sidelines. Then, he shot just 21-of-58 (36.2 percent) over the next four games, all of which his Cowboys lost. In a game at Texas Tech, he shoved a fan in the stands and was suspended for the next three games.

After that, though, he bounced back again. Over the final eight games, Smart averaged 19.3 points, 6.2 assists, 6.6 rebounds and 4.5 steals.

That's the type of stat stuffing that Smart can provide. He's a bull with the ball in his hands and he's relentless in attacking the basket. He's a strong finisher at the rim (64.9 percent, per Hoop-Math, much higher than Tyler Ennis' 54.9 percent) and has good enough vision to either find shooters on the perimeter or dump the ball off when the help defense over-commits.

Smart isn't the quickest guard laterally, but he has great instincts off the ball. Oklahoma State coach Travis Ford allowed Smart to roam off his man to generate steals, and that exactly what Smart did. He averaged 2.9 swipes per game, the most of anyone in DraftExpress' Top 100.

Smart's super aggressive style produced eye-popping numbers across the stat sheet, but it also plagued him on both sides of the ball. He fouled 2.9 times per game, the most of any guard in DraftExpress' top 100 and seventh-most in the database, and he turned the ball over 2.7 times per game. He also took a lot of bad shots; he attempts 5.3 three-pointers per game despite shooting under 30 percent from the arc.

Smart scored more points in other games, but I loved the poise and control he showed in this one. He had his handprints all over Oklahoma State's offense, serving as a lead guard and the point of attack in their press defense.

Texas Tech played pretty far off him on the ball: 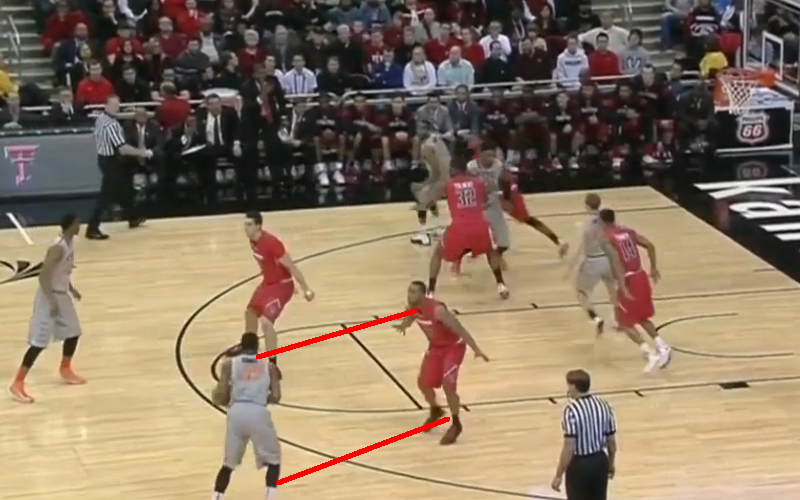 But Smart didn't jack up a bunch of three-pointers. He only shot two, one of which was wide open.

He's a much craftier passer than many realize, especially when he's in control. I counted three passes he made in the first half that could have easily been assists. On the first, he found an open teammate in the corner after he drove to the basket. The second was an alley-oop to hype man Markel Brown, a play in which Brown usually finishes. The third was a pocket pass he drilled off the pick-and-roll.

Oklahoma State played small all year, usually running with four guards at a time. Smart had the ball in his hands a lot, but he was also forced to play off the ball. On this play, he was the off guard and Oklahoma State sent him around a pin-down screen. When he caught the ball, Texas Tech tried to trap, but he stayed poised and looked off the help defender. 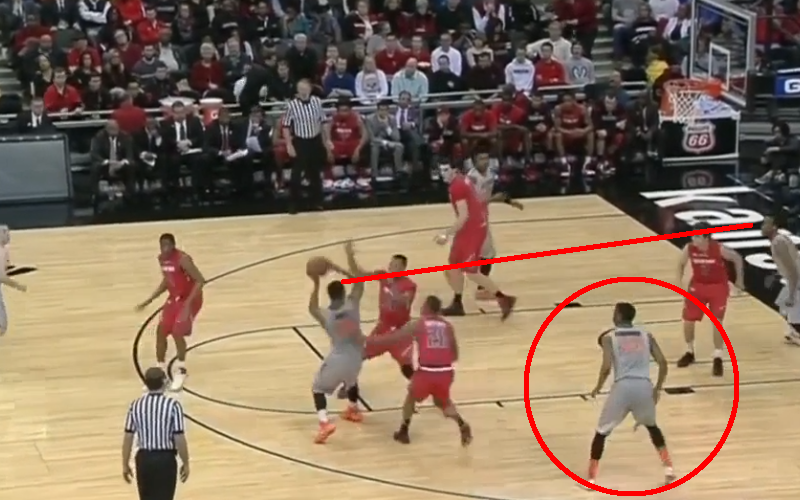 There was no chance he was going to actually zip that ball to the baseline. He was trying to fool the defenders to keep Michael Cobbins open on the roll. 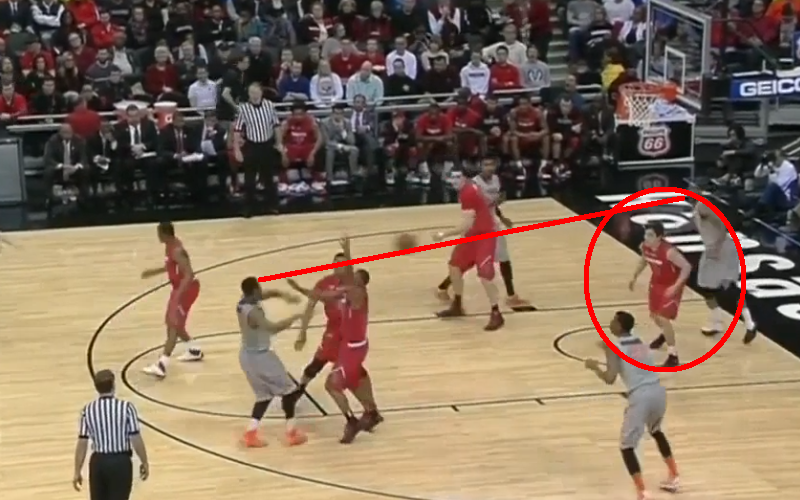 Smart barely even looked at Cobbins, yet he threw a perfect pass and Cobbins drained the mid-range jumper.

On defense, Smart terrorized Texas Tech's guard. He knew where they were throwing the ball even before they did. Watch how he jumped these passes, then finished through contact on the break.

Smart looked like a point guard. in this game He took care of the ball and played intelligently on defense. He made life easier for his teammates and played under control. That's exactly what you want to see from your lead guard.

This performance, on the other hand, was abysmal. Smart missed his first two shots from the field -- two three-pointers from opposite corners -- and things went downhill from there.

The problem with Smart's jumper is that he brings the ball well below his waist before rising up to shoot, even slower and beyond a standard dip. It's a hitch that just leaves too much room for error. Look how far the ball moves before he flings it toward the rim: 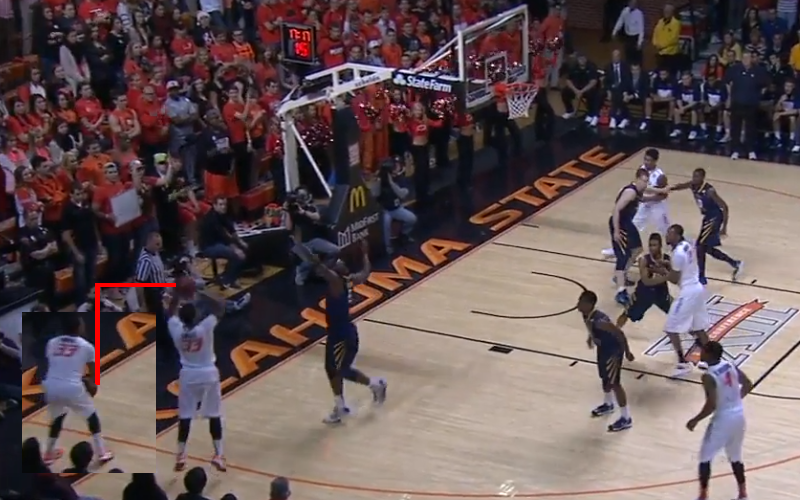 He also tends to float too far forward in the air. It hurts the balance on his jump shot and plagues his consistency. Look how low he catches this jumper: 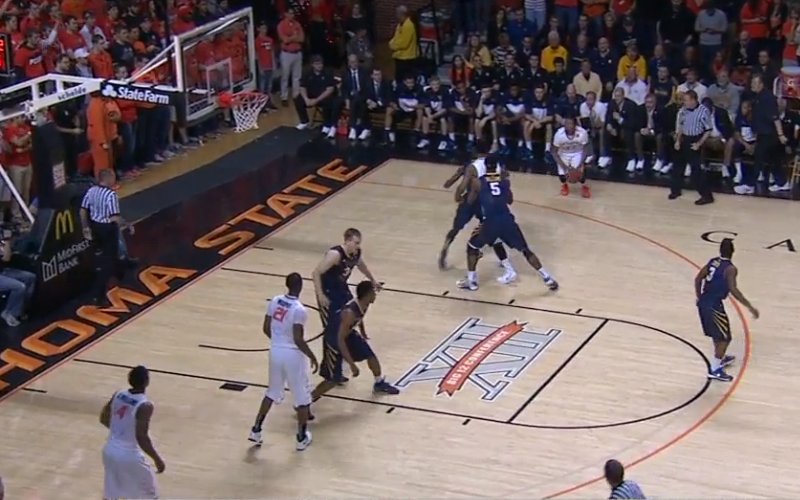 The ball is too low and he's way off balance. He jumps too far forward on this shot, landing a foot in front of the three-point line. When there's that much movement and you jump that far, it's impossible to have any consistency. Add in sometimes-sketchy shot selection and it's easy to see why Smart shot so poorly from the arc at Oklahoma State. He'll need to fix that if he wants to be a factor from the NBA line.

Smart was visibly flustered in the first half. He was called for a double foul while aggressively fighting for position in the post, then kicked a chair on the sidelines. He sat out the final six minutes of the half with two fouls. Then, three minutes into the second half, he picked up his third foul:

Why truck an opponent like that? I can appreciate aggressiveness, but it makes no sense to rumble through your opponent and not get back on defense, especially when you battled with foul trouble in the first half.

When he came back in the game, he made a nice hustle play that resulted in a Phil Forte three:

This is the type of seesaw act that a Marcus Smart game can turn into. He'll make a great play, then subtracts it by being out of control on the next possession. Against West Virginia, Smart was out of control.

Somewhere in the middle: Kansas, March 1

We got it all from Smart in this game: points, rebounds, assists, defense, over-aggressiveness and poor outside shooting. All of his strengths and weaknesses were on display.

In the first half, it was Smart's weaknesses. He missed his first seven shots from the floor and took some very poor shots that really had no chance of going in.

He was pressing and way out of control.

The second half started a little better. Smart smoothly sunk a three off a pin-down screen, then forced a charge on Andrew Wiggins. But he took two more bad three-pointers and was just 1-of-10 from the field with under 10 minutes remaining.

That's when Good Marcus Smart kicked in. He grabbed a rebound and threw a deep alley-oop to Brown. Moments later, he calmly drove into the teeth of Kansas' defense and netted a pull-up mid-range jumper. On the next possession, he stole the ball from Kansas' Perry Ellis and was fouled. A few possessions later, he rejected a screen, drove to the paint and dumped the ball off to a wide open Brian Williams. Then, he made this crazy hustle play:

On Oklahoma State's next possession, he pulled up and drilled an open transition three to give the Cowboys a 63-61 lead. Then, he finished a huge bucket through traffic with 46 seconds left. The Cowboys forced a turnover on Kansas' next possession and Smart scored through Joel Embiid in transition. It was a risky play to attack a 7-foot center in a one possession game with time running out, but it was one that anyone watching knew Smart would attempt. He made the bucket and Oklahoma State pulled off the upset.

This game encompassed Smart's unpredictability. He played poorly for 25-30 minutes, then all of the sudden turned it on and lead his team to a win.

Smart has the size (6'3, 227 pounds), length (6'9.25) and feistiness to defend either backcourt spot. His anticipation on that end is fantastic and he'll immediately be one of the strongest guards physically in the NBA. On offense, he's strong enough to get into the paint and cause havoc once he's in there.

But he has to learn how to be in control, as he was against Texas Tech. He can't afford to squander possessions by taking bad shots, and if he does, it'll be difficult to even give him minutes. He will give whatever team that drafts him an edge, but he first needs to smooth himself out.