The former Michigan State shooting guard can shoot threes and play defense, so he's exactly the kind of player NBA teams crave. But just how high is his ceiling?

Two-way basketball players are hard to find. A lot of guys can shoot. A lot of guys can play defense. The trick is recognizing the rare few who can do both. Former Michigan State shooting guard Gary Harris is an example of the two-way ideal every NBA team desires.

Harris is a well rounded scorer on the perimeter. He's very good working off the ball, where he can shoot off flair screens, curls or pin-downs. In his sophomore season, he took on a bigger role in Michigan State's offense and improved as a passer, nearly doubling his assist rate (16.8 percent), per Basketball-Reference.

He's a good, not great, ball handler and he has a nice right-to-left crossover he showed off several times his sophomore year.

Harris is a pesky and versatile defender. He has the lateral quickness to defender either guard spot and he's feisty enough to fight his way through screens. Off the ball, he will navigate through screens to stick to his opponent. On the ball, Harris stays low in a defensive stance and shuffles his feet really well. He also has very good instincts, averaging 2.2 steals per 40 minutes.

here's a good example of Gary Harris' perimeter defense. closes out, slides and cuts off the drive. https://t.co/CQp8xthVNb

But just how high is his ceiling? He's a good-not-great athlete; he struggled at times creating offense for himself and others and he's a poor finisher at the rim. Those are weaknesses that limit him from a star to a role player.

Harris faced a lot of pressure on both sides of the ball against Michigan. Michigan State was without Adreian Payne and Branden Dawson, so the load of the offense was put on Harris' shoulders. On defense, he was tasked with guarding Nik Stauskas, one of the most well-rounded offensive prospects in the draft.

Stauskas got the best of him early, scoring eight points in the first seven minutes. Then Harris denied Stauskas hard off the ball and pressed into him when he caught the ball. Stauskas didn't score over the last 13 minutes of the first half. 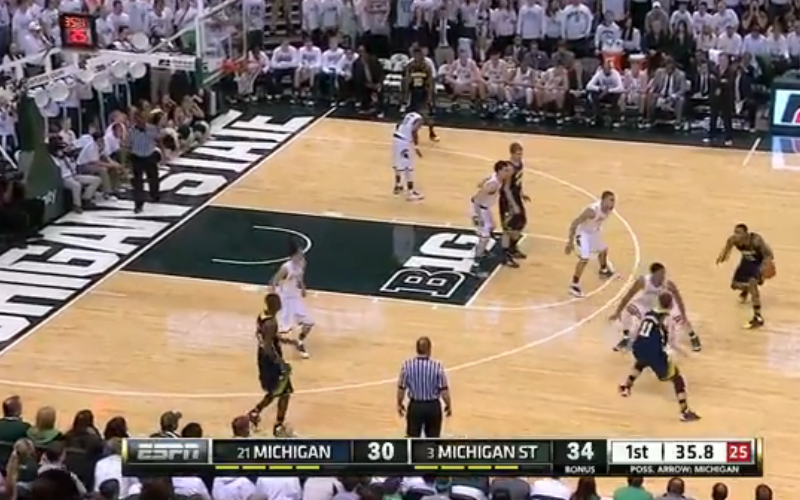 On one possession, Harris denied Stauskas the ball three different times. Michigan wasted almost the entire shot clock trying to get him the ball, but couldn't and it resulted in a turnover.

Offensively, Harris scored in a variety of ways: In transition, off pin-down screens, around pick-and-rolls, in isolation. He did struggle at the rim, though. The five two-pointers he missed were in the paint. Harris has a quick first step and a nice right-to-left crossover, but he doesn't have a plan when he gets to the bucket and he doesn't have the strength to go through bigger defenders. He shot just 58.3 percent at the rim in his sophomore season, per Hoop-Math.

Harris measures out (6'4, 6'6.75 wingspan) similar to former Florida Gator and current Washington Wizards guard Bradley Beal. But Beal shot 65 percent at the rim in his freshman year at Florida. Beal, like Harris, is short for a two-guard, but he's built like a Mack Truck. Harris he needs to add some upper body strength, if he wants to finish at the rim as well as Beal.

But overall, this was a very nice performance from Harris. He scored efficiently, rebounded well, took care of the ball and did a nice job of forcing Stauskas into tough shots. It's important to note that while Payne and Dawson were out, senior point guard Keith Appling played in this game. This allowed Harris to function away from the ball, where he's best at scoring.

Harris had very few bad games at Michigan State; he scored in single digits just three times all season. Still, this performance against Wisconsin was abysmal.

Michigan State was without Appling in this game, giving Harris a chance to act as a lead guard. Harris failed to take advantage, struggling to create offense for himself and for others. Wisconsin hedged Harris hard on screens and worked to take away his mid-range game. Harris recognized this and floated to the arc. He tried to create offense himself, but resorted to dribbling the ball into poor, contested fall away jumpers.

Shooters are taught to forget their last miss. This basketball proverb is used to teach shooters to remain confident in their ability to make jumpers. But what happens when a shooter just keeps shooting and missing? Harris missed his first eight shots from the field and started pressing to break the slump, eventually settling for long, contested jumpers early in the shot clock. 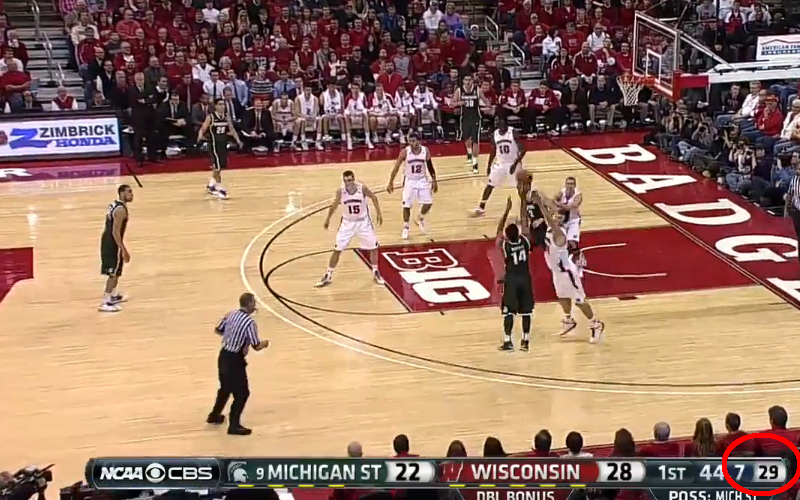 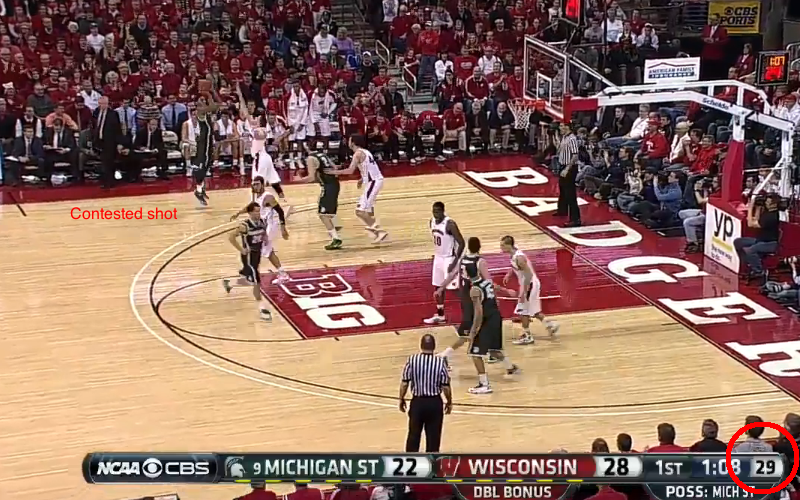 Near the end of the first half, he finally got an open look. 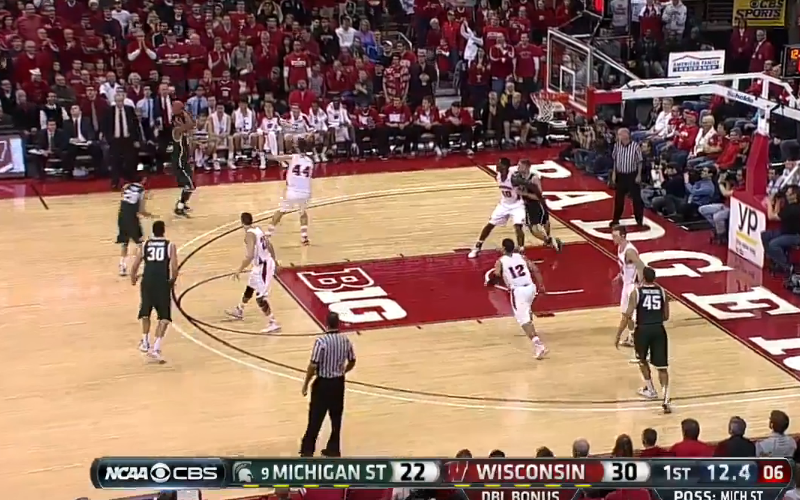 But he had already missed his first seven shots. He couldn't find his rhythm; this open shot rimmed out as well. Harris continued pressing early in the second half, taking more contested jumpers: 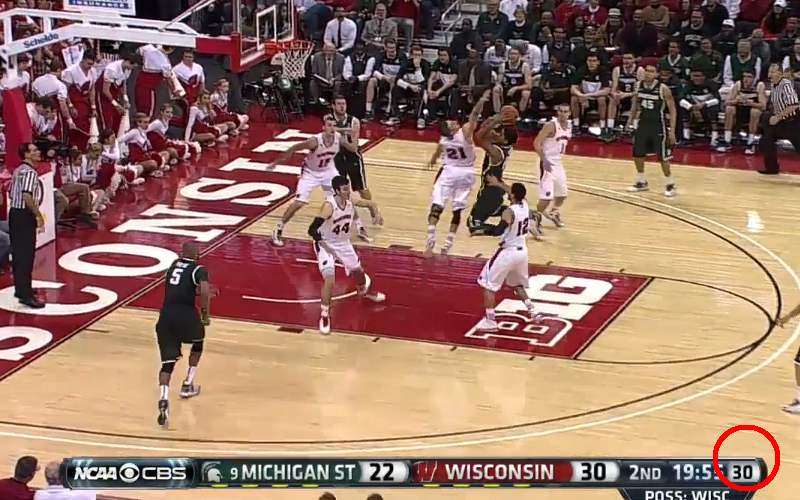 That shot was blocked.

Michigan State finally countered Wisconsin's hard-hedging defense by clearing out one side of the floor and allowing Harris to work with Payne in a series of side pick-and-rolls. 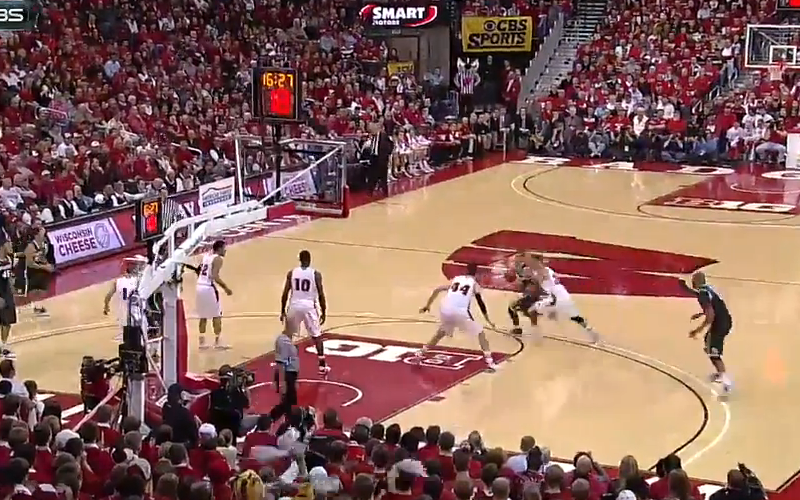 The result was somewhat of a mixed bag: On the first possession, Harris zipped a bounce pass to Payne for an open baseline jumper. Later, Harris courted the defense to the center of the floor and found Payne on the perimeter; Payne attacked a hard close out for a layup. Moments later, Harris telegraphed a pass into the waiting arms of a Wisconsin defender.

Harris was uncomfortable without Appling. The senior point guard missed three straight games in February and during that stretch, Harris averaged just 11.3 points on 14-of-49 (28.6 percent). Harris can work as a secondary ball handler, but he needs a point guard to get into the teeth of the defense and find him on the perimeter for open shots. That is when he's at his best. He wasn't at his best against Wisconsin.

Somewhere in the middle: Illinois, March 1

Appling was back in this game and Harris was the beneficiary. Appling isn't a very good NBA prospect, but he was a solid college point guard, able to get in the paint and open up shots on the perimeter. Look at how much attention he draws here: 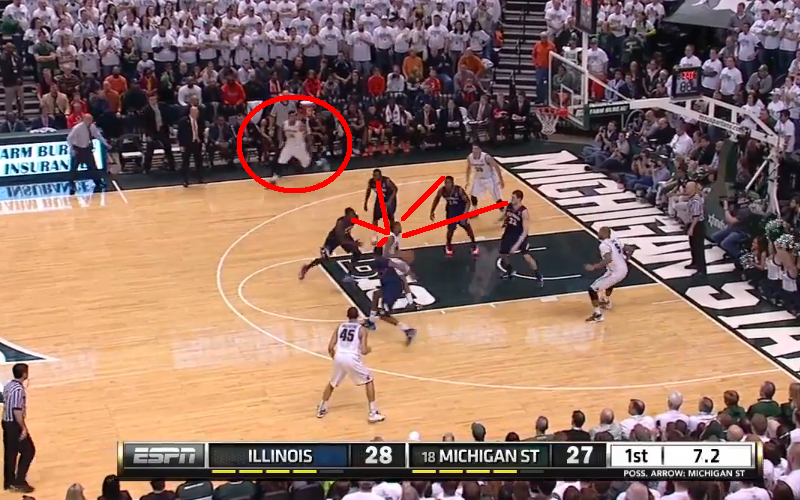 Harris can score off step back and pull-up jumpers, but he's at his best working without the ball. He scored 1.14 points per possession in catch-and-shoot situations, per DraftExpress, a good number for a guy who worked mostly off the ball.

Against Illinois, his first made shot was a wide-open three-pointer from the top of the key. He missed his next two attempts from the floor, but he made his mark on the defensive end.

He jumped the passing lane and stole a post entry pass. A few possessions later he blocked a shot near the rim, saved the ball from going out of bounds and started a fast break. Watch how he just pick pockets his man in the post here:

Later he sunk a wide open spot-up three, then drilled another long ball off a dribble hand-off play. In the second half, Illinois switched to a full court press and backed into a 2-3 zone. Look at how that zone warps towards Harris: 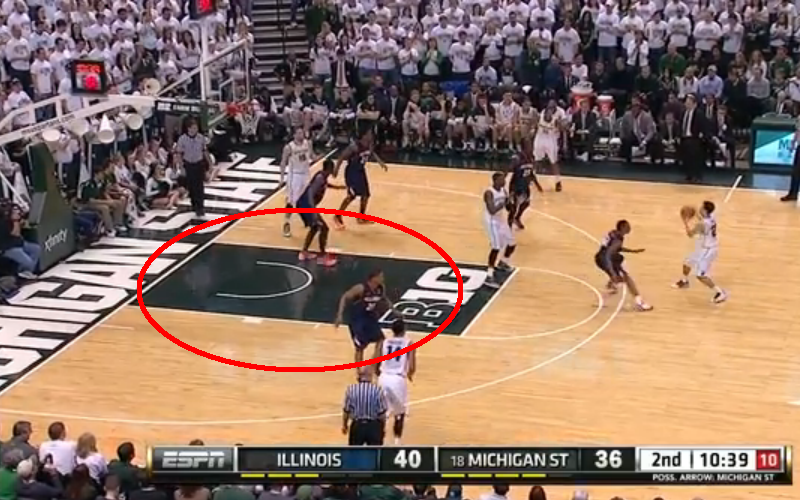 That should be enough space create, but Michigan State couldn't take advantage. It's offense just fell off a cliff in the second half, scoring just 19 points in 20 minutes. Harris hit a few shots behind the arc and made some nice defensive plays, but it wasn't enough for the Spartans to win.

That's what you get from Harris: three-point shooting and defense. It wasn't enough to carry Michigan State against Illinois, but that's not what he'll be asked to do in the NBA.

Gary Harris lacks the size or athleticism to be a star in the NBA, but that doesn't diminish his value near the back end of the lottery. He moves well off the ball and can score in a variety of ways off screens. He's a feisty defender with the quickness to stay in front of either guard spot and the willingness to fight through screens.

He runs pick-and-rolls well enough to be a secondary ball handler, but he works best alongside a point guard, like Appling, who can set him up for open shots off catch-and-shoot situations. He's a solid jump shooter that can also play defense. How many 19-year-olds can say that?