The big Doug McDermott scouting report: Can college basketball's best cut it in the NBA?

The former Creighton forward is the best shooter in the draft, but he comes with some caveats. Are those enough to prevent him from being a useful pro?

Share All sharing options for: The big Doug McDermott scouting report: Can college basketball's best cut it in the NBA?

After putting together one of the most impressive résumés in college basketball history finishing fifth all time in points scored, former Creighton forward Doug McDermott is finally making the leap to the NBA. He was a spectacular four-year college player who put up gaudy numbers in a system designed around him. While some of the things he did in college will translate to the pros, others will not.

Luckily, what McDermott does best is his most translatable skill. When I say that McDermott can shoot, I mean the dude can flat out shoot a basketball. He shot more than seven threes a game and hit 45 percent of them as a senior. He nailed five or more threes in eight different games. McDermott's range easily extends to the NBA three-point line.

Per DraftExpress, he scored 1.44 points per possession off screens, 1.31 off catch-and-shoot situations and 1.154 off the dribble. That puts him atop DraftExpress' Top 100 in each of those categories. That's absurd. Admire his incredibly fiery-red shot chart.

It's even more impressive when you consider how opposing defenses always keyed in on him. McDermott developed other ways to score over his four years at Creighton. He grew into a crafty post player and developed a one-footed, Dirk Nowitzki-like fadeaway to create space against quicker defenders.

At 6'7 with a 6'9.25 wingspan, McDermott sizes out as a typical NBA wing, but he doesn't have the lateral quickness to defend the three-point line. He registered a horrible steal rate (0.4 percent) and block rate (0.5 percent), statistics used to quantify athleticism. In four years, McDermott played more than 4,500 minutes and blocked just 14 shots, despite playing almost exclusively at power forward. How is that even possible?

Throughout our profile series, we've used Phoenix Suns GM Ryan McDonough's method of scouting, as described to SB Nation's Paul Flannery. We've taken an in-depth look at three games: a prospect's best and worst performances, and another somewhere in the middle.

Unfortunately, there aren't many easily-accessible 2013-14 Creighton basketball games, since Big East games are not on ESPN3. So, we are limited with the tape we can break down. Instead, we're going to analyze one game, a poor showing against Baylor in the NCAA tournament, and observe what Baylor did to limit McDermott.

Stat line: 15 points, 7-of-14 shooting, 0-of-3 from three, two rebounds, one assist, four fouls, one 30-point elimination in the NCAA tournament.

This game is particularly important to note because it gave us the opportunity to see how McDermott reacted to playing against an NBA-sized front line. Baylor played Isaiah Austin (7'0, 7'4.5 wingspan) and Cory Jefferson (6'9, 7'0 wingspan) in the starting lineup, with Ricardo Gathers (6'8, 260 pounds) coming off the bench.

Creighton was the best three-point shooting team in college basketball, but Baylor stuck to its extended 2-3 zone. The Bears used two small, pestering guards out top and relied on the length of their back line to disrupt shooters on the wings and in the corners. They were meticulous about where McDermott was on the floor, leaving their zones to chase him around screens and pointing him out everywhere on the court.

It didn't matter how far McDermott was from the basket. When he caught the ball at the top of the key, Baylor's guards were all over him. 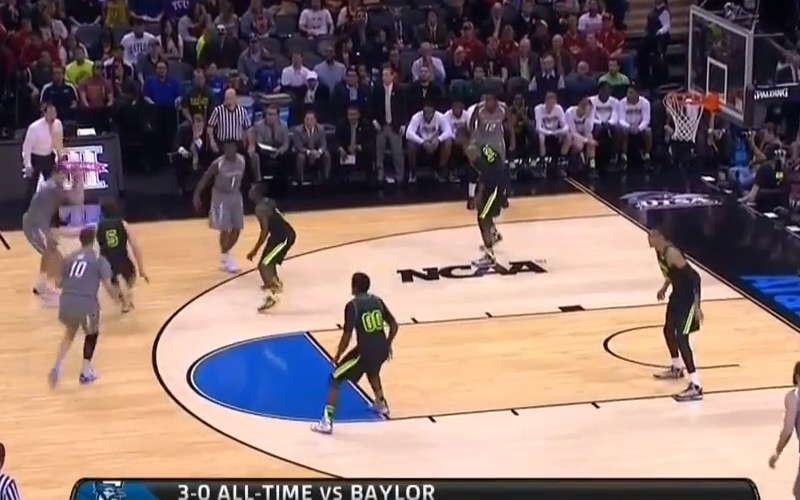 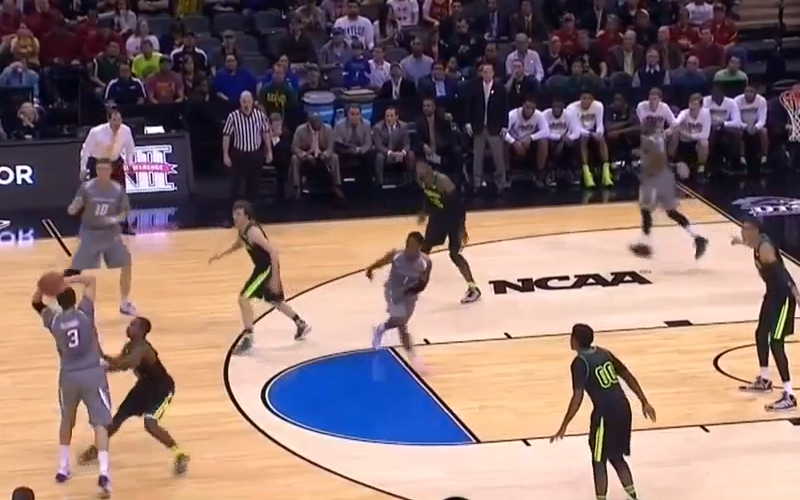 McDermott is particularly dangerous as the trail man on the fast break. He will time out his run and flash to the top of the key or the wing, catch the ball in secondary transition and drain the three-point basket before the defense can react. But any time he tried to do this against Baylor, the guards where on top of him. 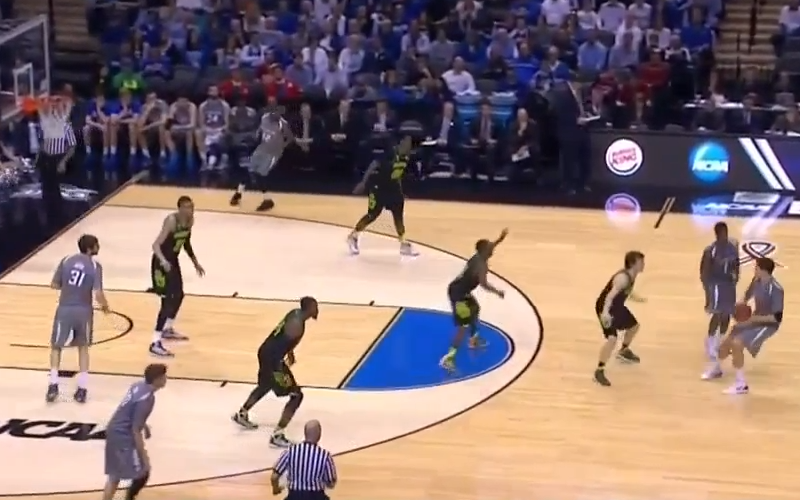 If McDermott caught the ball in the corner, there was almost always two huge, long defenders running at him. On several different occasions, he was trapped in that spot. To his credit, though, he never turned the ball over. But look at how Baylor's defense reacts to him catching and shooting in the corner. There are two dudes hounding him here: 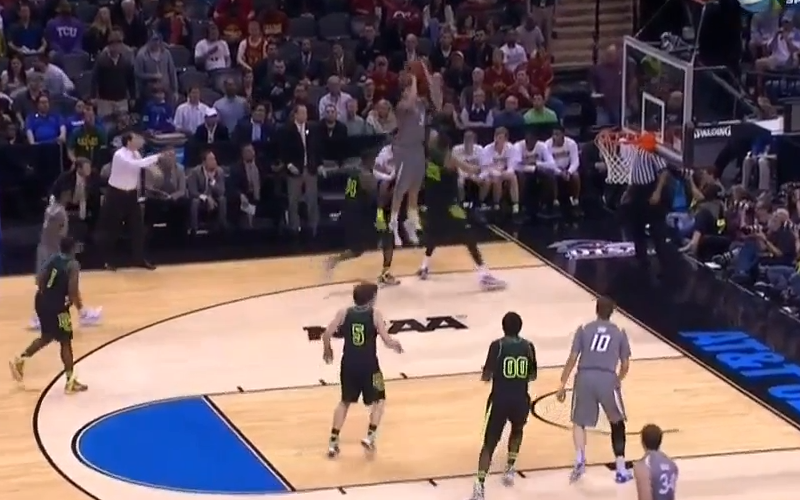 McDermott was forced to sit out midway through the first half with two fouls. One of those personals came against Austin in the post; the other was on a free-throw line block out. In both situations, McDermott was too small to match up against Baylor's size and was forced to foul.

This is why it's tough to imagine McDermott playing long stretches as a power forward in the NBA. He just isn't big or strong enough to deal with those types of players.

He is, however, a very smart team defender. He was almost never in the wrong spot against Baylor. Creighton played soft hedges on pick-and-roll situations and McDermott did just fine in that scheme. He was able to contain penetration then recover back to his man. Off the ball, McDermott was almost always in the right position, whether it was sinking from his man in the corner to help off a pick-and-roll, laying back off bigs on the perimeter to help in the paint or any other kind of coverage. 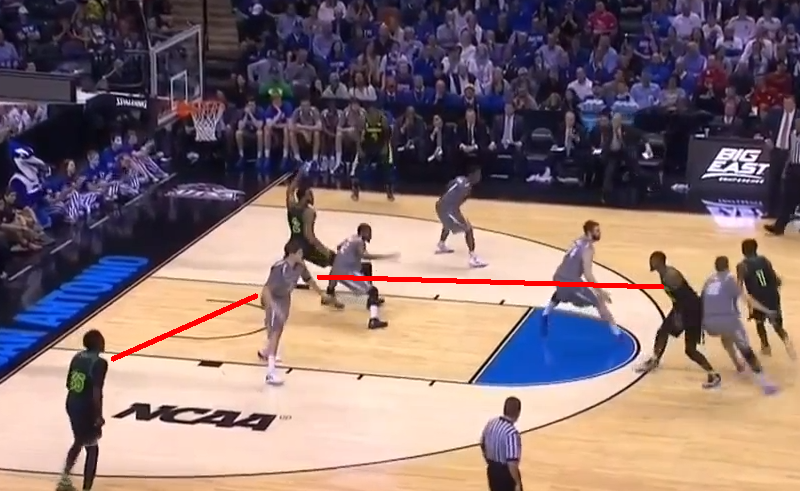 Here, he does an excellent job of rotating over and cutting off an easy bucket:

But all of that was through effort and defensive awareness. There were several times when he was in the right position, but just didn't have the athletic ability to make a play. Watch Kenny Cherry leave him in the dust on this pick-and-roll:

Or Austin drop in an easy turn around bucket over him:

McDermott is in the right spot to make a play in both of those situations, but just doesn't have the requisite athleticism to do anything.

Baylor's team length really affected McDermott near the basket, too. He actually shot 68.5 percent at the rim, per Hoop-Math, but he relied mostly on his advanced touch around the basket to score. Against Baylor, he couldn't do that. The back line was just too big.

Eventually, Creighton put McDermott in the middle of the zone, allowing him to flash in the high post and slip out to the perimeter. McDermott scored several times from that 10- to 12-foot range, using his one foot fadeaway and soft touch around the basket. My favorite bucket came in the second half after he read Baylor's aggressive, found a soft spot in their zone and scored off a slip to the basket:

But by the time Creighton figured out that putting McDermott in the middle of the zone led to good things, the game was already way out of hand.

This performance basically confirmed what we already know: McDermott won't be the scorer he was in college in the NBA because he struggles to score inside against NBA length. Despite being a smart team defender, he will never provide rim protection or a bunch of steals.

But he also won't be asked to do those things. In the NBA, he'll be asked to do one thing: Shoot the ball. McDermott is such a wonderful shooter that he will provide precious pockets of space to open up the floor for his teammates. You can't leave him alone on the perimeter or it's a bucket. There are few guys who come to the NBA with such a defined skill.

McDermott is a spectacular shooter and he can do it in a number of ways: Off pin-downs, flair screens, with the ball in his hands, hand offs, spotting up, etc. He's also developed a few nuances that help him get his shot off against more athletic defenders.

But he isn't going to be even an average one-on-one defender in the NBA against either forward position. He doesn't have the size or length to defend power forwards and he doesn't have the lateral quickness to stay in front of wings. He is, however, a smart team defender and you can afford to hide him on the opposing team's worst offensive player in certain lineups.

McDermott won't put up the scoring numbers he did in college, but that's OK, he won't be asked to. He'll be asked to do one thing: Shoot the rock. That's something he's very good at.