Many international prospects will be picked in the 2014 NBA Draft, and several come with their own set of unique circumstances. Why won't many come over to the NBA immediately? What is a "Eurostash?" We answer all these questions in this piece.

Share All sharing options for: A complete primer on drafting international NBA prospects

The 2014 NBA Draft field includes 13 early entry candidates from abroad, keeping with the league's tradition of adding international flavor at a steady rate. If you need proof that the international prospects matter, check out the Spurs' championship roster.

But there are some quirks about drafting international prospects you should know about heading into Thursday's derby. Let's dig in.

Eligibility for the draft

American players aren't eligible for the NBA Draft until one year after their high school class graduated. Schooling is different abroad, so there's a different but simple eligibility rule for internationals: they must turn 19 in the calendar year of their draft to be eligible. In the calendar year in which they turn 22, they are automatically eligible to be drafted. If they go undrafted by age 23, they can only join the NBA as free agents.

International prospects also have more time to test the waters, thanks to the distinct lack of the NCAA in their lives. Early entry internationals had until mid-June to withdraw their names from consideration -- 17 of them, including potential lottery pick Kristaps Porzingis, did so -- whereas NCAA rules forces college players to make a decision in April if they want to preserve their college eligibility.

While American players typically come from the college ranks, where there are no contracts to deal with, internationals typically play professionally overseas in their teenage years. That can make the transition to the NBA very tricky. If, for instance, a 17-year-old French player signs a four-year deal with a European club, but makes himself eligible for the NBA Draft just two years into the contract and is picked in the first round, everyone needs to figure out how to deal with the two years left on the Euro club contract. This will be an issue with whoever drafts Dario Saric, a potential lottery pick that just signed a contract with a Turkish pro club.

Most foreign teams aren't amenable to just ripping it up. There's some good justification for that, too: teams are investing resources developing teenagers, only to see another club in another country reap the benefits. So in these cases, compensation and often some wrangling ensues. In cases where the contract is too onerous or the international club too difficult to deal with, the drafted prospect may play out the deal before joining the NBA team.

And of course, because situations like this put a strain on NBA teams' ability to bring prospects into the fold ASAP and easily, foreign contracts absolutely figure into teams' assessment of prospects' value. If you have two equal internationals, but one is not under contract while the other has an onerous foreign deal, the one without a contract will go higher every time.

Still, players with foreign contracts still get drafted. It can often be a nice value play. If the NBA team wants to bring the prospect over ASAP, and the player is amenable, then the sides will work on a buyout. The dollar figure of the buyout will often be written into the foreign contract, and it may be an NBA-exclusive clause.

NBA teams cannot pay this straight out. League rules govern the cap on the amount of cash a team can contribute to a foreign buyout. For 2014, that figure is $600,000. The player must pay the rest out of his salary. If it's a hefty buyout, that can cause problems unless a player is taken very high in the draft. Any portion of a buyout paid by the team does not count against the salary cap.

The intent of the cap on team-provided buyout funds is two-fold: it levels the playing field between cash-rich and low-revenue teams (much like the salary cap itself), and it deters international clubs from holding prospects "hostage" by making it illegal for NBA teams to pay exorbitant ransoms.

An expensive buyout is the issue most likely to give NBA teams heartburn about drafting an international prospect.

"Eurostash" is a colloquial term for players who NBA teams draft with the intent of developing outside of the league, typically in Europe. Eurostash players aren't always internationals -- raw prospects or those from small conferences are also used in this fashion, especially if the NBA team that picked them has a crowded 15-man roster. 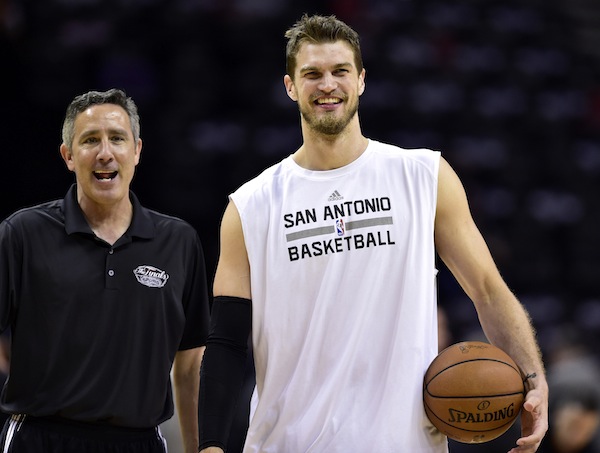 When a drafted NBA player goes to or stays in Europe, the team that drafted him retains his NBA rights but does not pay him. The European club does. The NBA team can bring him back at any time by signing the prospect to a rookie deal. If he's a first-round pick, the salary schedule is already set in stone based on what pick was used on him. If he's a second-round pick, there's some room for negotiation. In either case, the player must consent by signing the deal. In some cases, there may be early exit clauses and maybe even a buyout with the European club, though these contracts tend to be less dramatic than pre-draft deals.

Players taken as Eurostash prospects recently include Mike Muscala, Lucas Noguiera and Pierre Jackson. Note that Eurostash players are typically considered distinct from players with pre-existing international contracts who stay overseas to wait out a buyout or because they aren't interested in jumping to the NBA immediately. Tiago Splitter, who stayed in Spain three years after being drafted, would fall into that category.

There's another wrinkle to drafting international prospects. It actually applies to all draft picks, but in a practical sense only comes up with respect to internationals. It's the three-year rule, which allows that if a first-round pick does not sign a rookie deal with the NBA team that owns his draft rights within three years of being drafted, the rookie scale no longer applies to him. In other words, a 2014 first-round pick could spend the next three seasons playing abroad and in the 2017 offseason sign a deal with his NBA team without regard for the rookie scale. Splitter and Nikola Pekovic have taken advantage of that clause in recent years to sign deals that didn't follow the rookie scale. And the Timberwolves famously convinced Ricky Rubio to come over to the NBA after two years post-draft in Spain when it appeared he'd wait three.

There's another wrinkle here. We'll call it the one-year rule. If a player is drafted but does not play basketball for or sign a contract with any internationally recognized professional team for one year, that player is tossed back into the draft pool the following year, unless that player has reached an age at which he automatically becomes a free agent. This is basically a shadow clause never used as more than a vague threat.

Why so many internationals go in the second round

You will hear a lot more international names called in the second round than in the first. Teams are more likely to take risks with second-round picks in general, plus there are any number of 22-year-old internationals automatically eligible for the draft who may be interested in coming to the NBA down the road. By picking up their NBA rights with a second-round pick, you exert a bit of control in how they come to the NBA, and can receive the first go at them or get some compensation down the line.

In addition, drafting a player willing to go or stay overseas is a good solution to roster issues. Not all American players will want to begin their pro careers in the Adriatic League; internationals are typically more comfortable playing abroad early on. So if you have a late second and know you don't have roster room, picking an international is just easier than picking an American and convincing them to go to Europe.

But perhaps the biggest reason the second round is home to more internationals is because there is no salary scale for second-round picks. That makes dealing with contract buyouts more feasible. While NBA teams can only contribute up to $600,000 directly to a foreign buyout in 2014, in the case of second-round picks the NBA team can give the player a higher salary, part of which goes toward paying the buyout. Of course, this counts against the salary cap, so it's not foolproof. But it's easier to do a buyout deal with the No. 31 pick (first pick of the second round) than the No. 30 pick (last pick of first round) because of contract flexibility. You'll often hear reports that certain internationals want to fall out of the first round for this reason. The likely candidates for such a report this season are Clint Capela and Bogdan Bogdanovic.

Who are the international prospects to watch in 2014?

We expect to see one international in the top five (Dante Exum), perhaps three in the lottery (Exum, Dario Saric and Jusuf Nurkic), up to 10 in the first round (though more likely 5-7) and perhaps 20 overall.

Exum, the Aussie point guard, comes with no contract baggage whatsoever. (Australians rarely do.) Saric could cause some heartburn -- he bounced between entering and staying out of the 2014 Draft for the better part of a year, and he's staying in Europe for a couple more years. Nurkic, a Bosnian center, is said to have no buyout issues, though he is just 19 years old and as such might be a Eurostash candidate.