Here's where NBA stars are most likely to be drafted

Where are you most likely to find a superstar talent in the draft? Are they always drafted in the top five, or is there reason for teams picking later to have hope.

Share All sharing options for: Here's where NBA stars are most likely to be drafted

If you want a draft a future All-NBA player — that is, one of the top 15 players in the league in any given year — do you need to be picking in the top five? Or, can you find them elsewhere? I put together this chart to illustrate the data.

There have been 51 different players named to an All-NBA team over the past 10 seasons. Below, you can see what percentage of them were picked in what range. 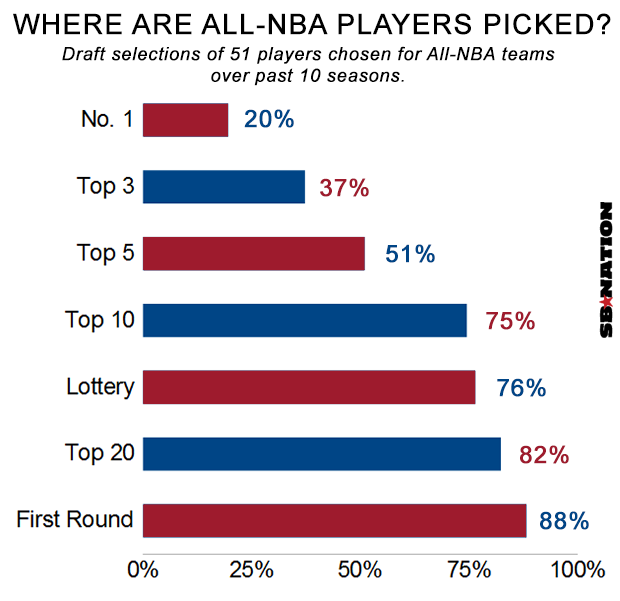 Ten of 51 All-NBA players were No. 1 overall picks, but there were nine more who went Nos. 2 or 3. It's a bit surprising, though, that nearly half — 25 of the 51 — of the All-NBA players from the past decade were picked outside the top five. That shows a good bit of top-line value beyond the big names.

That said, half of those All-NBA picks outside the top five were taken in Nos. 6-10. (Odd quirk: there hasn't been a single No. 8 pick on the All-NBA team in the past decade, but several No. 9s and 10s.) So less than a quarter of the All-NBA players in our sample were taken outside the top 10, and a quarter of those were second-rounders, usually international prospects who didn't jump to the league immediately.

This only considers star players, of course; a chart looking at starters or rotation players would be mighty different. But since most teams want to pick stars above all, it's a useful way of looking at things.