The focus on the NBA Draft is on the players picked in the lottery. Who went first? Who went in the top five? But while those prospects strolled along the stage and shook commissioner Adam Silver's hand, many other players were forced to sit around and hope their name was called. In many cases it was, even if it was lower than they may have hoped.

That doesn't, however, mean all of the players found a home on Thursday night. Many players -- including plenty of notable college stars -- went undrafted and will now have to attempt to catch on in the Summer League. First-team All-Conference players, NCAA Tournament stars and even a first-team All-American were among the undrafted.

Here is a look at some of the top players not selected on Thursday night. 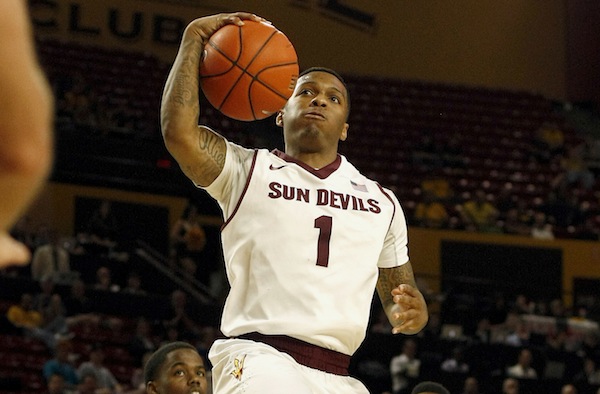 Carson used his explosive first step and speed to make an instant impact at Arizona State. He averaged 18.6 points, 4.6 rebounds and 4.0 assists last season as a sophomore. He opted to declare with two years of eligibility remaining, but his scoring prowess wasn't enough to overcome his size. Listed at 5-10 and 180 pounds, Carson is undersized even for an NBA point guard. He likely has the quickness to play at the next level and could be instant offense off the bench, but teams typically bank on size and Carson doesn't have it. His decision to declare early may not have been too big of a mistake because if size was an issue now, it would be in another year or two. Players his size can make it as bench players in the NBA, but he'll have to prove teams he isn't a liability on the floor.

A bruising power forward, Young was projected as a possible late first-round pick by some analysts. Physically he's plenty strong and has an imposing frame at 6'9 and 240 pounds. During his college career, there were some questions of whether he was too strong and if it limited him in other areas. He was never much of a scorer at Florida and wasn't a great rebounder, averaging just 6.2 rebounds per game last season. While he's drawn Ben Wallace comparisons from some, Young has never proven to be the shot blocker or one-on-one defender Wallace was. He'll likely need to make a roster as an energy rebounder off the bench, similar to Reggie Evans.

There was time McAdoo was thought to be a future lottery pick, but he never developed as expected at North Carolina. Athletically, he has the skillset to be an NBA player to go along with a 6'8 frame and long wingspan. He lacks an offensive skillset to project to the NBA. He struggled on offense at North Carolina and was a non-factor at times for the Tar Heels. While he can likely hold his own defensively in the NBA, he's very much a developmental prospect.

Once one of the most highly-touted recruits coming out of high school, Brown went undrafted after entering the draft following his junior season. He put up good numbers at Missouri, averaging 19.9 points per game, but size was a bit of an issue. At 6'4, Brown is somewhat undersized playing the two in the NBA but he never demonstrated the passing skills to transition to the point. While a good scorer in college, Brown's size diminished his prospects at the next level.

He could project as a small forward in the NBA, but there is some question whether he has the quickness to defend NBA wings.

Ejim filled up the stat sheets at Iowa State and was a double-double threat on a nightly basis. He turned in a few dominating performances, including a 48-point, 18-rebound effort against TCU. While he averaged 17.8 points and 8.4 rebounds per game last season, he did so as an undersized four at the college level, let alone the NBA level. At 6'6 and 220 pounds, he's a power forward trapped in a shooting guard's body. He could project as a small forward in the NBA, but there is some question whether he has the quickness to defend NBA wings. Undersized players like Ejim have made it in the league and he could too, but he'll have to do it by impressing in the Summer League and earning a spot in training camp.