No matter what happens in the Finals, Tim Duncan's legacy is secure. His game is both timeless and immortal, which makes placing Duncan in a proper historical context all the more challenging.

Share All sharing options for: Tim Duncan is the NBA's timeless superstar

By the time the Finals are over, LeBron James will undergo yet another thorough examination. He has already been crowned and validated, but no matter, we still want more. A third straight title will put him in championship company with Michael Jordan. That's the new standard for James, who is competing with history as much as the present.

This is the covenant we make with superstars and it seems certain that we will never be satisfied with LeBron while he's active. In a way, that's a compliment to a transcendent player. Mere competition is not enough. For James, there must be higher stakes. Certainly Kevin Durant would sign on for that level of scrutiny if it meant winning championships.

What's unique about this Finals is that the same is not true for the other iconic player in this series. No one tries to rank Tim Duncan anymore. There have been some attempts at declaring him the best power forward and whatnot, but that's semantics. If he wins another championship seven years after his last one it will be a remarkable achievement, but it won't alter our perception of him in any meaningful way. 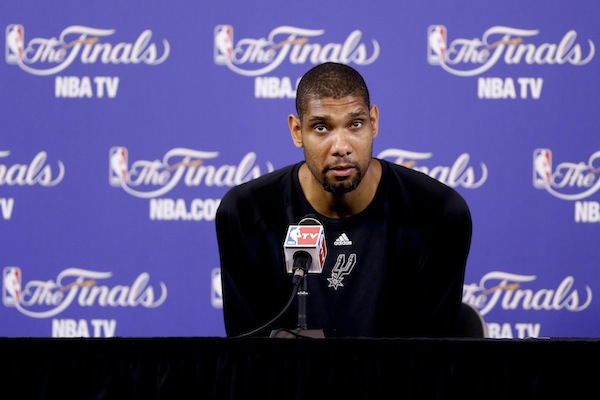 Duncan has been accepted as one of the all-time greats for more than a decade and there was never a serious debate about whether he belonged in that company. He was there almost from the moment he entered the league. We have never wanted anything more from Duncan. He is as he's always been.

It's easy to place Duncan, but harder to quantify his exact place in the league's hierarchy. Even making the attempt seems to miss the point of his career. You can start with the raw numbers -- 24,904 points, 13,940 rebounds, 2,791 blocks, 14 All-Star appearances, four championships and two MVPs -- and not come close to measuring Duncan's impact. We have other metrics that are more precise but even they don't truly capture his essence.

What stands out about Duncan is that he has been the platonic ideal of a franchise player. As ESPN's Marc Stein noted in his excellent retrospective, the Spurs like to say that they work for Duncan, but it seems more accurate to suggest that they work through him.

He's the anchor of both their offense and their defense and his competitive, albeit reserved, personality defines them on and off the court. The Spurs as we've come to know them exist because of Duncan; everything flows from his presence. There is no Pop without Duncan and as great as Tony Parker and Manu Ginobili are individually, they wouldn't have reached their exalted status without the big fella. It's one of the charming aspects of his low-key persona that no one spends much time worrying about it. 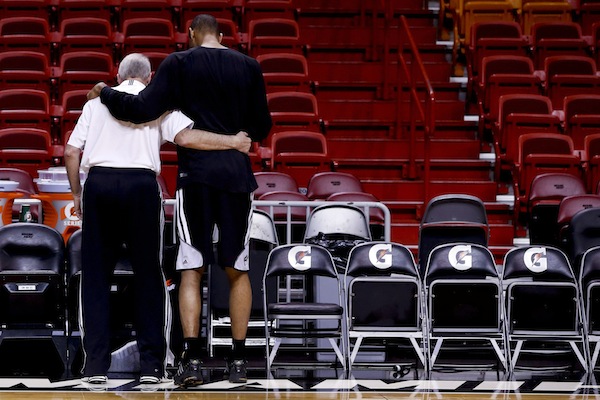 What can be said is that Duncan belongs to a special lineage as old as the game itself. It's possible to trace a complete circle through the history of the NBA simply by following the arcs of the great big men. Duncan exists on the end of that spectrum with no obvious successor in sight. That may be his greatest achievement. He is immortal, but then, he's always been that way.

The big man canon starts with George Mikan and then gives ground to Bill Russell and Wilt Chamberlain, who more or less built professional basketball as we know it. Their rivalry defined the league and set the parameters of modern debate. In Russell and Wilt we had individual accolades measured against team triumphs. With apologies to Magic and Bird, who were more alike than they were dissimilar, Wilt and Russell are the polarizing basketball matchup.

In the 70s there was Kareem Abdul-Jabbar, whose dour expression cast a gloom over a lackluster era but belied one of the most graceful players of all time. His reign was so long and so complete that it completely overshadowed his peers, including Hall of Famers like Moses Malone, Bill Walton and Robert Parish.

In Kareem we see shadows of Duncan. Like Jabbar, Duncan eclipsed his contemporaries by nature of his longevity and his overwhelming success. And like Kareem, the Spurs' big man has kept the public at a distance with a manner that can be charitably called aloof, but hints at deeper thoughts kept private. Like Kareem, this has hurt him in some respects but one suspects that Duncan doesn't care all that much.

It's possible to trace a complete circle through the history of the NBA by following the great big men. Duncan ends that spectrum with no successor in sight.

The next wave of great centers arrived in the mid-80s with the debuts of Patrick Ewing, Hakeem Olajuwon and David Robinson, but the game had changed. This was Larry Bird and Magic Johnson's league now, and soon it would be Jordan's. There were also crazy athletic fours like Charles Barkley and Karl Malone running the break and competing for time in the post.

Of the three, Hakeem was the only one to win a championship as an undisputed franchise player. Before Parker and Ginobili blossomed, Duncan's Spurs were most similar to the Olajuwon's Rockets in that without him they were merely pedestrian. With him in the middle they were perennial contenders.

By the dawn of the new century, the notion of the dominant big man seemed passé, but right on cue, Shaquille O'Neal overwhelmed the sport with his massive size and surprising agility. Shaq was both evolutionary and an anachronism. There were freakish players joining the league during his era, raised on Magic and Jordan and not content to sit in the post all night and bang bodies with the other giants. Duncan was the exception and of all of his foils, he was the one Shaq couldn't rattle.

That was the league Duncan joined in 1997. Like his peers he resisted the center label. Even today the Spurs insist on calling Duncan a forward. Kevin Garnett made sure everyone knew he was no 7-footer and he sure as hell wasn't a center. No one knew what to make of Dirk Nowitzki at first, but again, not a center.

Before the term came into vogue, KG and Dirk were stretch fours who helped move the game away from the basket and out on to the perimeter. Duncan was not that. No revolutionary, he was a classic back to the basket pivot man who evolved subtly over the years.

For more on Tim Duncan and the Spurs

It was possible once to compare KG and Duncan on the grounds that Garnett's career would have turned out differently if he had played for Gregg Popovich instead of toiling away in Minnesota for a franchise that wasted his best years on shaky rosters. During their prime they were statistically closer than many wanted to acknowledge, but again, it's Duncan's durability that has rendered this discussion null and void.

Duncan, then, is best understood as an amalgam of Russell, Kareem and Olajuwon. Like Russell, he will spend his entire career with one team. As with Abdul-Jabbar, his longevity eclipsed his peers and left him with no contemporary rivals. Like the Dream he did his best work on the block and was as important offensively as he was defensively. Within all that lies one of the most complete players the league has ever seen.

To say Duncan ranks second, third or fourth is not essential to understanding his place in history. His era makes him unique, but his game has defied trends. He is timeless, and apparently ageless. There will be no reckoning for Duncan when this series is over, simply an acknowledgment of a brilliant career that has brought the league full circle.