The former Indiana Hoosier has all the tools to be a very good NBA power forward, but it's going to take patience and a good deal of coaching to get him there.

Share All sharing options for: The big Noah Vonleh scouting report 2014: An impressive slab of clay

Former Indiana power forward Noah Vonleh has catapulted himself up draft boards during the pre-draft workout process. He has prototypical power forward size (6'9.5 in shoes, 247 pounds) and length (7'4.25 wingspan) and matches it with an unusually balanced skill set. He handles the ball well for his size and can step out to the three-point line. Of course he looks great in individual workouts!

He also has enormous hands. Just watch the 1:33 mark of the video below. Vonleh runs block-to-block, grabs a basketball and dunks. But he does so by grabbing the ball off the ground with one hand, alternating hands between dunks. It's incredible. Vonleh uses those massive, strong hands to grab rebounds; he nabbed 19.4 percent of all available rebounds, which puts him just behind Joel Embiid (20.5 percent) as the second-best rebounder in the draft.

He isn't consistent enough yet, but Vonleh also has the size and athleticism to develop into a versatile defender.

Vonleh is still very raw on both sides of the ball. He turned the ball over on 18.6 percent of his possessions and recorded 4.1 fouls per 40 minutes, per Sports-Reference. He has a habit of bringing the ball low, right into the hands of reaching defenders.

He has the athleticism to get to the rim, but he often puts his head down and loses sight of where he's at; he shot worse at the rim (59. 3 percent) than Aaron Craft (60.6 percent) did, per Hoop-Math. That's a very low percentage, especially for a big man.

Vonleh had other games in which he scored more points, but he put together a complete package in his second matchup against Michigan State. He scored efficiently in a variety of ways, played well on defense and added rebounding to go along with it. But it's important to note that Adreian Payne, Michigan State's star big man, sat out with a foot injury. Payne guarded Vonleh three weeks earlier and held the freshman to five points on four shots.

It was clear from the start that Vonleh was much more comfortable with Matt Costello, an inferior athlete to Payne, guarding him. On the first possession of the game, Vonleh fought for post position, didn't get it and floated to the arc, where he promptly knocked down a three-ball. Costello came right back at him in the post, but Vonleh put his arms straight up, forced a bad shot and corralled the rebound. Vonleh scored again moments later in the post.

He started the game 3-of-3 for seven points in the first eight minutes of the game. His third bucket showed off an impressive combination of touch at the rim and footwork. He feels his defender cheating up on a ball screen and slips to the basket, scoring in between several defenders.

In the second half, he showed off his left hand in the post. Take this gorgeous drop step from the right block:

Moments later, he scored on an up-and-under, again with his left hand. The issue in this game was that Vonleh only shot the ball three times in the second half. In all, he shot just eight times. On the season, Vonleh took 10 or more shots just seven times. Seven. He was fifth out of Indiana's rotation players, averaging 10.9 shots per 40 minutes.

Part of the blame has to go to Indiana coach Tom Crean. Vonleh was by far the most efficient scorer on the team and a matchup nightmare at the college level, yet Indiana often sacrificed poor possessions to other, less efficient players.

But some of that blame goes Vonleh, too. There were stretches in every game that he drifted. Andrew Wiggins is criticized for being too passive, but he registered a usage rate (26.3), nearly 5 percent higher than Vonleh (21.4). He dominated when he was aggressive, but that aggression came in waves.

Vonleh's worst game came early in the season against Connecticut, when he registered zero points, four turnovers and four fouls, but video of that game doesn't exist on the Internet. Instead, I watched Vonleh in his only Big Ten Tournament game, so that I could evaluate him at the end of season and see how Illinois defended him.

The Fighting Illini doubled Vonleh every time he touched the ball in the post. 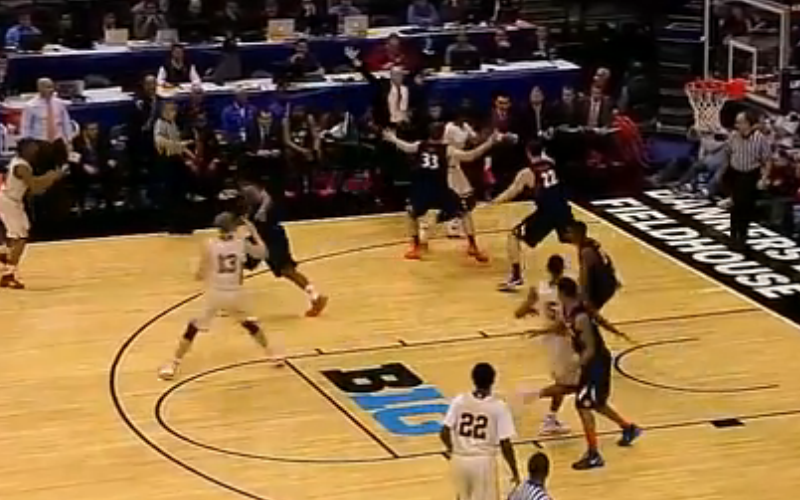 Vonleh struggled taking care of the ball during the regular season, averaging 3.2 turnovers per 40 minutes. Illinois knew that and forced him to make decisions with the ball in the post. Here, he does a nice job of staying patient, keeping his pivot foot and finding Yogi Ferrell open in the corner for the trey ball. 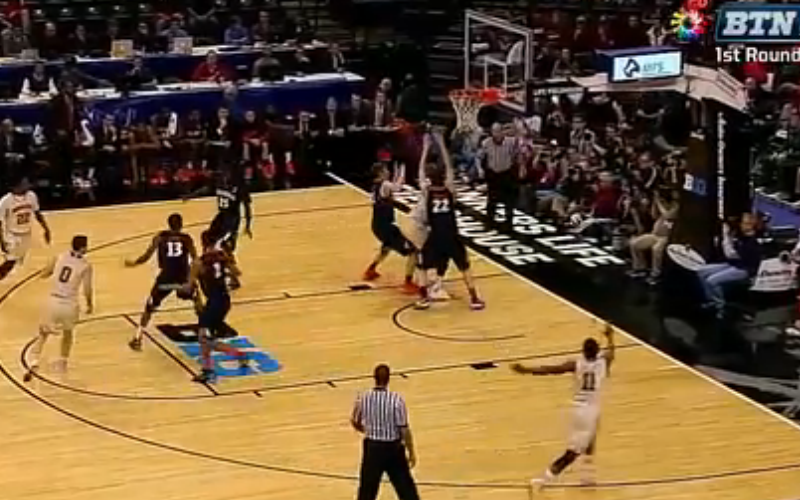 Eventually Indiana moved Vonleh out to the perimeter, where he could avoid double-teams. His best bucket of the game came late in the first half.

In the second half, Vonleh played mostly on the perimeter. He missed both of his long-range jumpers and couldn't finish on his drives; he made a few nice moves to the rim, but rushed himself once he got there. It's an issue that plagued Vonleh all season: He shot really poorly (59.3 percent) at the rim, per Hoop-Math, over 10 percent worse than his power forward counterparts, Julius Randle (70 percent) and Aaron Gordon (72 percent).

Vonleh's defensive awareness was also a problem at Indiana. Against Illinois, this continued. He goaltended two shots above the cylinder and gave up two easy buckets in transition. Look at how he floats to the perimeter, giving up a free lane. 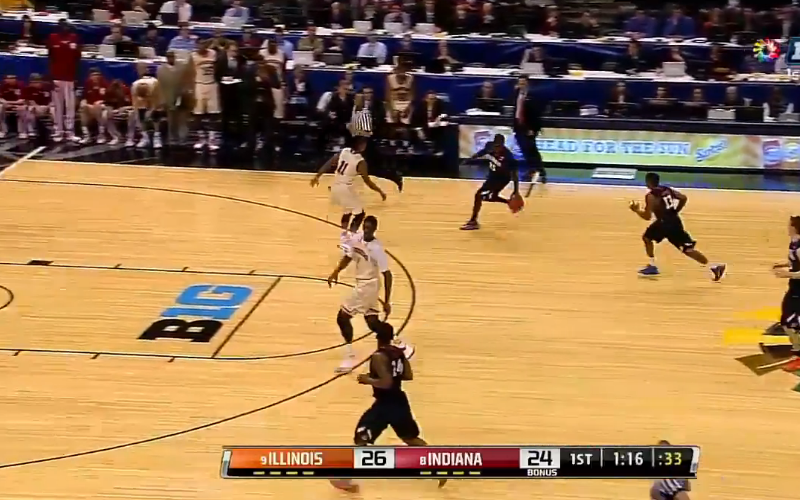 Vonleh should have planted himself in front of the rim. Instead, he floated to the perimeter, giving up a wide-open layup to Illinois guard Tracy Abrams. This happened twice in the first half. Here, he floats too far back on a pick-and-roll and gives up an easy shot at the rim: 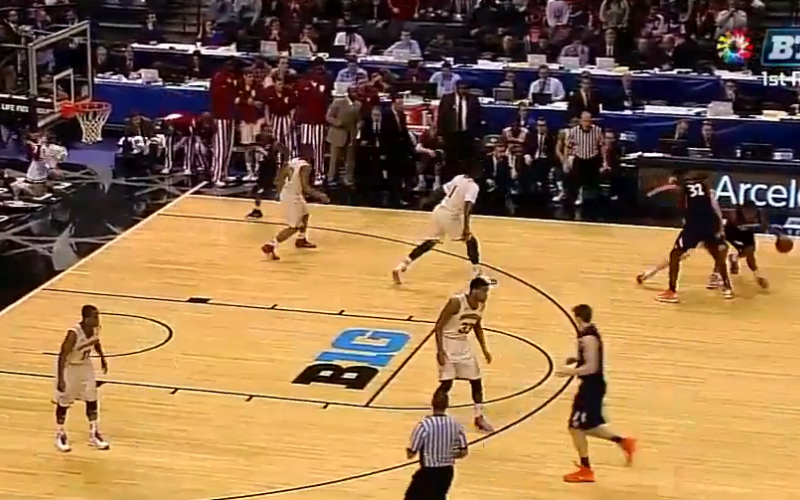 But he showed defensive potential, too. With just under eight minutes remaining, Vonleh switched out on Illinois guard Kendrick Nunn and cut off his driving path twice. When Nunn rose for a floater, Vonleh swatted it away then chased down the rebound.

He has the tools to be a forceful defender, but he has to use them consistently.

Somewhere in the middle: Michigan, Feb. 2

We got a little bit of everything from Vonleh in this game: Great rebounding, modest scoring, some impressive blocks, a few turnovers, some passiveness, etc. His two biggest baskets came in the final minute, sealing the upset win for Indiana. Both were tip-ins, the first an impressive dunk off a missed free throw:

Vonleh also flashed the ability to defend the perimeter. Michigan played with Glenn Robinson III, a nominal small forward, as its four man. Indiana countered by hiding Will Sheehey on Jordan Morgan, a non-threat on offense, and putting Vonleh on Robinson. The Indiana big man is quicker laterally than you would expect, and did a nice job of staying in front of Robinson on the drive. Robinson finished with just nine points on nine shots.

Vonleh's defensive versatility also gave Indiana the ability to switch on pick-and-rolls. He did a fine job of containing guard penetration several times.

But offense was a struggle for Vonleh for most of this game. Morgan is a stiff on offense, but he's a big body (6'8, 240 pounds) who can really use his size on defense. In the first half, Vonleh drove baseline on Morgan and tried to go to the rim, but couldn't outmuscle the big man and wildly threw the ball over the rim.

His issues with bringing the ball low also persisted. Why take a dribble here? 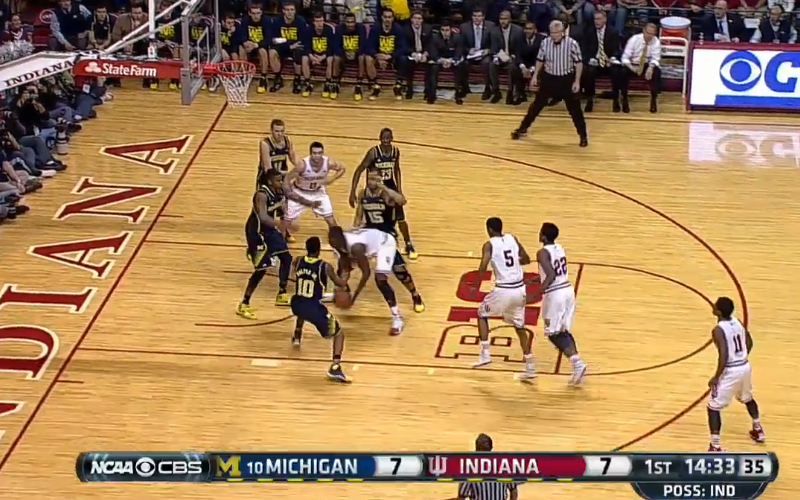 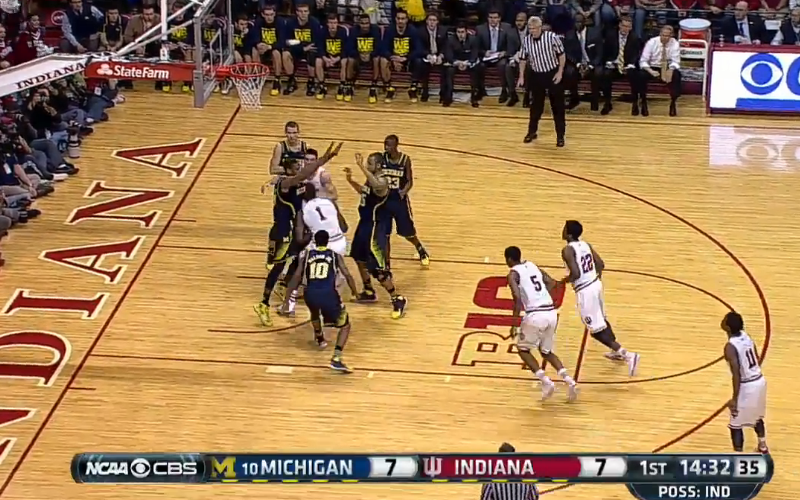 This resulted in a turnover after one of Michigan's players stripped the ball away. There's no reason for Vonleh to bring the ball down to his competition, but it's something he did constantly in his freshman season. This isn't a basketball stance: 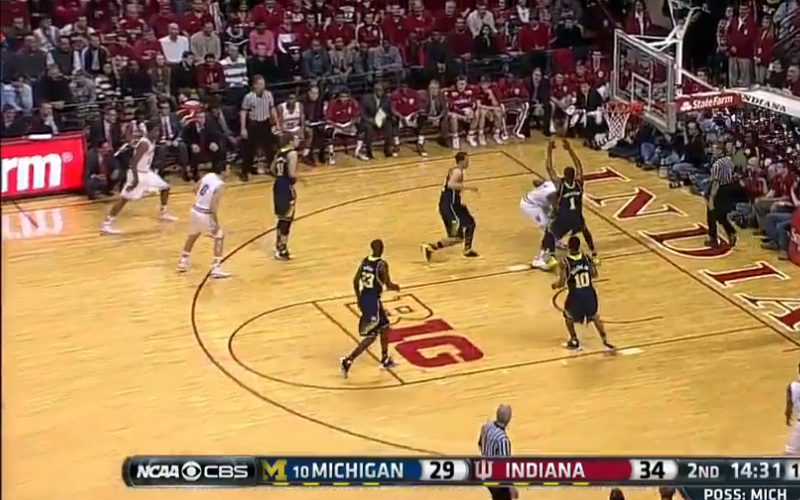 And again: He puts his head down, takes the dribble and it results in a turnover.

There's just too much room for error there. He also drifted for stretches in this game. Here, he doesn't even look to score, even though the rim is wide open: 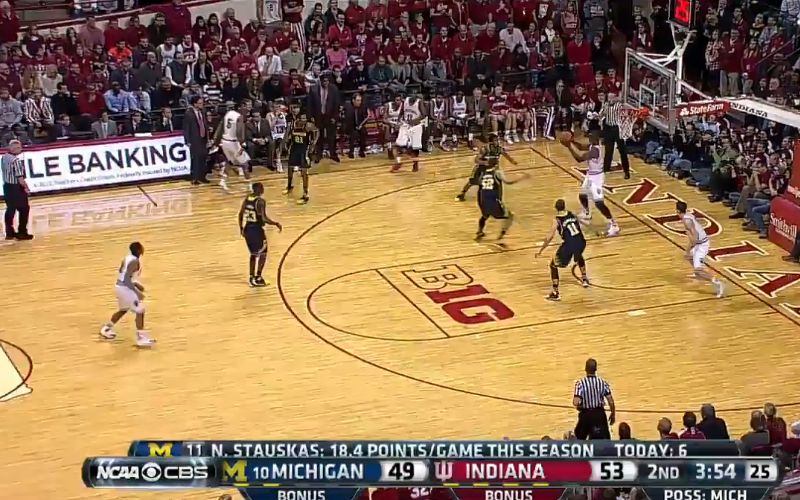 And here he passes out of his post move.

Vonleh has all the physical tools to play power forward in the NBA. He's long, athletic and coordinated. He also fits nicely with the NBA's movement towards floor-spacing bigs. Vonleh shot 48.5 percent from behind the arc and 71.6 percent from the line. He did, however, only shoot 33 three-pointers on the year and that small sample size worked to his favor.

But he needs a ton of work on both ends of floor. He's wildly inconsistent on defense, he needs to learn how to finish around the rim and he has to cut the turnovers. The potential is there because all of the tools are there; it'll just take years to mold him into that. Luckily, he was built with an impressive slab of clay.