LeBron James responds with a giant middle finger for the critics

After two days of criticism and cheap shots, LeBron James provided the perfect response in Game 2, right down to the pass that helped Miami tie the series.

Share All sharing options for: LeBron James responds with a giant middle finger for the critics

SAN ANTONIO -- If you were going to craft a perfect response for LeBron James based on the last 48 hours, it would look a lot like Game 2 of the NBA Finals. He was a dominant scorer with 35 points on 22 shots, doing work inside and out. He was the Heat's leading rebounder with 10 and he played a huge role defensively in stifling the Spurs in general and Tony Parker specifically in the fourth quarter.

Lots of great players have done similar things when questioned and ridiculed. What made this not just a statement game, but a LeBron statement game was the pass to Chris Bosh in the final minutes that gave the Heat the lead and allowed them to even the series at a game apiece.

James had made almost all the scoring plays to get Miami to this point, but down by one with a minute to play he drove the lane, drew the usual crowd of defenders and kicked it to Bosh for a wide open three. This was the exact same situation that drew scorn and derision in Indiana when Bosh missed. In fact, Bosh had missed another three on the previous possession.

In hindsight, these fans should have left their poster boards at home.

How Miami evened the series

Five takeaways from Sunday's game, including the brilliance of LeBron James and an uncharacteristic fourth quarter by the Spurs.

No matter. LeBron is hard-wired to make the right basketball play at the right time and that's exactly what he did again. This time Bosh drilled the shot and the Heat escaped south Texas with a 98-96 win and a split.

"It's the theater of the absurd when you're dealing with what plays he makes at the end of the game," Erik Spoelstra said. "He makes the right basketball play. We trust him to make the right plays."

It was, in a sense, a giant middle finger waved defiantly at the outside world. For all his ability, and all his accomplishments, LeBron has never wavered in his belief that situations and tactics dictate his game far more that whatever criticism he takes. "When the ball is in my hands," James said, "I'm going to make the right play."

"He's the most unselfish player I've ever played with," Bosh said. "And especially with the talent he has playing the game, the way he plays the game. He doesn't, you know, try to force anything. Even if he's hot he'll still hit you if you're wide open. And that's what makes this team special because your best player is willing to sacrifice a shot, a good shot, for a great shot. You have to commend him for that."

You'd think so, but we all know better. It's beyond the point of parody and not really worth the angst that's been vented over the few days. The only appropriate response was the one James delivered.

"For me, once I get into a good groove, I feel like everything is going to go in," James said.

So did the Spurs. So did everyone else in the building. He was taking the shots that the Spurs wanted him to take, that any opponent would be thrilled with him taking, and he knocked them down. 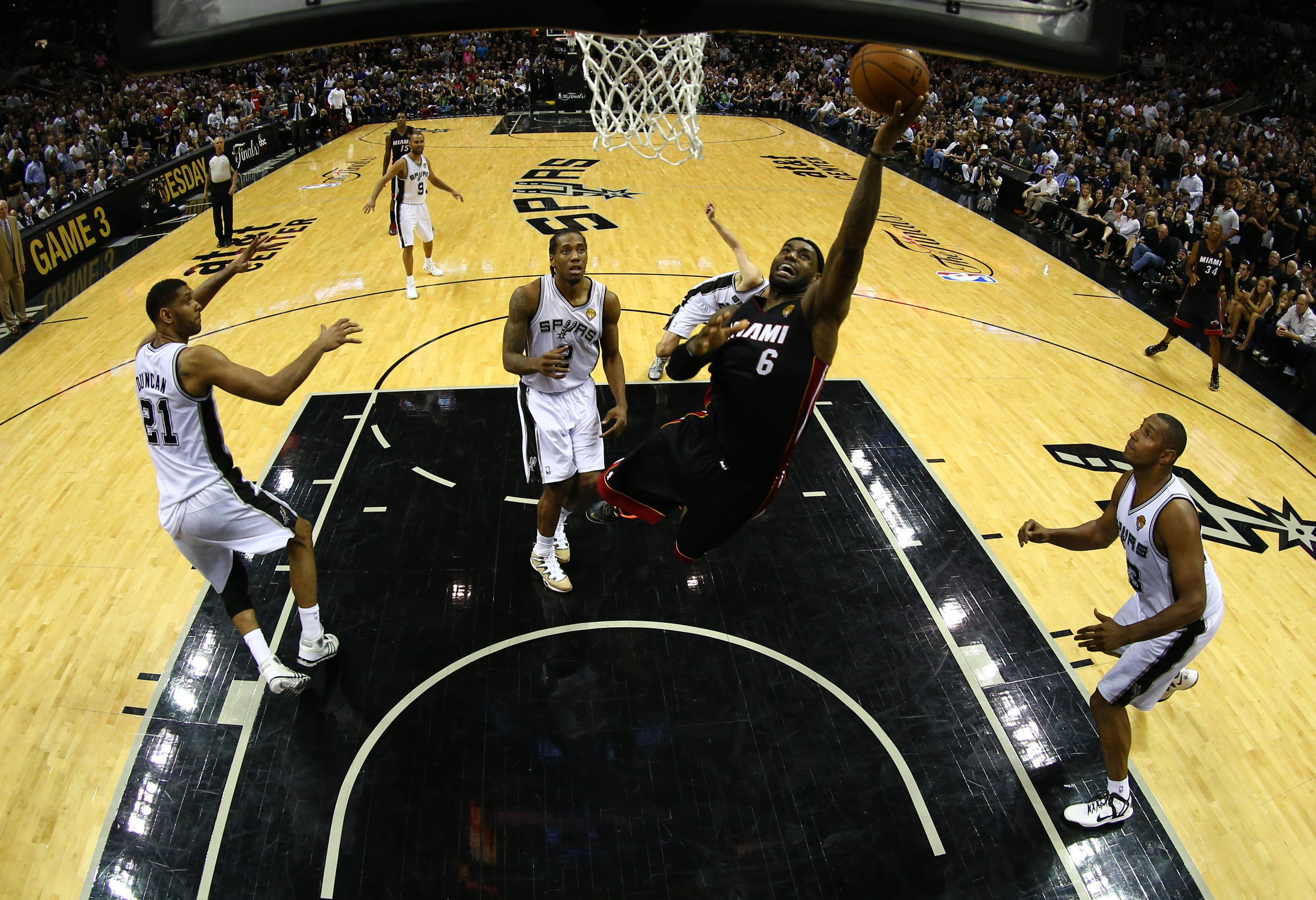 "This was on LeBron and he came through like he has so many other times." (Photo: Andy Lyons-USA TODAY Sports)

"Look, he's the best player in the game," Spoelstra said. "Does that mean he's going to (score 35)? You don't know. He has an incredible way to put his fingerprints on a game in a lot of different ways."

There were moments within in the game that will get lost in the rush to overanalyze the last few minutes. Like early in the second quarter when the Spurs built an 11-point lead. James came back in, dished to Wade for a layup and got two quick baskets on offensive rebounds to draw within two points.

Or in the third quarter when the game became a form of basketball art. Down six, LeBron went on an 8-0 run in the span of 51 seconds, and then hit two more step-back jumpers after a timeout. That quarter was as good as it gets anywhere in the sport. The teams combined for 69 points with only two turnovers between them and within that elevated realm, James was so clearly superior to everyone else on the court that it was almost unfair.

This was not a classic ball movement game for the Heat. They had only 16 assists on 37 makes and no one had more than three. This was on LeBron and he came through like he has so many other times. He swears that the outside noise doesn't bother him, which frankly doesn't ring true. But what makes LeBron so good and so dangerous is that he is able to channel his game while sticking to his principles.

"Well, you can double him if you want," Gregg Popovich said. "He's a pretty good player. I'm going to guess that he's going to find the open man."

Pop HATES threes and other notes

A long two-day break between Finals games revealed a lot about the two teams competing for a championship, from Gregg Popovich's odd adaptability to the reason for Boris Diaw's resurgence.

On cramps and inevitable backlash

The Spurs' impressive Game 1 victory was overshadowed by a faulty cooling system that forced LeBron James out of the game during crunch time. Let's all try to react rationally.

Pop HATES threes and other notes On cramps and inevitable backlash

The Spurs, well, the Spurs had regrets. They could have very easily walked away with a commanding 2-0 series lead, but down the stretch they missed four huge free throws and couldn't get anything going from the outside. The shots that came within the rhythm and flow of the game were now contested and forced.

"It's how we have to score," Popovich said. "We can't put it in somebody's hands and have them create everything for us. It's got to be a group effort and we didn't do that. That puts a lot of pressure on everything else. It means we're going to have to be perfect on defense, we can't miss four free throws in a row, those sorts of things. You move it or you die."

The Spurs died on Sunday and now we have the series we expected to have from the beginning. Just as San Antonio could be up 2-0, the Heat could have stolen Game 1 if not for a whole host of factors, including the faulty air conditioning.

As the series shifts to Miami, everything is up for grabs and the sense is that the series is only now beginning. Both teams are trying to get a handle on lineup combinations and coverages. Both teams will adjust subtly and significantly as the series moves along. That's what we wanted and that's what we have.

The nonsense of the last few days has mercifully abated thanks to a brilliant LeBron performance. He gave the series some of its dignity back. It's what he does, better than anyone else playing the game, and it was exactly the response that we've come to expect from him.