Donald Sterling changed his mind, will basically sue himself on principle

According to his lawyer, the soon-to-be former Clippers owners will pursue his lawsuit against the NBA after all.

Share All sharing options for: Donald Sterling changed his mind, will basically sue himself on principle

Donald Sterling, who has been banned by the NBA and fined $2.5 million, has changed his mind and will proceed with a lawsuit against his wife, Shelly Sterling, and the league, his attorney told the media on Monday. Sterling had previously threatened to sue the league and his wife to prevent the sale of the Clippers to former Microsoft CEO Steve Ballmer.

Sterling and the Clippers

Last week, Sterling announced he would not pursue the lawsuit, clearing the way for the sale of the club. Had he done so, he would have walked away with loads of cash and notoriety. But on Monday, Sterling's lawyer, Max Blecher, announced that the suit would go "full steam ahead."

Why? Apparently, a Monday leak showing that Shelly Sterling may still have a small role in the Clippers organization while Donald Sterling remains banned for life has rubbed the outgoing owner the wrong way. There's also the matter of personal animus.

So basically, in the end, Donald Sterling is choosing to sue himself on principle. Good show, buddy.

UPDATE: Sterling released a statement. Ramona Shelburne was kind enough to share it on Twitter. Here the whole thing is in a digestable macro. 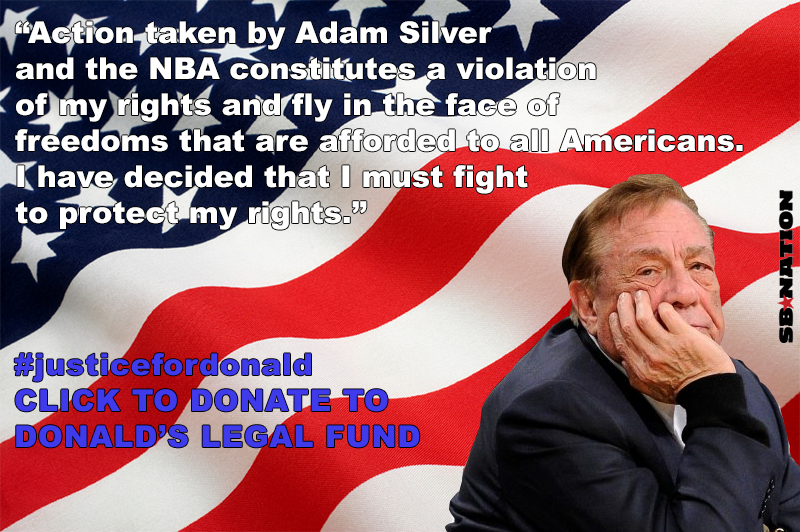