LeBron James will return to the Cleveland Cavaliers

In a stunning turn of events, the best player in the world is going back to where he began his NBA career, spurning the Miami Heat despite four straight Finals appearances.

Share All sharing options for: LeBron James will return to the Cleveland Cavaliers

A scenario that seemed unlikely several weeks ago is now coming true: LeBron James will leave the Miami Heat and return home to Cleveland, signing a maximum deal with the Cavaliers, he announced on Sports Illustrated.

"I always believed that I’d return to Cleveland and finish my career there," James told Lee Jenkins of SI. "I just didn’t know when. After the season, free agency wasn’t even a thought. But I have two boys and my wife, Savannah, is pregnant with a girl. I started thinking about what it would be like to raise my family in my hometown. I looked at other teams, but I wasn’t going to leave Miami for anywhere except Cleveland. The more time passed, the more it felt right. This is what makes me happy."

Even if it doesn't mean the easiest path to a championship, the return of the King means a young roster has the best leader it could ever hope for.

It was just a normal Friday long lunch break in Cleveland. And then they heard the news.

The move culminates days of uncertainty that included many rumors, several meetings between James' agent and different teams and both the Cavaliers and Heat making significant free-agent decisions anticipating James' return. In the end, though, the lure of his hometown and the promise of playing with a younger, up-and-coming team dwarfed a potential return to the place where he won his first two championships.

James will return to Cleveland despite making four straight Finals appearances with Miami, including two championships. He will reunite with Dan Gilbert, who famously scorned James in a hand-written later after he left Cleveland for Miami in 2010 in a televised special. Good fortune, a series of cap-clearing moves and the Heat's woeful exit to the Spurs in the Finals put Cleveland back in the picture for James after a disappointing 33-49 season.

"I’m not promising a championship," James writes in SI. "I know how hard that is to deliver. We’re not ready right now. No way. Of course, I want to win next year, but I’m realistic. It will be a long process, much longer than it was in 2010. My patience will get tested. I know that. I’m going into a situation with a young team and a new coach. I will be the old head. But I get a thrill out of bringing a group together and helping them reach a place they didn’t know they could go. I see myself as a mentor now and I’m excited to lead some of these talented young guys. I think I can help Kyrie Irving become one of the best point guards in our league. I think I can help elevate Tristan Thompson and Dion Waiters. And I can’t wait to reunite with Anderson Varejao, one of my favorite teammates."

Most people expected the Big Three to remain intact despite getting beat down by the San Antonio Spurs in the NBA Finals, with early rumors suggesting that they all would take less and Carmelo Anthony would join them in South Beach. But once James and his two running mates opted out of their contracts, speculation began to run rampant that perhaps a breakup was coming. The talk of James taking less money died down, as it became clear he wanted a max salary in the first year of his next deal. 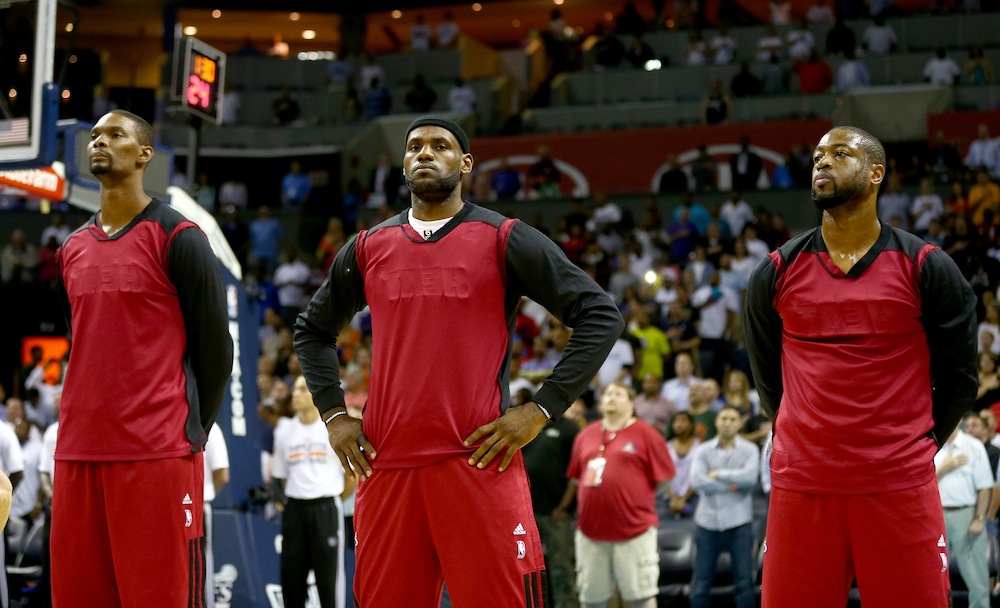 James' agent, Rich Paul, began taking meetings with other teams, including the Cleveland Cavaliers, Houston Rockets, Phoenix Suns and Dallas Mavericks. The Los Angeles Lakers also scrambled to get into the mix.

But soon, with the uncertainty surrounding James' future rising, momentum began to build toward a possible return to Cleveland. The Cavs made it clear they would go after James in free agency, but never mind the obsessive flight record tracking of owner Dan Gilbert's plane, nor the team website's timely removal of the owner's letter following James' decision in 2010 (that was later revealed to be coincidence). The Cavs first opened up enough cap space to sign James by moving Jarrett Jack, Tyler Zeller and Sergey Karasev away in a three-team deal with Boston and Brooklyn. Immediately after the deal, Cleveland was linked to free agents and former teammates of James, including Mike Miller, Ray Allen and James Jones. As those rumors swirled, Bosh received a max contract offer from the Rockets, which then led to more talk about Anthony possibly going to Miami.

With maturation, the Cavs look promising

Becoming a contender requires internal growth, but on paper the outlook for the Cleveland Cavaliers is promising.

Don't bet against Pat Riley and his Heat

As long as Pat Riley is around, the Heat are not to be taken lightly, even without LeBron James.

With maturation, the Cavs look promising Don't bet against Pat Riley and his Heat

Pat Riley met with James and Paul in Las Vegas on Wednesday in what now clearly seems like a last-ditch attempt to convince James to stay in Miami, but James left without a commitment and said he'd take time to talk it over with his family.

James may have been bested by Kevin Durant for the MVP award last season, but the four-time MVP remains the gold standard in the NBA. James averaged 27.1 points, 6.9 rebounds and 6.4 assists last year while also improving his field-goal percentage for the seventh straight season.

James did slip a bit on the defensive end, although that may have been more a function of him conserving energy throughout the year. When he put his mind to it, James remained one of the more dominant forces on the defensive side of the ball.

James led the Heat to a fourth consecutive NBA Finals appearance, but they ultimately proved to be no match for San Antonio. James himself played well in the Finals, averaging 28.2 points on 57.1 percent shooting, but it was nowhere near enough against the Spurs' juggernaut. Miami pushed for a reload this summer but it wasn't as easy as expected with free agent targets such as Kyle Lowry and Marcin Gortat being re-signed by their current clubs.

James returns to a Cavs team that is in better shape talent wise than when he made the fateful Decision in 2010. Kyrie Irving is a blossoming star, and there are numerous high draft picks on the roster, including another No. 1 pick in rookie Andrew Wiggins. With quality young talent around James, Cleveland has a chance to return to prominence.

Cleveland may also attempt to re-engage the Minnesota Timberwolves in trade talks surrounding Kevin Love, with Wiggins as possible bait. Love made it clear he would not re-sign in Cleveland prior to the draft, but that was before it landed James.