Should the Cavaliers ditch Andrew Wiggins to get Kevin Love?

The Cavaliers landed LeBron James, but is another huge move in line for Cleveland?

Share All sharing options for: Should the Cavaliers ditch Andrew Wiggins to get Kevin Love?

In what is undoubtedly the most important letter of the NBA offseason so far, LeBron James explained his decision to leave the Miami Heat and return to his first NBA home in Northeast Ohio. He then went on to discuss the challenge in leading the new Cavaliers squad he'll be joining, with Anderson Varejao, Tristan Thompson, Dion Waiters and Kyrie Irving all mentioned directly. Strangely absent? Andrew Wiggins, the No. 1 pick of the 2014 NBA Draft:

I'm going into a situation with a young team and a new coach. I will be the old head. But I get a thrill out of bringing a group together and helping them reach a place they didn't know they could go. I see myself as a mentor now and I'm excited to lead some of these talented young guys. I think I can help Kyrie Irving become one of the best point guards in our league. I think I can help elevate Tristan Thompson and Dion Waiters. And I can't wait to reunite with Anderson Varejao, one of my favorite teammates.

This could be an accident or a strategic snub of the rookie who hasn't proven anything yet. It could be a case of finding significance in a place it doesn't belong. But it could also be a sign that Cleveland is not yet done shaking things up.

Could the LeBron signing pave way for the Cavaliers to add another star? According to a report, Kevin Love is "intrigued" by the idea of heading to Cleveland.

Cavs intend to keep Wiggins, even with Love talks

With Kevin Love more open to commit long term to Cleveland thanks to LeBron's return, a trade could happen. But a report says Cleveland would not be open to including Andrew Wiggins in the deal.

Love 'intrigued' by Cavaliers after LeBron signing Cavs intend to keep Wiggins, even with Love talks

There's reason to believe the Cavaliers are interested in making another major adjustment to their roster, this time by trading for Minnesota Timberwolves superstar power forward Kevin Love. Cleveland can now push full speed ahead with a commitment from James, although Love wouldn't come cheap. Wiggins will likely be the centerpiece in trade for Love, according to CBS Sports' Ken Berger.

Should Cleveland deal Wiggins for Love if such a trade is indeed on the table, or is a future with Wiggins worth sitting tight? Love represents a significant upgrade in contention-ready talent for the Cavaliers, and would give James a running mate who could help the team win immediately.

But the price to pay is steep if it costs Wiggins, who has long been projected as a franchise-changing talent. Wiggins also provides financial flexibility, playing on a cap-friendly rookie contract. Should the Cavaliers hit the brakes before trading the top pick in a very strong draft, or is a future with a Big Two of Kevin Love and LeBron James -- along with the talents of Kyrie Irving and the rest of Cleveland's young core -- a better option?

Trading for Kevin Love is a win now, and later, move

There's no question that Cleveland is interested in Love, a player who averaged 26.1 points and 12.5 rebounds per game last season. There's also no question Love is ready to reach the playoffs for the first time in his career. And it seems that the Timberwolves have reconciled themselves to trading their best player before he becomes an unrestricted free agent next summer, as they've been entertaining offers for Love through the offseason.

There's no way to project how Wiggins' development will pan out, or how long it will take for him to become the player he will be. The Cavaliers could have a known superstar commodity in Love to pair with a two-time champion. Even with LeBron, Cleveland's roster is filled with more question marks than answers. Adding Love to that mix would seem to guarantee that the Cavaliers will be a significant force in the Eastern Conference for years.

The front office struggled to find a winning combination of players to put around him during James' first stint with Cleveland. Adding Love would offer a solution to that problem before James even played another game with the Cavs. And yet. 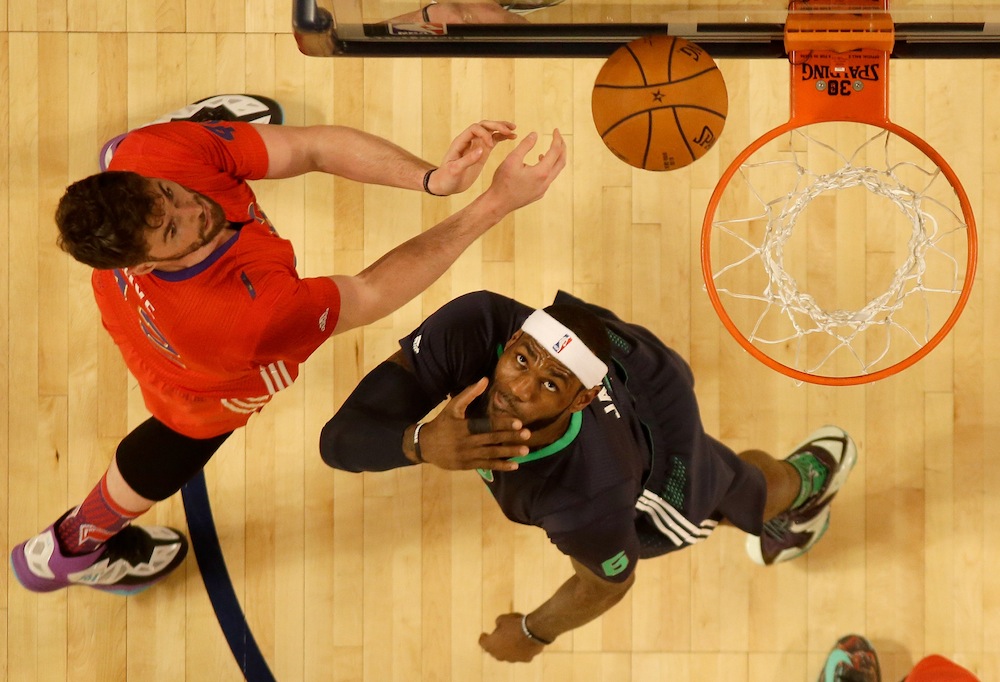 Letting go of a player like Wiggins is a tough decision to make, though. Playing with and learning from James could be the perfect environment for Wiggins to grow into a superstar. He's still one of the most intriguing and talented prospects to join the NBA in years, and could be the next franchise player for Cleveland once James moves on down the road.

learning from James could be the perfect environment for Wiggins to grow into a superstar.

He doesn't provide a known skill set or locked-in production in the way that Love does, but the potential for Wiggins is huge. He should make an impact on defense from his first game, and could be a complementary player next to James. It could take a few years for him to become the player Cleveland will need him to be, but that's true of all young players. And there's no telling what Wiggins' ceiling may be once he taps into his potential.

The type of player Wiggins can become, along with the financial flexibility he helps Cleveland maintain, could be a huge building block for the new LeBron James era in Cleveland. If the Cavaliers and James can stay patient, waiting for Wiggins to blossom might be the best move possible.

James not mentioning Wiggins anywhere, despite listing much of the rest of the roster, is a glaring omission. Dan Gilbert and James clearly discussed what comes next for the roster, and there's no way the No. 1 pick didn't come up in the conversation. It's unlikely Minnesota will find a better potential return for Love than Wiggins if they do eventually make a move, which is exactly why Cleveland might balk at including him in a deal.

Still, Love is already legitimate NBA superstar. He may struggle on defense, but he's the total package on offense and is a rebounding demon. Wiggins may have an extremely high ceiling, but there's no guarantee he ever reaches it, let alone becomes a better NBA player than Love. If Love is available, it could be too much for the Cavaliers to resist.

For that reason, I'll give the likelihood this rumor pans out a 7 out of 10. Landing Love would be huge for the Cavaliers, even at the cost of Wiggins.