Dante Exum is trying to put it all together

The Australian guard has been turning heads at summer league with his freakish athletic ability, but he has work to do to compete every night in the NBA.

Share All sharing options for: Dante Exum is trying to put it all together

LAS VEGAS -- The Utah Jazz were warming up to play the Milwaukee Bucks in a game that would feature several top picks, including Dante Exum, the Australian mystery who most fans are seeing for the first time. The matchup was already creating a stir.

It's true. Looking at Exum -- all 6'6 of him -- it's mystifying to know he projects as a point guard. He's nearly as tall as his teammate Rodney Hood, a prototypical-sized, 6'8 wing. Exum has incredibly long arms (6'9.5 wingspan) and he's wiry thin, but muscular in stature. The equally freakish Antetokounmpo guarded Exum to start the game.

"Giannis, you can't guard Exum!" yelled one Jazz fan. He was right. Exum initiated a pick-and-roll with his left hand and blew past the Greek Freak on his way to the basket. Antetokounmpo was forced to foul Exum hard from behind at the rim, disrupting the finish, and sending Exum to the line.

"He's one of the fastest guys I've ever seen at that size," Hood said.

The Duke product and fellow Utah first-rounder benefited from Exum's ability to get in the paint. Hood scored 29 points and found open shot after open shot thanks to Exum's dribble-penetration.

"It helps me," Hood said. "Him getting into the lane and being able to pass the ball and he's a really good passer, as well. He can score; I mean he's just ultra quick." 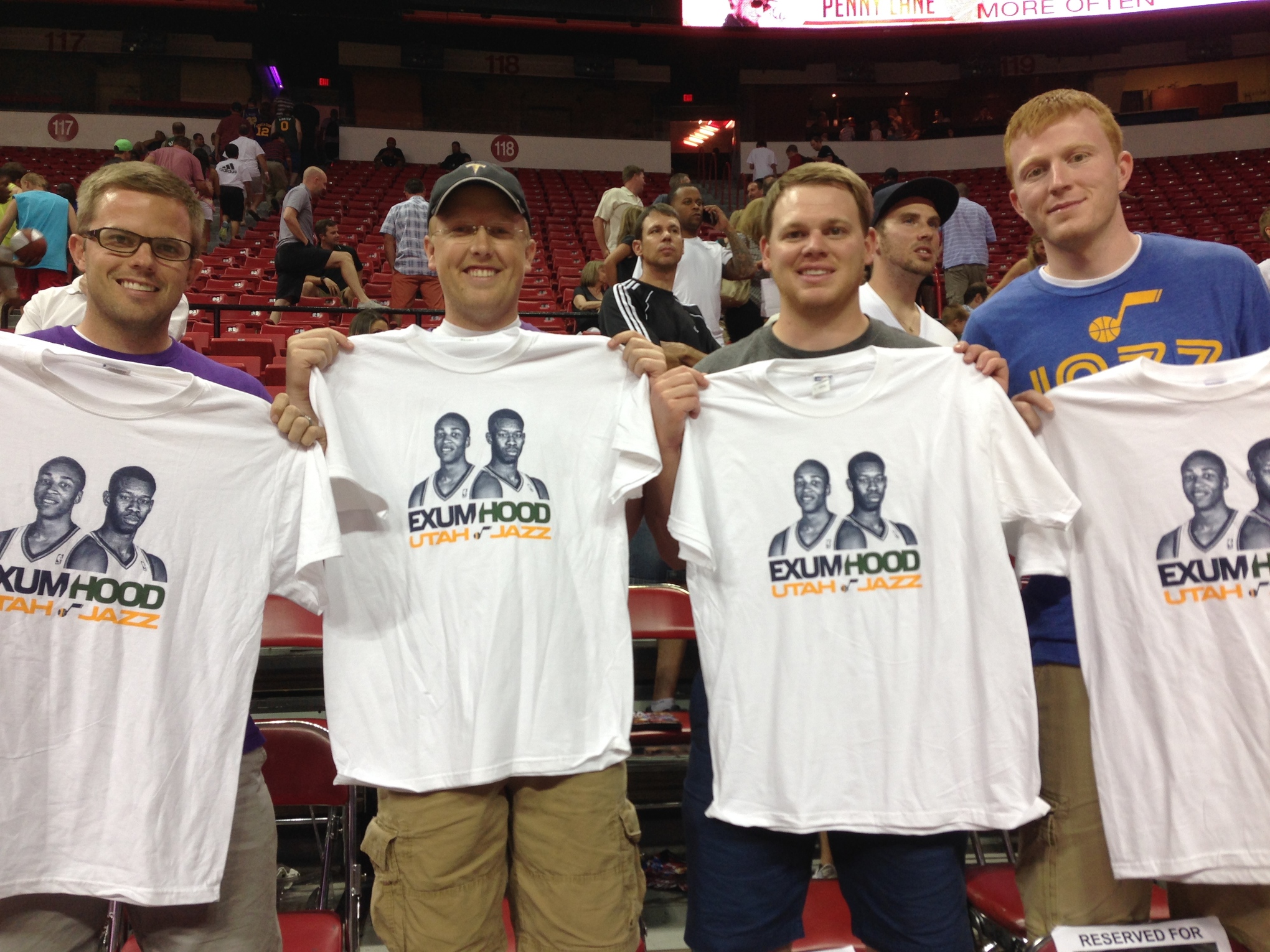 New Bucks coach Jason Kidd was in attendance to watch his own young players, Antetokounmpo and second overall pick Jabari Parker. But it was the coach's first time seeing Exum play live, and he walked away impressed with the young Jazz guard. "You know he understands how to play the game," Kidd said. "He's going to fit in their system."

Yet, through the first three summer league games Exum has put up only modest numbers. He's averaging just 7.3 points, 3.0 assists and 2.7 rebounds per game on 40 percent shooting. He's also only playing 25 minutes a night and has battled fatigue.

Against the Denver Nuggets on Tuesday, Exum played just 18 minutes and didn't see the floor in the fourth quarter. He said he was feeling both dehydrated and lightheaded. His ability is obvious, but he's working on being professional.

"I got my first taste of it tonight where I wasn't prepared in my nutrition heading into the game," Exum said. "So I think just learning from this mistake and coming to the next game prepared."

His ability is obvious, but he's working on being professional.

Exum turned 19 on Sunday, and it shows. He smiles gleefully in layup lines and playfully fights for offensive rebounds with his teammates in warmups. His new Jazz coaches pull him aside on almost every timeout, feeding him information. Utah head coach Quinn Snyder agreed that it'll take time for Exum to be prepared to compete every night in the NBA.

"I learned tonight that he's tired," Snyder said. "I think he's lost a little of his will to attack. I think he's got a real hunger to be a player. I think there's a cerebral component to his approach that I think will help him. There's times when you just see how young he is. As he gets in better shape, gets stronger, it'll be best for the team."

Against the Nuggets, he found himself a step behind on both ends of the floor. On one defensive possession, he closed out too hard against Gary Harris in the corner, leading to an open baseline. Moments later he got caught behind a Tim Ohlbrecht pin-down screen and gave up an open jumper to Harris. He turned the ball over four times on offense, despite playing limited minutes.

"It has been an adjustment [but] not too much of an adjustment," Exum said. "Basketball is basketball wherever you go. It's just kind of the different styles of play and the physicality. It's just about slowing down and looking for the best option, rather than try to play fast paced all the time."

Exum had his moments against the Nuggets, just as he's had small flashes of brilliance through each of his first three summer league games. His most impressive play came right after turned the ball over on a pick-and-roll. Exum sprinted all the way back in transition and absolutely swallowed a Denver dunk attempt at the rim. Few guards in the NBA have the length, speed and wherewithal to make that type of play, but Exum looked like he could have done it in house slippers.

Top picks Andrew Wiggins and Parker are also just 19 years old, but they both played a full year of college ball in elite basketball conferences to prepare for the NBA. Exum spent the last year preparing for this moment in empty gyms. His last organized game before summer league was against Australian high school kids. It's going to take time for him to adjust, but he has the physical ability to be well worth the wait.