How to make Andrew Wiggins a star

The 19-year-old forward has immense talent, but there are some obvious holes in his game.

Share All sharing options for: How to make Andrew Wiggins a star

LAS VEGAS -- Summer League is a time of wild optimism and dramatic overreactions, the perfect cauldron of our modern basketball over-analysis. In that spirit, I'm going to tell the Cleveland Cavaliers how they should begin developing rookie Andrew Wiggins, or at least what I would work on with the rookie phenom.

I don't mean to be presumptuous and I'm not trying to second-guess the coaches that Wiggins has worked with on his journey to the NBA. I'm just a simple Canadian kid giving an extraordinary Canadian kid some practical advice on what basketball skills to work on and develop.

Before we get our imaginary workout going, it helps to establish that Wiggins has other-worldly explosive athleticism, a high skill level and an apparent love of the game. In other words, this isn't exactly a blank slate. He's perhaps a perfect student. However, there are a few aspects of Wiggins' game that will need immediate and continuous improvement for him to become an All-Star.

And then he followed it with a big block on Nerlens Noel, no less.

Anthony Bennett is learning to have fun again

Last year's No. 1 pick is coming off a lost season. The journey toward recovering from that huge setback begins with a simple key.

One of the first things you notice watching Wiggins up close in Vegas is that he plays far too straight up, both offensively and defensively. That may sound odd to say about an incredible athlete, but he's often not in an athletic basketball position: sitting down, bending with his knees, back straight and balanced. This is the ready position that makes players quicker and more explosive.

At Summer League and going forward into the regular season, Wiggins will not be a primary ball handler initiating offense.  He's going to be playing out of the corner and off the wing, coming off of baseline screens in new Cavaliers coach David Blatt's offense. This is an area he must improve in. He is easily dislodged and shoots through picks too loosely and upright. Some of this will be overcome through increased strength and conditioning work and his own physical maturation, but Wiggins also needs drilling on his footwork and technique.

That's why I'd have Wiggins making runs from the center of the court to the corner while establishing a ready position to catch the ball and shoot in my drills. When he doesn't receive the ball right away, we are going to practice setting his footwork to prepare for those down screens. I'll emphasize the need to establish a lower body position and come hard off the screener's shoulder and hip. We'll work on getting his feet before the ball gets there and then catch and shoot. The next time around, he'll curl hard, catch and shoot. Finally, we'll have him cut, curl and then get back to the corner for a catch and shoot 3.

All of these drills will be happening with one or two screeners, a trailing coach on defense and another coach beating on Andrew with MMA pads to improve his strength. We'll tell him to go hard the whole time. Then, we'll tell him that again.

For such an exciting player who seems to get to the rim at will, Wiggins also needs to put in a lot of hard work on his ball handling. His dribbling is often lackadaisical and not sharp, especially when running pick and roll. Again, he is upright and rigid. 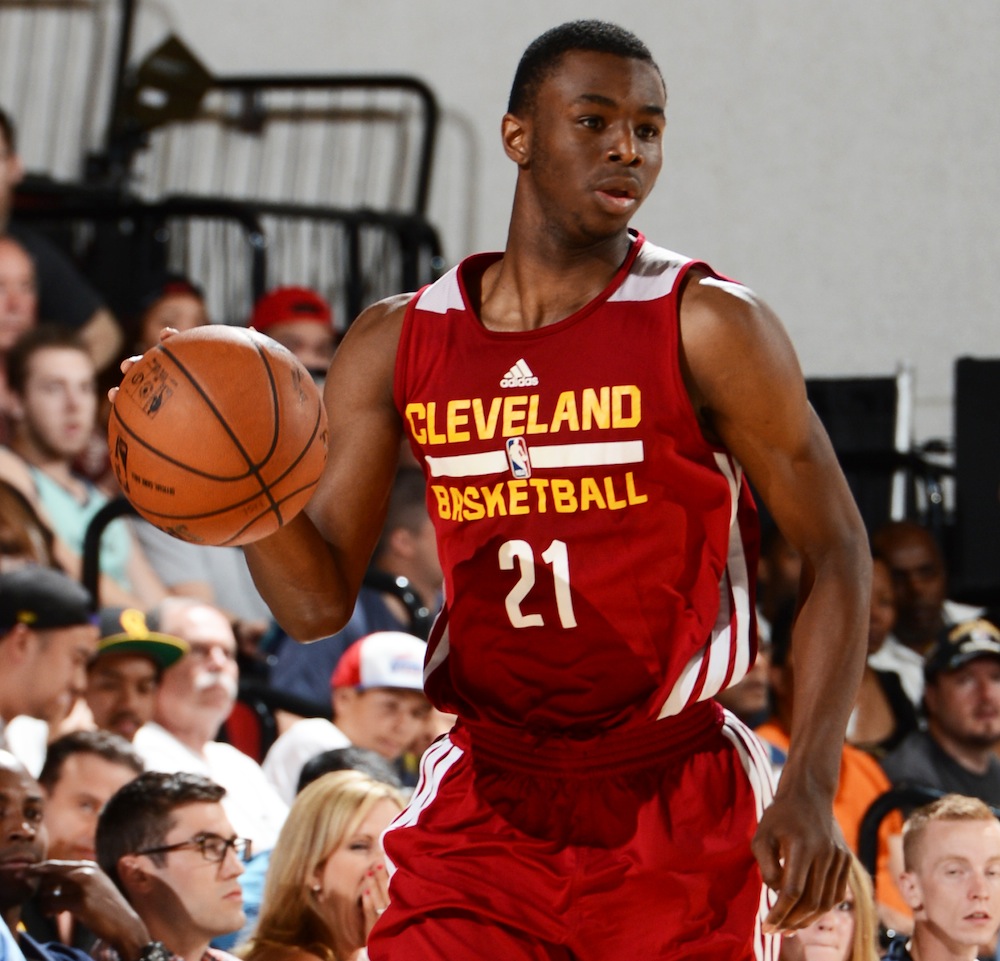 Because of this, we will also include drills that involve both big-picture open-court moves -- speed dribbling, change of pace, around the back, between the legs, crossover -- and dribbling technique in tight spaces. We'll make him sweat handling the ball in the key, working on quick low dribbles while using his ass and legs to protect the ball. It also means we'll get the little orange traffic cones out to simulate both defenders and pick and roll situations.

In scouting him, I've also noticed that he's always going right when he catches and attacks the rim. Going right is often a prelude to spinning back from right to left, which is his signature move. The next step is improving his ability to go left, whether off of the catch, a jab step and crossover or off the dribble.

During the workout, we'll make sure he spends some slow time jump stopping, front and reverse pivoting and then learning to economically jab step, cross over and seal his defender. These are textbook John Wooden perimeter footwork drills. We'll combine this with finishing at the rim with both hands and off either foot (no dunks for now) and pull-up jumpers. Yes, mid-range jumpers, the bane of modern NBA analytics. Keep in mind that the best NBA shots are ones that you can make consistently from any distance.

there are a few aspects of Wiggins' game that will need immediate and continuous improvement for him to become an All-Star.

That all said, his jump shooting is already solid. Wiggins displays good feet, proper balance and a smooth release both off the catch and dribble. He also already has deep range. Still, as in any workout I do, there will be a large dose of shooting. Like any potentially elite shooter, Wiggins needs reps.

One of the best ways to do this is to combine the pleasurable shooting experience with working on something that isn't as fun, such as individual defensive techniques. For example, I might make Wiggins defend the opposite side from the corner to the wing and then slide to the nail to be in proper help position, all while emphasizing staying low with proper footwork. We'd then tell him to slide back to the wing and corner hard, and only at that point would we hit him with a pass in those same spots for jumpers

Like all rookies, young players and James Harden, Wiggins ball-watches when he's on the opposite side of the ball on defense. He is not active enough sliding down to the nail and helping in a "2.9" position, and he's also slow to "sink" to the rim or low post when his team is put into a help-and-recover situation. Fortunately for Cleveland, he can make up for this defensive faux pas with amazing closing speed and length.

These defensive lapses will be overcome through experience and actual practice and game time. A fair helping of individual video study will also round Wiggins into an elite wing defender, someone who could potentially be Scottie Pippen 2.0.

It seems like a lot, but Wiggins has incredible physical tools and a willingness to work. He just needs to fine tune his fundamentals to reach his full potential, whether in Cleveland or elsewhere.

Once it's over, this will be my message to him:

Alright, Andrew, thanks for coming to Vancouver. Good workout. We'll mix it up tomorrow and everything we do will be game sped and will involve some simulation of a game situation. Go hard for 48 minutes. Canada's Olympic gold medals in 2020 and 2024 are resting on your continual improvement and dedication, so no pressure.