Love won't fix Cleveland's biggest issue, which is why the Cavs shouldn't trade Wiggins for him.

LeBron James waited 11 days to make a decision in free agency, but it felt so much longer because of the way it seemed to place the entire league in an unofficial moratorium. The earliest days of July are typically when the most player movement happens, but because so many teams and players were directly or indirectly tied to whatever James decided, the frenzied activity normally reserved for the start of free agency was replaced by white noise.

James' decision was always going to cause a domino effect around the league, and that's exactly what happened. Of our top-20 free agents, only six had decided before James. A week later, just two remain available. There's still one big domino left to fall this offseason, though, and even if he's not a free agent he's still tied to James' decision. That would be Kevin Love, the star power forward who has made it abundantly clear he won't be re-signing with the Timberwolves a year from now.

The Cavaliers have reportedly relented and are now open to trading the No. 1 pick for the Timberwolves' star forward.

Speculation over the possibility of the Cavs acquiring Love started the second James made his decision. This is not hyperbole: By omitting Andrew Wiggins' name from his thoughtful letter in Sports Illustrated announcing his return to Cleveland, James inadvertently started the league's biggest rumor.

What a rumor it is. On one end sits Love, a 25-year-old who just averaged 26.1 points and 12.5 rebounds per game while finishing with the league's third best PER. On the other side sits Wiggins, a prodigious 19-year-old just drafted No. 1 overall out of Kansas. NBA fans love speculating over trades, and this hypothetical is about as juicy as they come. Everyone has an opinion on whether the Cavs should trade Wiggins for Love, and it's hard to say either side is definitely right or wrong. It's peak NBA speculation, and it's oddly beautiful.

The pro-trade argument is so easy to make. LeBron turns 30 this season and the East is eminently winnable. Pairing him with one of the league's 10 best players in Love would make Cleveland the odds-on favorites in the East. Love's shooting would act as the perfect floor spacer for James' drive-and-kick ability. For as good as Wiggins might someday be, it's hard to imagine him putting up 26 and 12 at any point of his career.

It's a tantalizing option to be sure, but it's far from a no-brainer. Wiggins has the potential to be a special player, for one, and playing next to James would be the best thing that could ever happen to his career. Beyond that, trading for Love still doesn't fix the Cavaliers' biggest problem, which is interior defense and rim protection. You don't trade a talent like Wiggins if the return doesn't even shore up the team's most vulnerable weakness. 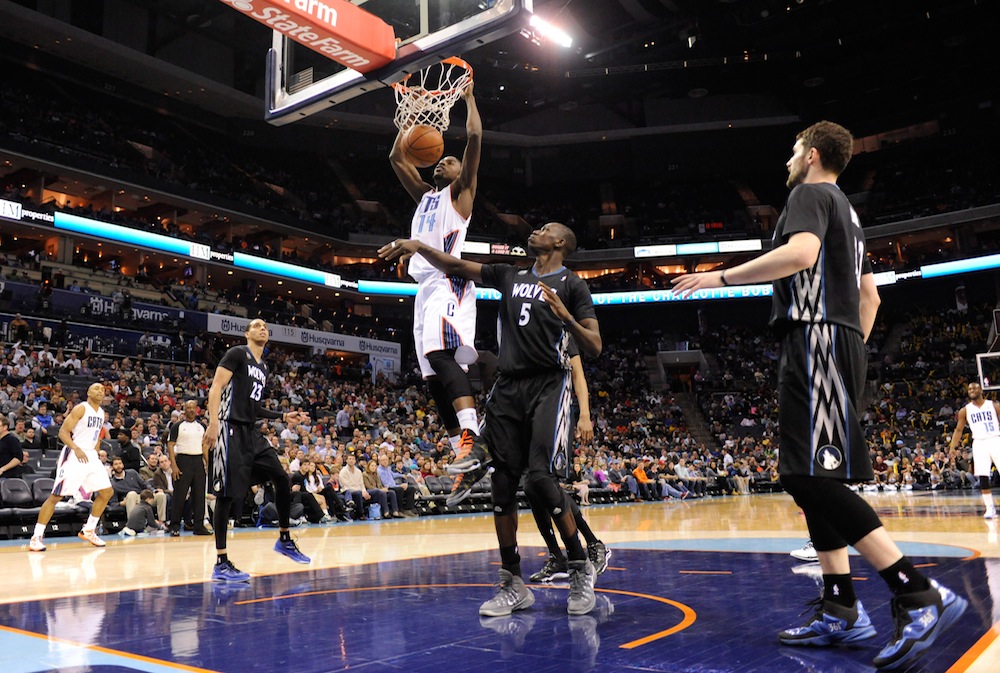 Anderson Varejao certainly could project as the ideal man in the middle for James' Cavs, but it's hard to count on him. Varejao will be 32 this upcoming season, and has played just 146 out of a possible 312 games since the 2009-10 season. It's difficult to expect him to stay healthy at this point, and Cleveland doesn't have much behind him after trading Tyler Zeller to the Celtics to make room for James' max contract.

Tristan Thompson, at 6'9 and 240 pounds, might be big enough to handle backup center minutes in the East, but he's another player Minnesota could want in a Love trade. Regardless, matching Thompson against Roy Hibbert or Jonas Valanciunas or Joakim Noah in the playoffs isn't a great bet because he'll be giving up so much size.

And therein lies the problem with Love. For as great a player as he is, he remains a poor defender. Love has detractors because he's never made the playoffs and some see his big stats as "empty" because of it. Those are pretty stupid criticisms. There is one legitimate fault to Love's game, though, and that's his defense. If the Cavs want to trade Wiggins, they would ideally be better off eventually going after a player like Marc Gasol, Noah or Bosh (not that they're available right now) who could help on both sides of the floor.

THEREIN LIES THE PROBLEM WITH LOVE. FOR AS GREAT A PLAYER AS HE IS, HE REMAINS A POOR DEFENDER.

Three-point shooting is all the rage now, but it won't matter if the other team keeps getting layups on you. This is the reason Bosh is one of the more underrated stars in the league: even at 230 pounds, he is able to effectively defend the paint at one end and stretch the floor at the other. That's a hell of a combination, and the Heat wouldn't have won back-to-back titles without it.

The Cavs also already employ a floor spacing power forward who could be a rough facsimile of Love. That's Anthony Bennett, last year's top pick who looked like a major bust as a rookie. Of course, Bennett is still only 21 years old, and should still be a quality player. He shot 37.5 percent from three-point range at UNLV, and seems to be fitter and healthier than he was a year ago, when a shoulder injury torpedoed his first NBA season before it ever really started. Bennett might also have to go in a Love trade.

In the letter announcing his return, James acknowledged a championship might not be imminent. He talked about wanting to be a mentor. Who better to have him mentor than Wiggins? Even without Love, the Cavs are likely still the favorites in a weakened Eastern Conference. Let's not forget LeBron won 66 games in Cleveland in 2010 when his best teammates were Mo Williams and Zydrunas Ilgauskas. He has a lot more talent around him now.

Kevin Love is great, but if the Cavs can't find a two-way center there is no reason to trade Wiggins. Let LeBron grow with Cleveland's young supporting roster and see what happens. He might have a lot of minutes on his body, but his career is far from over. He will still probably be one of the best players in the world four or five years from now. If Love fixed Cleveland's interior defense, it would make sense. Unfortunately, his biggest weakness is also Cleveland's biggest weakness. For as good as Love is, it just isn't worth it.