The Stanford product's agent claims to have suggested the abnormal D-League deal to the Thunder.

In trying to bend NBA salary rules to their benefit, the Oklahoma City Thunder and Josh Huestis stumbled upon a unique arrangement.

The Thunder selected Stanford's Huestis with the No. 29 pick in this year's draft, a spot where players normally receive immediate guaranteed contracts for two seasons with two team option years thereafter. But in this case the Thunder are sending Huestis to their D-League affiliate for a year to play on a significantly reduced salary -- an estimated $25,000 instead of $750,000 -- with the potential of starting the standard NBA rookie contract a year or two later. (The D-League's 66ers were moved from Tulsa to Oklahoma City this offseason.)

The Thunder may have found a loophole that allows them to stash their first-round pick in the D-League (at D-League salary) for one year. The NBA can't allow that to happen, Tom Ziller writes.

In essence, the Thunder are treating Huestis like an international player that stays overseas for years before coming stateside. Except in this case he's being sent to the D-League, where wages are minimal, instead of Europe or China, where they often exceed $1 million a season. (First-round pick Dario Saric, for example, is being paid just shy of $3 million to stay in Turkey this season in lieu of joining the Sixers.)

This arrangement wasn't the Thunder's call alone. In fact, Huestis' agent Mitchell Butler tells SB Nation that the player's camp proposed it during the pre-draft process.

The prospect's two agents -- Butler and fellow former UCLA player Toby Bailey -- were concerned Huestis wouldn't even be selected. He wasn't receiving much interest in the first round and was at risk of dropping out of the draft entirely given the depth in this year's class.

Thus, as a means of getting their client drafted, Butler and Bailey decided they'd be "open" to the idea of having Huestis develop in the D-League for a year if it meant getting drafted by one of two teams: Oklahoma City, which held picks No. 21 and 29, and San Antonio, which was at No. 30. Those two teams, Butler said, offered the kind of strong one-to-one D-League affiliation that would allow Huestis to thrive in the long haul, even if it meant sacrificing a year of earning power.

Why not go overseas, where the money is better? Butler said they were worried such a move, while more lucrative in the short term, wouldn't be beneficial in the long run because that club would not develop Huestis into the kind of player the Thunder wanted. They see Huestis as a wing player and were concerned another team might convert him into a stretch 4 or play him in a different role. Ultimately, that would stunt Huestis' long-term development.

The move has drawn lots of criticism for several reasons, most notably from our Tom Ziller. One complaint: it may violate an NBA bylaw that compensation cannot be discussed with draft picks until after the player has been selected. Whether that's true is open to interpretation. While Butler admitted this was a pre-arranged idea, he denied that any rules were broken, saying they weren't sure the Thunder actually were going to pick Huestis. 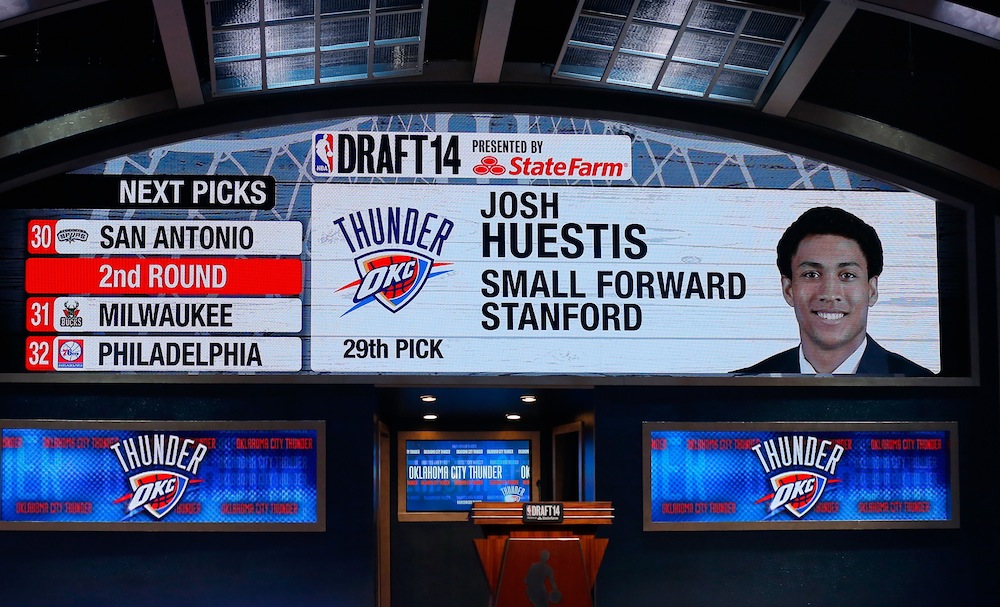 "There'll be conspiracy theorists that come out," he said.

The larger complaint centers around the implications of a player taking significantly less than a workable wage in the field for the unspoken promise of earning more later. It certainly doesn't reflect well on the Thunder, who appear to be gaming the system to save a few dollars on a luxury tax bill instead of paying Huestis the salary he's entitled to and assigning him to their D-League affiliate anyway. (The Thunder did not respond to multiple requests for comment.)

Butler insisted that the Thunder didn't give them any indication of when they'd sign Huestis to his normal rookie-scale deal.

"There's no guarantee [they do it next year], and that was part of the risk/reward we had to embrace," he said. "We know they really like Josh and we believe it should work out. The reward outweighed the risk."

It's worth noting the Thunder recently completed a similar arrangement with Grant Jerrett, last year's second-round pick. Jerrett was selected No. 40 overall and immediately assigned to the 66ers, where he played the entire season. After averaging 15 points and six rebounds per game last year with Tulsa, Jerrett cashed in with a four-year, $3.8 million contract with the final two years fully unguaranteed, a slightly smaller and different version of a first-round rookie-scale contract. Oklahoma City gave Jarrett that deal even though he recently underwent ankle surgery that'll sideline him for 4-6 months.

While Butler admitted this was a pre-arranged idea, he denied that any rules were broken, saying they weren't sure the Thunder actually were going to pick Huestis.

But there's a difference between doing this with Jerrett, a second-round pick who had no guaranteed contract waiting for him regardless, and Huestis, who does by virtue of being selected in the first round. The concern is that this sets a bad precedent where other players who aren't first-round talents can wedge their way up the draft because they've agreed to be dramatically underpaid for at least one year. It violates the spirit of the rookie scale, which is supposed to ensure rookies good enough to be drafted in the first round receive a competitive wage. It also pushes deserving players down to the second round, where no such guarantee exists.

Butler disagreed, saying it was a decision unique to Huestis that won't apply to other players. He also dismissed the argument that this is unfair for other deserving players by saying it's no different than when teams select international players in the first round just because they have no intention of coming to the NBA immediately. Clint Capela, selected by Houston at No. 25, and Bogdan Bogdanovic, selected by Phoenix at No. 27, come to mind there, though the Rockets surprisingly changed their mind and will bring over Capela next season.

"I don't think it'll set a precedent," Butler said. "We wouldn't do with 98 percent of the other teams in league."

The best long-term solution would be to improve the D-League to the point that it offers both more competitive salaries and mechanisms to ensure a true one-to-one affiliate system with NBA clubs. Were that the case, Huestis would earn a more appropriate salary, whether it's a larger D-League one or a special exemption on his rookie deal.

Until then, though, this exposes an interesting dilemma, one that could easily repeat itself again.