The Nerlens Noel we dreamed of shows up in Summer League

The 76ers' 2013 first-round pick put on a show from the opening tip in his first organized game since tearing his ACL 18 months ago.

Share All sharing options for: The Nerlens Noel we dreamed of shows up in Summer League

ORLANDO -- Nerlens Noel nervously smiled in warmups before an Orlando Summer League crowd filled with NBA executives, scouts, agents and media members. The No. 6 pick in the 2013 NBA Draft hadn't played an organized game of basketball for 18 long, arduous months thanks to a torn ACL suffered midway through his only college season.

It took only one play for those nerves to go away. On the game's first possession, Noel collected a post entry pass and took a power dribble toward the rim. He pump faked, got his defender in the air and slammed home a dunk with one hand.

"It wasn't by design," Sixers assistant coach Lloyd Pierce said. "We were trying to run something to keep him out of it, but it just fell in his hands and he made a great play.

"It relaxed all of us (coaches) and I think it relaxed him."

Noel needed that relaxation even more than his coaches. The last time he played an organized game of basketball, he suffered the worst injury of his basketball career.

It was the middle of February and the Kentucky Wildcats were 17-6 on the season, poised to make a run through the SEC en route to the NCAA tournament. Noel was on pace to challenge Anthony Davis -- his long-armed Wildcat predecessor -- and his single-season record of 186 blocks. 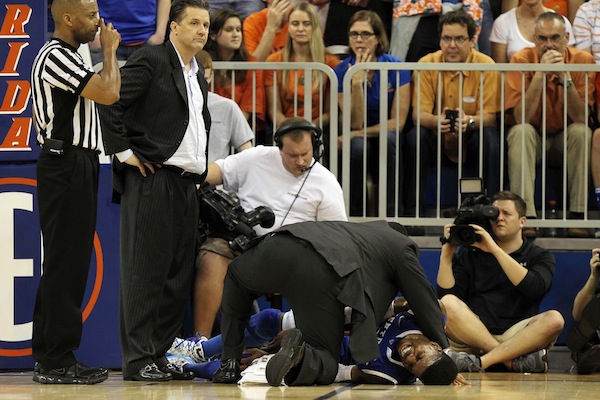 The Wildcats were down 12 points with just over eight minutes to go when Florida's guards ran out in transition. Noel quickly hustled back, blocked the shot from behind at the rim and landed awkwardly, tearing his anterior cruciate ligament in the process.

Kentucky never could recover without its man in the middle. It finished the season just 4-5 and lost to Robert Morris in the NIT. Noel's draft stock also took a major hit; he was widely considered the top prospect in the class before the injury.

That night, the 76ers traded their All-Star point guard (Jrue Holiday) for Noel and a future first-rounder. The Sixers then decided to keep Noel sidelined for the entire 2013-14 season.

"I was nervous at the beginning, but I seem to play better when I'm a little anxious," Noel said following his 19-point, two-rebound, three-assist, four-steal, one-block performance in an 83-77 loss. He said that he first used the knee injury as motivation, but hasn't thought about it since rehab.

Watching him in person, you wouldn't even know the injury occurred. He was extremely quick running down court and exploding off the floor.

Everyone will remember the opening dunk, but one of his most impressive plays came later. He caught the ball at the top of the key and exploded toward the cup, finishing an and-1 bucket with his left hand.

"I think I'm a little quicker than most big men, so I definitely saw the big man lagging back," Noel said. "With my first step, I thought I would be able to get my left [hand] and I did. He wrapped me up and I was able to finish the play."

The next time down the court, Noel dropped in a tear drop from just inside the free throw line. Moments later, he sent back a shot way above the rim. In the second half, Noel knocked in several free throws and even threw a savvy backdoor pass to teammate K.J. McDaniels for an easy dunk.

Watching him in person, you wouldn't even know the injury occurred. He was extremely quick running down court and exploding off the floor.

Pierce said he was most interested in how Noel would defend the pick-and-roll. Noel recorded four steals, but Pierce was worried that Noel's aggressiveness would leave the Sixers out to dry on the back end.

Noel, for his part, was excited by how he played, but acknowledged after the game that he still has a long way to go.

"I'm very happy, but I can't get too happy," he said. "I've got a long road ahead of me and I've gotta stay focused and keep getting better. There's no time for celebrating."

It's still early, but in his first organized game in 18 months, Noel looked like the top-notch prospect everyone expected. That's at least something to celebrate.