LeBron's co-star is declining, presenting a complication that could drive him out of Miami.

Share All sharing options for: LeBron James has a Dwyane Wade problem

The margin for error is so slim in building an NBA champion. Betting on the wrong player or the wrong process can throw everything into the wind. Even if you make all the right moves -- like the 2002 Kings, 2005 Pistons, 2008 Lakers or 2013 Spurs -- you can still lose to a better, luckier team. One injury can undo years of team-building; ask Chicago and Portland about that. Circumstances can create a painfully small window for expertly-built units, as happened with the most recent Celtics champions. (In fairness, that Boston team kept the window pried open for longer than should have been possible.) With smaller windows comes a higher likelihood of random chaos claiming rings nearly earned.

A daily column on the NBA.7/6: The Lakers might be Melo's best option7/4: This year's LeBron derby has 1 key difference7/1: Why a Rondo-Thomas swap makes sense6/30: How the Suns can rise to NBA glory6/30: NBA teams should be able to trade everything6/27: The Sixers have turned sadistic

As has been stated ad nauseum, there's no shame in winning only two titles in four years. The Heat as an exercise in superiority has been a success. They have been the most successful NBA franchise over the past four seasons. You can ask for more, but you'd be ridiculous to do so.

Now, barring a surprise short-term contract, LeBron James is looking to figure out where to spend his next 3-5 years. Knowing how slim the margin of error is when it comes to winning championships and knowing how good the competition is at the very top, it's really no wonder LeBron is proceeding methodically and cautiously. When LeBron and Pat Riley meet this week, this could all end quickly, as the Miami Herald's Dan Le Batard writes. (By the way, no one has more consistently nailed the LeBron story from an analytic standpoint than DLB.)

But there's two words in all of this I'm struggling to reconcile when I consider that lesson about the margin of error and LeBron's future. And those two words are Dwyane Wade. 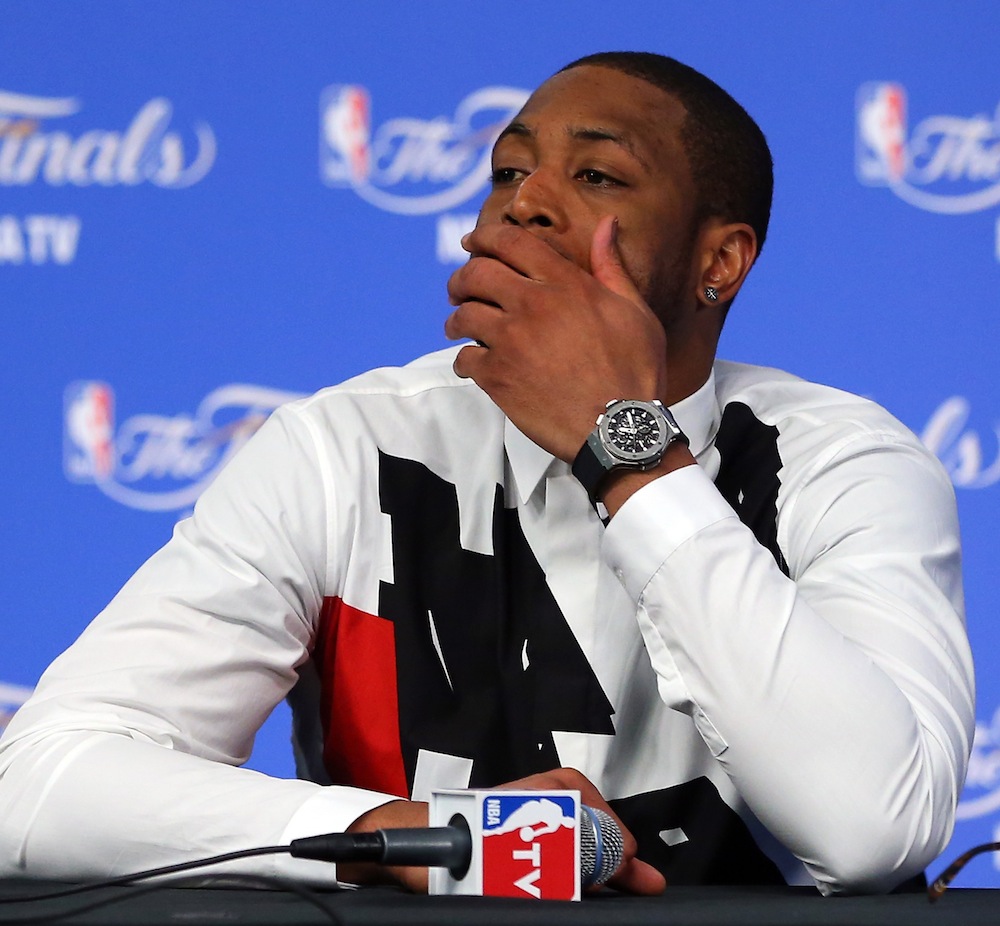 When you build a super-team, the margin of error on the fringes of the roster would seem to be greater. You're getting most of your production from your stars and you need specialists to fill the gaps. If your team is truly contending for titles, you'll have your pick of the ring-chasers. That's how the Heat landed Shane Battier and Ray Allen on affordable deals. The same applies to the Spurs and Diaw.

But when you rely so much on your stars and when you're dealing with a fairly rigid salary cap, you can't mess those big pieces up. Look at the most recent iteration of a Lakers super team, built upon the pillars of Kobe Bryant, Dwight Howard and Steve Nash. Bryant did his part, but Howard still had recovery from back surgery ahead of him and Nash began to break down as he approached 40. And so, the super-team immortalized in a fateful Sports Illustrated cover barely made the playoffs.

A player of Chris Bosh's ability should command big money and tons of attention in free agency, yet the rumor mill has been largely silent. Where he goes will have a huge impact.

Admit it, you love free agency

Don't lie to yourself and say otherwise.

Is Dwyane Wade, at this point, a mistake waiting to happen? Is Wade as a pillar of a super-team a bad bet? Paying Wade something like $11 million a year will limit Miami's ability to add a fourth star player to the mix, assuming Chris Bosh takes a similar amount and LeBron sticks with the max. And so, with that said, will paying Wade something like $11 million a year completely destroy Miami's already-small championship margin of error? Can the Heat cap themselves out on LeBron, Bosh and Wade and still compete for titles in 2015, 2016 and 2017?

That's the question that plagues Miami. The Spurs survived paying Manu Ginobili $14 million in 2012-13 because the Spurs stole Kawhi Leonard, had All-NBA first-teamer Tim Duncan taking less than $10 million and had sixth-place MVP candidate Tony Parker making $12.5 million, well less than market value. That setup -- one bad contract with loads of great ones -- got the Spurs to within a Jesus Shuttlesworth eyelash of a championship. The Heat don't have a Kawhi or a Tim Duncan at seven figures to make up for a bad Wade deal, and with ever-tightening salary cap restrictions and LeBron focused on the max, it's probably not going to happen barring a draft coup at the end of the first round. (Is Shabazz Napier that coup? It's pretty unlikely, as good as he looks.)

LeBron and Wade are close friends, and champions together. Wade opted out of $42 million in guaranteed money to help keep LeBron in South Beach and add more talent to the Heat. But when LeBron and Riley sit down and look into the future, it may be the case that to pry that margin of error open enough to guarantee more rings, Miami needs to get Wade to take even less ($8-9 million). Or, more drastically, say goodbye.

Wade has the numbers to back up a max deal, and if LeBron had never come to Miami, we'd probably be talking about Wade much like we talk about Carmelo Anthony. He's only a problem in the context of the Heat's limitations and needs.

But Wade chose this fate by joining up with LeBron and Bosh, and now he waits for judgment. May Bron have mercy on his soul.