Why would Coach K choose Mason Plumlee over DeMarcus Cousins for Team USA's World Cup roster? We'll try to find a reason, but there may not be a good one.

Share All sharing options for: There are no good reasons to take Mason Plumlee over DeMarcus Cousins on Team USA

We knew that USA Basketball was going to enter the 2014 FIBA World Cup with a mostly depleted roster, but nobody could've guessed the team would pile on with self-inflicted wounds. However, that might be the only way to describe it if Team USA selects Mason Plumlee over DeMarcus Cousins, which is "likely" according to ESPN's Brian Windhorst.

With absences from elite American big men like Dwight Howard, LaMarcus Aldridge, Kevin Love and Blake Griffin leaving the team without its usual stable of quality options, Cousins has seemed like a lock to make the team as a big, physical center and rising star in the NBA. After all, coping with the Gasol brothers and Spain won't be easy.

What could possibly be the reason for this decision? Let's do our best to make some sense of the situation.

Given the vast gap in experience and talent between Cousins and Plumlee, it's hard not to consider the college angle here. Plumlee is less than two years removed from being a star for the Blue Devils, and they happen to be coached by the same man as Team USA, Mike Krzyzewski.

Plumlee was always a coach's favorite during his days at Duke, and this feels an awful lot like that preference is coming into play

While nobody is suggesting that winning isn't the top priority for Coach K and his staff, this potential decision seems almost indefensible beyond the context mentioned above. Plumlee was always a coach's favorite during his days at Duke, and this feels an awful lot like that preference is coming into play with the construction of Team USA's World Cup roster.

The official group hasn't been announced yet, and the event doesn't start until Aug. 30, so we can temper our frustrations for now. But this is a pretty firm report from a genuinely plugged in reporter, and the implications are both substantial and intriguing.

Even with several big names missing the World Cup, Team USA doesn't lack willing shooters. Guys like Kevin Durant, James Harden, Kyrie Irving and Paul George will be happy to shoulder the scoring load, making it important to balance the roster with players who don't need the ball to contribute.

That's why Kyle Korver and Klay Thompson will be so important to what the Americans do, and it's one reason Plumlee might be preferred over Cousins, who has developed into the one of the highest usage players in the NBA.

Plumlee certainly isn't a player who would command possessions, not on a roster with this kind of talent. That's not always a great thing, but under these unique circumstances, it's one reason with some possible basketball sense behind it.

We all love Cousins and his superlative combination of size and skill, but he's never had a reputation for being an asset in terms of temperament and leadership. At times in Sacramento, the big man's body language has wavered, and reports of his up-and-down relationships with coaches haven't helped things.

For a team like the U.S., which is bubbling with talent, maybe Coach K and company simply don't want to mess up a good thing with one bad apple. While it would be unfair to characterize Cousins as a legitimate problem, it's fair to wonder how he might react in a chippy, physical game while throwing elbows for 40 minutes against Marc Gasol.

Plumlee can't give opponents the kind of trouble that Cousins could, but he could limit it going in the other direction.

Despite all of the above reasons, defense seems to be the most common argument for Plumlee over Cousins. This quote from Coach K, via USA Today, pretty clearly signals some concern for the way Cousins fits into the team's plans:

"In DeMarcus' case, the style we play lends itself to what Anthony does, or even what a Plumlee is doing," Krzyzewski said. "A little bit of Drummond (also), because Detroit, what they do, is they put he and (guard Will) Bynum in the game and all they do is pick and roll. DeMarcus' game is different, so he has an adjustment to make and he's trying to make it."

If they're convinced that Plumlee is a defensive upgrade, or at least a better fit for their defensive style, then that may be the best knock against Cousins. However, it's not like Plumlee is a future DPOY, and it's fair to wonder whether that difference is being overblown given the canyon between the two on offense. 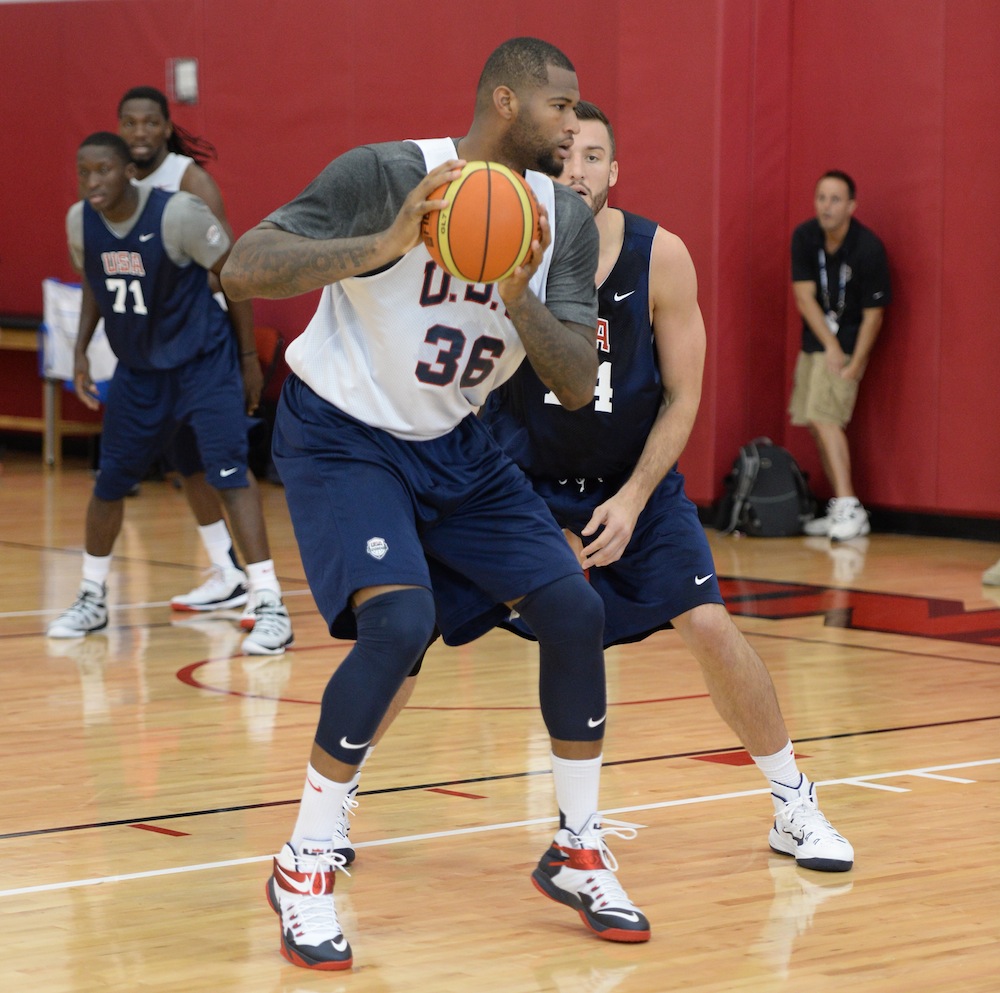 You know what? There is no good reason

Last season, Cousins was a force for Sacramento, averaging 22.7 points, 11.7 rebounds, 2.9 assists and 1.3 blocks per game. He was extremely efficient, too, with a 26.1 PER, .555 true shooting percentage and league-leading 30.5 percent defensive rebounding rate.

Those numbers would make him one of the most statistically impressive players at the World Cup, let alone a better player than Plumlee. The former Duke star averaged 7.4 points and 4.4 rebounds per game as a rookie in 2013-14, carving out a solid role with his energetic, efficient style of play.

While Plumlee brings some unique traits to the table, including more lateral athleticism and a special bond with the head coach, any logical analysis of the situation says this would be a bad decision. Cousins is simply a better basketball player than Plumlee, without being redundant to other pieces on the roster.

We know fit matters in basketball, but at a certain point, talent outweighs everything. Cousins vs. Plumlee would appear to be one of those cases.