The NBA is at a breaking point with three-point shooting

Teams are shooting more from deep than at any time in NBA history, and it’s causing problems.

Share All sharing options for: The NBA is at a breaking point with three-point shooting

The debate between Candace Parker and Shaquille O’Neal on Inside the NBA underscored how Shaq has been left behind by the modern NBA. Teams are stacking their rosters with shooters, stretching defenses and tearing conventional basketball concepts asunder. The role of sharpshooter, once reserved to a couple of players on the roster, has now expanded to where as many as four excellent three point shooters could be on the floor at the same time, and even centers have become capable of draining shots from the outside, too.

When it comes to shooting there’s no question that NBA players are getting better, but now there are questions whether this shift is ruining professional basketball. Teams have worked out that the math is on your side to shoot as many threes as possible during a game, pushing aside conventional notions of mid-range jumpers, or post-ups, which were so popular in the 90s and into the 00s. The shift has some are wanting to push for a change.

ESPN’s Kevin Arnovitz spoke to several figures around the NBA, and there’s a growing concern that the proliferation of shooters in the league is reaching a critical mass. There are questions about whether defense should be tightened, or new rules benefitting defenders more — but at least one of the proposed changes is absolutely wild.

“A more radical proposal from a longtime league power broker who wishes to remain anonymous (unless the idea gains traction) would curb inflation by limiting supply: Cap the amount of 3-pointers a team can take over the course of a game.”

The idea would be that teams could only attempt a limited number of counted threes in a half, floated as being 20. After those 20 attempts are used up each three would be worth two, like an ordinary field goal. Then, with 6:00 left in the game the floodgates would open up, allowing teams to attempt as many threes for full value as possible.

However novel this might seem, the idea is functionally terrible. Adding another layer of in-game tracking to basketball is just an annoyance, for fans and players alike, pushing the game into bizarre video game territory. The beauty of basketball is the nuance and complexity, hidden behind what appears to be simplicity. It makes it the ultimate sport to enjoy on a surface level, with much, much deeper strategy for those who want to dive in.

That doesn’t mean things are fine, though.

There is no question that teams are shooting more from deep than ever before. 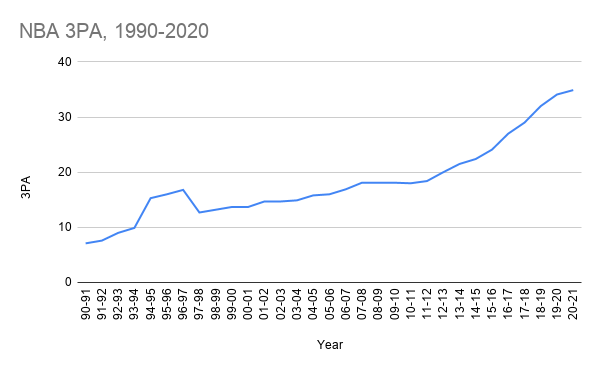 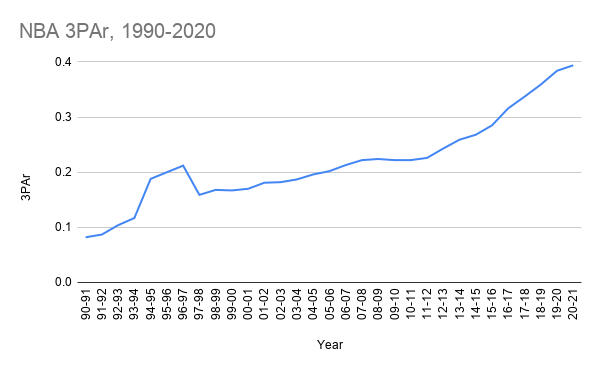 What we see is a fairly even progression at the beginning, followed by an exponential explosion. It took 18 years for the average number of three-point attempts teams take per game to increase by 10 between 1990-2007. It then took another 10 years for three-point attempts per game to increase by another 10 shots. In the last four years, we’ve seen the league wide average jump another 5.9 three per game, putting it on a trend to complete another 10 shots per game cycle in seven years.

But are teams shooting better?

In short, no ... but it’s complicated. The issue is there’s seemingly no limiting factor to teams attempting more threes. While teams are shooting more from deep than even, the overall average percentage league-wide has remained fairly constant.

What this means is that shooters in the NBA have always been great, it’s just that there are far more shooters in the league than there were 30 years ago. Teams effectively lose nothing from having every player shoot from deep, rather than trying to get easy buckets in the paint. If we stay on the current trajectory teams will be shooting half their shots from three by 2025-26.

Thus far we have only one team, the Houston Rockets, to shoot a 3PAr of over 50 percent in a season — and they did it in three consecutive years. The 17-18, 18-19, and 19-20 Rockets hit this mark. While Stephen Curry and the Warriors are often blamed for the proliferation of deep shooting in the NBA, the reality is that during their championship seasons they shot a 3PAr in the low .300s. Pistons coach Dwane Casey, the defensive expect who served under Rick Carlisle in Dallas agrees.

Casey says that the volume of 3-point shots is, in large part, a result of those well-intentioned efforts to create more space on the floor for a free-flowing game. The deluge of 3-pointers that has followed isn’t entirely a product of kids trying to imitate Curry but a consequence of a game when those kids are often wide open because spacing has been inflated.

“One primary thing that triggers all those 3-point shots is penetration,” Casey said. “When you can’t touch anybody, you are going to give up penetration. But these are hard conversations.”

Writer’s note: This originally published with a mathematic mistake in the following paragraph. It has now been updated to reflect the correct figures.

In order to counteract this disparity we would need to see an improvement in two point shooting to make up for it. This season teams are shooting .368 from three, and .528 from two. In order to make it worth it for teams to alter their offenses, without external intervention, we would need to see a .184 disparity in favor of 2P% to offset the basic the fact a three is worth 1.5 times the points of a two.

That means seeing a 2P% of .552, which is possible, but unlikely. Only eight teams are shooting a .552 from two or better this season, while 13 teams are shooting better than league average from 3. This means that the weight of threes still outweighs the benefit of going for two — even if teams lifted their shooting.

For instance, take the league-leading Brooklyn Nets, who are shooting .571 from two. They are also shooting .407 from 3. They would need to lift their 2P shooting to .610 to reach point parity. Only two players in NBA history average over .600 from two, and this would need to be applied to an entire team.

Is this a problem though?

That really depends on what you value in basketball, but it’s clear that rampant three point shooting, especially approaching 50 percent of a team’s attempts, will lead to the homogenization of the NBA. A game will still have different strategies and players, but always with the goal of taking shots from deep unless they aren’t available.

Homogeny is a problem, because it makes games boring. Variety is what makes sport exciting. It was fun to see the deep shooting Warriors take on the paint-dominating Cavaliers in the Finals from 2015-2018, but decidedly less interesting to see two teams use identical strategies, to varying degrees of success.

There is a clear issue that players are just getting too good. Everyone is learning to be a shooter, everyone is as successful as the snipers of the early 1990s. Part of that is due to defensive limitations to free up shooters, and part is simple evolution of the league. However, it order to keep the balance so basketball remains compelling it’s clear some changes will need to be made in order to reduce the incentive to shoot from three.

There are a couple of easy suggestions on how to do this, without resorting to a ludicrous video-game like system of limiting effective attempts.

These are four of the suggestions that have been floated by basketball analysts, all of which would open up the flow of the game better. The issue isn’t fundamentally alter or punish players for becoming better shooters, but removing requiring more skills than just being a good shooter to succeed from beyond the arc. In these case it would require players to be better ball handlers, more effective shooters in traffic, and push players to be better free throw shooters.

The key to opening up the NBA again isn’t punishing players for focusing on the outside game, but pressuring them to add more tools to their suite by lessening the impact on defenses and giving them freedom to do more. These changes could be slowly added to the NBA and evaluated over time, but the end goal should be to return to the core notion that different basketball strategies should be effective in the NBA — not just who can shoot best.