Despite the best methodology for crowning a national champion, college basketball stinks when it comes to opening the regular season. A solution to the problem, plus the top and bottom ten moments from the week that was, and a preview of this weekend's slate of games.

I have the utmost respect for a new local business that goes for the hard Grand Opening. You know, some restaurants wait a few weeks, test out the line cooks, make sure the automatic timer on the fryolator is reliable, then bust out the song and dance and drink deals once they’re confident everything is in order.

Just about every sports league starts their season with a hard open. Sure TV has forced pro sports to begin their schedule with just one or two marquee games, but at least you can point to a calendar and ID the first day of the season. College football adheres to this as well.

But college basketball, a sport where people don’t really tune in until after the Lombardi Trophy is handed out, opts for the soft opening each season. Just when does this season start? It's a rhetorical question. I realize the first official game of the season was between Pittsburgh and Rhode Island. The Rams kept it close until the Panthers pulled away late, led by Brad Wannamaker's 24 points. Blah. We all remember it.

However, others would insist the season didn't commence until Tuesday at the stroke of midnight when Miami and Memphis tipped-off, the first of 19 games part of a great Marathon Tuesday. Even more extreme, a select few don't even acknowledge college basketball until the Maui Invitational, the longest-running and most notable early season tournament. 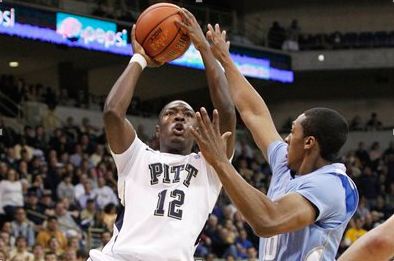 The gimmick works, creating water cooler fodder for the common fan, and top-10 non-conference match-ups that excite diehards. It's the closest thing we have to a defacto opening night, so let's be change agents and push the event up exactly 96-hours, and start the college basketball season on the second Friday of every November.

We already have a "Midnight" theme to play off of, and we all love to have fun on a Friday, especially the college kids. Imagine the antipication during the week. Watching a ticker count down the hours and minutes to the first jump ball of the season. Miami-Memphis, it's not a bad way to start the season, but let's ensure we get two ranked teams for the first game. Continue to follow the format of games held the Pacific Time Zone during the wee hours of the morning, then wake up to some low- and mid-major inter-conference games. Toss in the Connecticut Lady Huskies to prevent the impression this is strictly a misogynist celebration, then cap off this extraordinary day with a marquee game at 8 p.m., the caliber of Ohio State-Florida, for primetime. After that, cool down with an enjoyable game out west, much like San Diego State-Gonzaga and gear up for the official start to the regular season. I don't see anything wrong with this.

If we're required to for scheduling purposes, you could still absorb the opening round 2K Sports Classic (Coaches vs. Cancer) games into the opening day. Very infrequently does the circus or rodeo come reserve college sports arenas, so it's very likely these venues sit empty waiting all autumn, waiting for college basketball. Sure this is wishful thinking, given the tortoise speeds at which the NCAA operates to enact provisions and rule changes, but the game needs something we can all point to and say, "that's how you get me watching college basketball in mid-November."

Just imagine the drinking games twentysometings will challenge themselves to!

And now to the week that was...

When you're having a bad day, turn to the microblogging platform to air your grievances. That's what Enes Kanter did following the official announcement that he was deemed permanently ineligible by the NCAA. He's officially been labeled a "professional," but these tweets certainly show his immaturity. 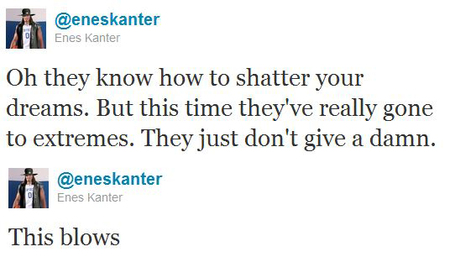 It's a three-day weekend in these parts, and while we haven't reached the ditch-the-girlfriend-and-grab-unilateral-control-of-the-TV-remote time of the year, there's still a handful of reasonably enjoyable games to divert your attention away from football: