After a string of near-upsets, the Oakland Golden Grizzlies have finally taken down a top-tier program. Twelve-point underdogs coming into Thompson-Boling Arena to play the undefeated No. 7 Tennessee Volunteers, Oakland outshot the Vols 53.6 percent to 45.9 percent. Center Keith Benson was dominant, scoring a season-high 26, grabbing ten rebounds, and adding two blocks. Guard Larry Wright and forward Will Hudson pitched in 19 and 17 respectively.

This was bound to happen sooner or later, with Oakland playing so many big-name teams close. This season they've lose to the Michigan St. Spartans by one, led the Illinois Fighting Illini in the second half, and hung with the Purdue Boilermakers until halftime.

The Vols fall to 7-1 just days after their win over the Pittsburgh Panthers pushed them into the top ten. Tennessee had four scorers in double digits, but nobody really wants to hear about that right now. They'll try to get it right against Charlotte on Dec. 17, while Oakland tries to keep the upset show rolling against Michigan on Dec. 18.

Bruce Pearl Face, for those of you who appreciate it: 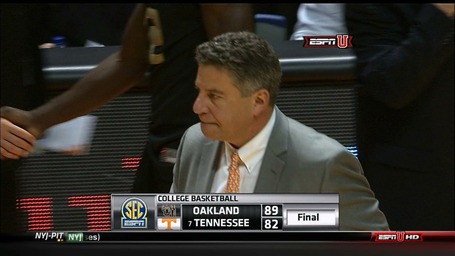 Oakland Vs. No. 7 Tennessee: Golden Grizzlies Knock Off Vols, 89-82