It's finals week for many schools across the country. We're not handing out grades, but we are recollecting on the grind of term papers and multiple choice exams, and acknowledging some welcome additions to major programs with conference play upon us.

Following a month of early season basketball tournaments, we have reached a bit of a reprieve in the college basketball season. It's finals week, baby!

Also known as the opposite of Spring Break, finals week is one of the few times in life the working man can call his son and emphatically yell, "sucks to be you!" into the telephone as he kicks off his shoes and cracks open a crisp PBR to commence a relaxing weeknight. The vicious cycle of sleep, test, eat, study, sleep is certainly grueling, but it's followed by a nice trip home that's full of debauchery with high school friends. Your mom just wants you to leave, your dad just wants his half-empty case of PBR back. It's a wonderful time, one I continue to cherish as I move into adulthood.

Finals week is also the time where all students must face the music. This includes the college basketball player who should not consider himself exempt from penalties as a result of a crappy academic semester. Finals week can mean significant trouble for a basketball team. We remember the 2005-06 Maryland squad, when leading scorer Chris McCray became academically ineligible after the fall semester, spoiling the rest of the Terrapins season. More recently, in 2008, UAB had to boot four players, depleting their roster and nearly blowing up their rotation.

This season, a handful of teams are conversely welcoming the end of the fall semester. With suspensions ending and players are finally cleared to suit up, teams could see benefits that are the college equivalent of a trade-deadline acquisition.

Most notable is Kansas' Josh Selby. Because Jared Sullinger is a back-to-the-basket guy, he lacks flash. And because Kyrie Irving's injury may prevent him from ever playing college basketball again, there's still time for Selby to become the sexy freshman we all gush about. Undefeated and looking fairly sharp at all positions on the court, the addition of Selby could propel the Jayhawks into the national title conversation. After sitting out the first nine games for from Carmelo Anthony's buddy, Selby is ready to go.

In the SEC, Mississippi State's Renardo Sidney is finally all-systems-go to debut Saturday down at the Bahamas' Atlantis Resort against Virginia Tech. Sidney's story is more of a saga, and is serving as a prime case for criticizing the incongruities of NCAA bylaws. While a virtual unknown in the general sports world, Sidney is so well known, yet unknown, in college basketball circles, he just might be someone more famous than good. We've heard a lot about this guy, but he has yet to log a minute of college basketball in the span of 45 games played by the Bulldogs. He's an absolute load, and could really help Rick Stansbury's club by providing scoring and offensive rebounding to help a Mississippi State team that gets only 66 possessions a game.

So with finals week in full swing across the country here's hoping your favorite player passed his exams ... or at least found someone to take them for him. And for those teams punching up their rotations, be thankful this is amateur athletics and you don't have to negotiate a contract extension.

Now to an abbreviated week that was, because it's finals week, and I was tied up after procrastinating with my Christmas shopping. 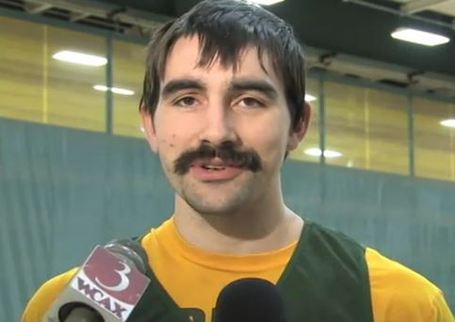 We wanted to show you just how articulate Syracuse's Scoop Jardine has been lately discussing the trials and tribulations of college girls, but we really can't anymore. Instead, we'll settle for a boring PG-rated assessment of Florida State chicks from Seminoles forward Chris Singleton.

It's a three-day weekend around these parts, and while I will be jet-setting to an undisclosed warm-weather destination with the family for the next 10 days (off the grid, college basketball-less), Saturday is shaping up to be a nice day of games. Other than that it's a pretty bare weekend as schools wrap up the test-taking.