Jared Sullinger Records Double-Double In Return For No. 2 Ohio State

The return of player of the year front-runner Jared Sullinger and Cincinnati's first game since brawling with Xavier highlighted college basketball's Wednesday night.

Share All sharing options for: Jared Sullinger Records Double-Double In Return For No. 2 Ohio State

At what point do you think the girl from "Baby It's Cold Outside" realized she was dealing with a rapist? My guess is, "say, what's in this drink?" If not, then "the answer is no" must have been a pretty rude awakening.

(Richmond and Iona tipped off at 3 p.m., so please note that all superlatives this morning are ending with "day" instead of "night." I know. My mind's blown, too.)

There weren't any elite showdowns or even competitive games between decent teams, so we'll just go with the day's actual best game (novel).

Mack Darrow did his best Doug Davis impression by burying a three at the buzzer to lift defending Ivy League champion Princeton to a dramatic 72-71 overtime victory over Rider. Davis, who hit the buzzer-beater to top Harvard and send the Tigers to the NCAA Tournament a year ago, saw the Bronco defense collapse on him in the final seconds and spotted a wide-open Darrow.

"I was kind of expecting Doug to be the hero, as always," Darrow said. "I just kind of stood still and let him rub off my screen and do his thing. I walked in trying to get a better look at his buzzer-beater, and it turns out I found one."

Rider (1-10) is off to its worst start in 68 years and playing without injured All-MAAC forward Novar Gadson (knee). Naturally, they blew their largest lead of the season (16 points) and lost at the buzzer.

The holidays, man. Sometimes they're brutal.

A second straight day without a genuine upset, so we'll give some love to the Bears, who notched their first win of the season.

Because of its dynamic backcourt, Glover is often the third player mentioned when people talk about Iona. It's a bit absurd considering the senior forward is averaging a team-best 19.6 points and 8.4 rebounds, and is probably the early front-runner for MAAC Player of the Year.

Glover lit up the scoreboard again on Wednesday, hitting 11-of-13 shots on his way to a 24-point, eight-rebound performance in Iona's 88-79 win over Richmond.

Antwaine Wiggins, Charleston - Matched his career-high with 24 points (16 of them coming in the second half) as Charleston beat Tennessee (71-65) for the second straight year.

Terrell Stoglin, Maryland - Scored 20 points and made the biggest plays down the stretch to help the Terps overcome a seven-point halftime deficit and knock off Florida International, 65-61.

QUOTE OF THE DAY: "I just felt like it was a minor setback for a major comeback."--Jared Sullinger

The national player of the year front-runner returned to the floor after missing two games because of back spasms and scored 12 points to go with ten rebounds in 25 minutes of action. The second-ranked Buckeyes overcame a slow start to blowout USC-Upstate, 82-58.

IMAGE OF THE DAY: 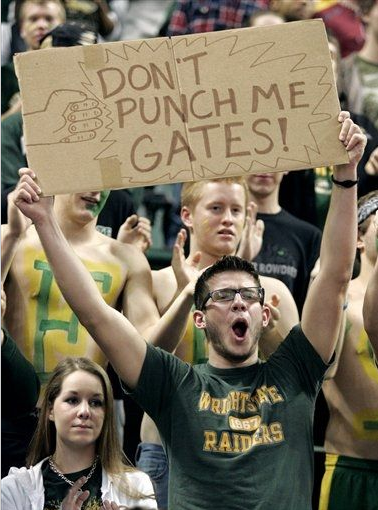 HIGHLIGHT OF THE DAY:

Here's the Princeton buzzer-beater, seen as it was intended to be seen: from the perspective of a shaky, hand-held camera filming a television replay.

1. Jared Sullinger did not start for Ohio St. in his return to the floor, but he did end up playing 25 minutes. Even though he recorded a double-double with 12 points and ten rebounds, it was apparent to everyone - including Sully - that he has some work to do in order to get back into shape.

"I was tired. Taking two weeks off is killer," Sullinger said. "I tried to do some stuff [while sidelined] like the underwater treadmill, and I tried to get my wind back. But obviously today I was very, very out of shape."

2. Cincinnati actually looked much better than it has at any point this season in its Yancy Gates-less 78-58 win over Wright St. The undersized Bearcats opted in favor of an outside attack, launching a season-high 32 three-pointers and connecting on 14 of them. That 44 percent accuracy is 10 points higher than UC's average mark from deep. This was only game one of Gates' six-game suspension, but if this keeps up then Mick Cronin will have to seriously consider sticking with this offensive philosophy and making Gates a reserve.

3. UCLA may have played its best game of the season (not saying a whole lot) without injured forward Travis Wear. The Bruins got solid play from reserve Anthony Stover - who missed the beginning of the season because of a shoulder injury - and bested Eastern Washington, 60-47.

4. It was disappointing to see a Maryland team that has overachieved a bit to this point struggling so mightily with FIU. It was much more disappointing, however, to see the lack of fans in attendance at the Comcast Center. Terp basketball fans are supposed to be among the nation's elite, but that was a pretty embarrassing display.

5. We talked about Mike Glover's performance earlier, but Iona also got 15 assists and 13 points from point guard Scott Machado. That's the 7th time in ten games that Machado has hit double-digits in assists.

6. No. 6 Baylor was the only ranked team outside of Ohio St. playing on Wednesday night, and the Bears had little problem with Bethune-Cookman, 69-42. They now get to turn all their attention to Saturday's big test at BYU.

7. College of Charleston fans rushed the floor after beating 3-6 Tennessee. The once-beaten Cougars were favorites. That's some shameful ish.

8. UNLV attempted to halt its annual "post-big-November-win-slide" (it's a thing) by grinding out a 65-54 win over UTEP. The Rebs had lost two of four since knocking off then-No. 1 North Carolina.

9. Former McDonald's All-American Jelan Kendrick was expected to make his Ole Miss debut Wednesday night, but instead the Memphis transfer was held out because of what was termed a "coeaches' decision."

"Not ready to put on the uniform yet," Rebel head coach Andy Kennedy said. "To me that's a big deal. I'm the head coach at Mississippi and you have to earn the right to put the uniform on."

Ole Miss improved to 9-1 with a 66-54 win over Louisiana-Lafayette.

10. According to CBS, talented Oregon transfer Jabari Brown is scheduled to visit Georgia Tech this week. He took a visit to Missouri last week.