Share All sharing options for: College Hoops Heavyweights And The 'Best' Rivalry

The P.A. announcer booms through the speakers right before tip-off: "Welcome to Rupp Arena, the home of the greatest tradition in all of college basketball." And he's definitely right, today.

There's nothing in college basketball better than Kentucky's tradition. Except maybe Carolina's tradition. And in 2011, there's no better team in America than the Kentucky Wildcats, except maybe the North Carolina Tar Heels. If they're together on one court, one way or another, you're taking about the greatest college basketball has to offer. And that, more than anything else that happens at Rupp Arena on Saturday, is the point.

I traveled down on Friday night, and Saturday morning I'm waiting in line at a Rupp Arena concession stand about 20 minutes before tip-off. A Kentucky fan walks up to me. I'm wearing a UNC jersey, and he points to the Jordan Brand label. "Is that guy gonna be here today?" he asks.

"Don't know," I laugh nervously. He seems a little drunk, and I'm a little wary. Since getting in the night before, this had been the default setting for everybody I met on both sides--cordial, but wary. No disrespect, but nobody looking to congratulate each other, either.

I visited Kentucky for a UNC-UK game two years ago, and back then all the Kentucky fans greeted me with open arms. That game was like a friendly meeting between royal families that respect each other. This time the stakes are higher, and everyone's more guarded. There are more Carolina fans here than last time, and less Kentucky fans ready to give a warm welcome to Lexington. So no, I'm not ready to have some Kentucky fan tell me that Carolina's going to need Michael Jordan to beat the 'Cats. But this guy takes it in a different direction.

"Well I'll tell ya what," he laughs back, "If you guys make it to the end, bet you he'll be right there cheerin' ya in New Orleans." I nod and smile. "And hopefully you'll be playin' us," he adds.

"That's the way it should be this year," he nods, "And a lotta other years before this. And a lotta years after this." I nod again, get my food, and move toward my seats. We shake hands and he says, "Good luck today, should be a great game. Hopefully we see each other again in a few months."

College basketball's defined by its greatest rivalries, and there are certainly more entertaining, longstanding rivalries than Kentucky and UNC. If there's a "rivalry" between these two, it's characterized by mutual respect more than any dazzling loathing.  But then there's a historical context, too, where these programs play tug of war to decide who really owns "the greatest tradition in all of college basketball."

If there's a "rivalry" between these two teams, it's less about who's better than who's best. Like, in all of college basketball. These are the stakes Saturday.

The building vibrates even before the opening tip. This terrifies me as a Carolina fan. Kentucky scores first, on a fast-break layup where they scream up the court in about two seconds, and I feel an immediate sense of dread. Given the talent Kentucky has and the delirium pulsating throughout Rupp, this game has the potential to get really ugly, and quick.

Then Harrison Barnes hits a three on the other end, and the building goes dead silent. And I remember, "Oh yeah, we're just as good. This is going to be a f***ing war." There are lottery picks all over the court, and for maybe the only time all season for either team, their cartoonish talent advantage has turned into pretty much a stalemate.

Carolina hits lots of threes early on and has the upper hand through most of the first half, but the lead never goes farther than five or six points. Michael Kidd-Gilchrist is a terror on both ends for Kentucky, and even as Carolina maintains a nice cushion throughout most of the first half, Terrence Jones pours in 14 first-half points, quietly keeping the game close, the crowd in a frenzy, and me nervous as hell, afraid to get too excited about this early lead.

A five-point lead over an average team is shaky enough, but against a team like this, in a place like Rupp, five points is basically a tie. It's only a matter of time before Kentucky evens things up.

And sure enough, Kentucky takes the lead five minutes into the second half, thanks mostly to Kidd-Gilchrist, a wrecking ball of a small forward who hits a flurry of jumpers like a bunch of body shots, slowly chipping away at the Heels' lead. Not that Carolina stops hitting back. As soon as Kentucky goes up one, P.J. Hairston hits a long three to take the lead right back.

The refs let both teams play, and both teams play mostly mistake-free--they'll have just 22 turnovers combined when it's all overwith. It's not perfect, but as college basketball goes, this is as close as you get. So this is how the game plays out for the final fifteen minutes--Kentucky delivers a few big shots, Carolina counters, and then it all repeats itself.

The shots both teams hit would be knockout punches against lesser teams, but not today. Big shot after big shot, for 40 minutes. The crowd stands for most of the second half, giving this game what it deserves.

Afterward, Roy Williams tells the media, "It was a big time college basketball game, there were some very talented and gifted youngsters out there really playing hard." Meanwhile John Calipari says, "Both teams gutted it out, just gutted it out. This is supposed to be in March, not now."

Boxing analogies are the most overused sports cliche this side of war rhetoric, but for this game it fits. Ordinarily with college basketball, it feels like watching a middleweight fight between journeymen--the genius isn't necessarily in the raw power or skill, but the battle itself.

Most of college hoops comes down to enjoying the interplay between imperfect opponents. Sometimes that means an underdog fighting above its weight class and pulling off the upset, and other times it's two flawed teams coming together for a matchup that exceeds the talent on the court. In other words, most of college basketball is like a Mickey Ward-Arturo Gatti fight. That's not a knock, either; those Ward-Gatti fights were incredible.

But Carolina-Kentucky felt different. After I went to Lexington two years ago, Calipari's team won and it marked the first statement that things would be different with Cal in charge. As I wrote then, "This is only going to get more intense. Just when you think a rivalry's dead, John Wall comes to Kentucky ... and suddenly John Calipari has the Wildcats looking like the hottest program in college basketball. Next year, Harrison Barnes comes to UNC, and who knows what'll happen?" Two years later, we're seeing what's happening.

Kentucky and Carolina are a different breed. Maybe it's an aberration thanks to stars who came back to school to avoid a lockout, or maybe it's the sign of what the world will look like with a raised NBA age limit. Either way, this year they have talent that seems like it should be illegal, and watching them trade blows is almost like watching a different kind of college basketball. You wish they could play a seven game series to settle this fair and square. You appreciate the competition, but there's an element of awe, too.

We thought true, UCLA-type heavyweights couldn't exist in the modern era, but there they were Saturday, going back and forth, trading shot after shot without blinking. This wasn't Ward-Gatti; gritty teams were replaced with great players who turned Saturday into something less familiar.

Because of expanding conference schedules and the murky business of non-conference scheduling in college hoops, there's a chance they won't play this game in the coming years. But here's to hoping they do; no two programs consistently recruit the kind of talent that Kentucky and Carolina do, and as long as the talent level remains where it is, every game will be as much as a testament as to what these programs are as to what college basketball can be.

...The game ends with the ball in Carolina's hands. You know how it ends by now. Down one with a little more than 20 seconds on the clock, the Heels have a chance to win. A chaotic entry pass into Tyler Zeller on the low block eventually puts the ball in John Henson's hands about eight feet from the hoop. He rises for the game-winner. And... Anthony Davis gets a piece of it, the ball never gets to the rim, a few seconds later the buzzer sounds, and suddenly I'm rushing out of Rupp Arena as the whole building shakes. Kentucky wins.

On the way out I'm speechless, sorta shell-shocked. Meanwhile, Kentucky fans keep high-fiving me in my Carolina jersey. Not in an obnoxious way, which almost makes it worse. They all look me in the eye and say something like, "Congrats man, that was a hell of a game."

Whatever. It's no consolation. Carolina should have taken a timeout. That last play made no sense. The ball belongs in Harrison's hands there. He's hit too many big shots for Carolina to have them give it to anyone else with the game on the line.

I rush out of Rupp and walk a few blocks to the rental car with the three Kentucky fans who invited me down for the weekend. We're on a flight out of Louisville that leaves in two hours. This has been a quick, 24-hour trip to Lexington that's almost over.

"Yeah, I'd say that was worth the trip," one of them says.

"That was... Man, that was as good as college basketball gets."

I'm not answering them, and I'm certainly not thinking about how great that game was, or how lucky I was to have witnessed it. I'm not thinking about Carolina and Kentucky, and how rare those teams are in today's college basketball. How they're probably the two greatest programs in college basketball's past and present and maybe future, and how this rivalry will only get crazier as the rich get richer.

No, I'm just thinking about what that Kentucky fan said before the game. And like any selfish boxing fan after an epic heavyweight battle, I'm already thinking about a rematch. 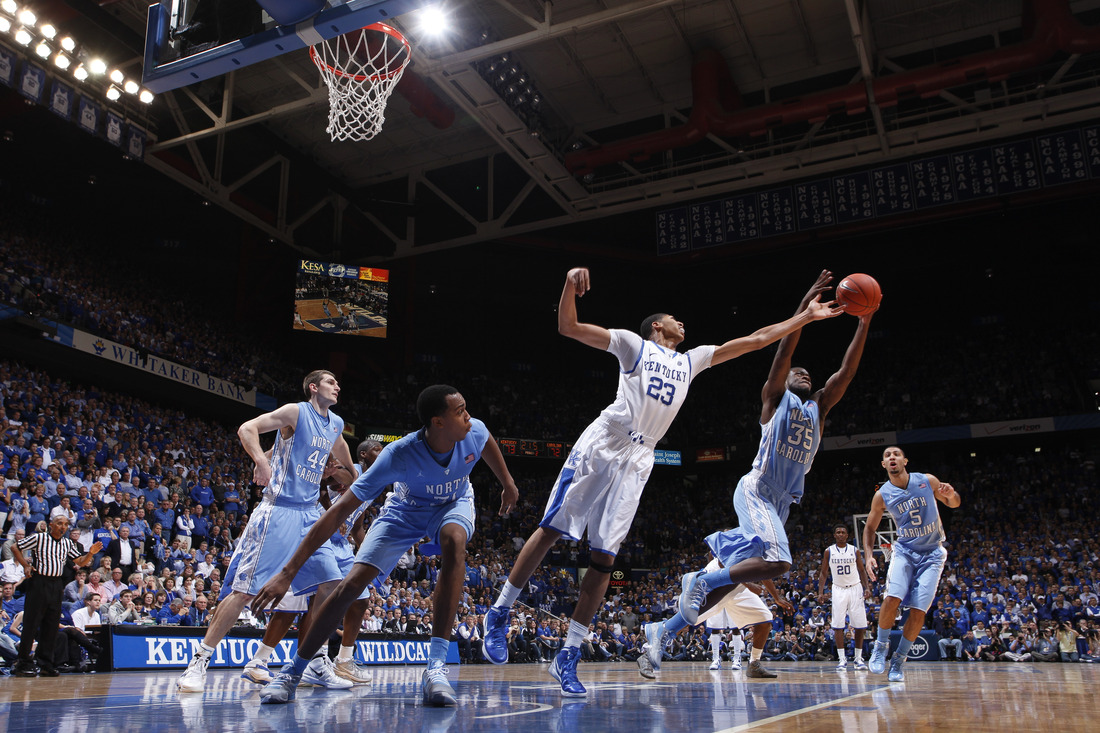