Facing his old team for the first time since leaving in 2007, Bob Huggins led West Virginia to a double overtime victory over former assistant Frank Martin and Kansas State.

The week of overtime continues. It's like "Shark Week," except people actually watch the programming instead of just talking about it.

It was your classic case of teacher meets pupil and teacher knocks pupil from the ranks of the unbeatens Thursday night in Wichita.

After an ugly (and that's an adjective bolstered by my unrivaled holiday spirit) initial 38 minutes or so of basketball, West Virginia and Kansas State went back-and-forth for the final few minutes of regulation and two overtime periods before the Mountaineers ultimately prevailed, 85-80. The loss was the first for the Wildcats, who dropped to 5-1.

The win was especially tough to stomach for a K-State fan base still a bit hurt by the way WVU head coach Bob Huggins left the program in 2007 after just one season on the job.

"They ought to be happy I left," Huggins said before the game. "Frank (Martin) has done an unbelievable job. Some people were upset. That was the initial reaction. Let’s be honest. I left behind Frank, Dalonte, Brad [Underwood] and Andy [Assaley]. I could have taken them. I could have probably taken the players, too. It was the right thing to do. Kansas State was great to me. I loved the people there."

Kevin Jones played the role of hero for the Mountaineers. He finished with a game-high 30 points and his three-pointer in the closing seconds of regulation sent the game into overtime.

In addition to his big shot at the end of regulation, Jones' jump hook with less than 30 seconds to go in the second overtime broke an 80-80 tie and ultimately proved to be the game-winning score. He added 12 rebounds to go with his 30 points.

Jack Cooley, Notre Dame - The Luke Harangody look-alike went for 22 and 14 in an 87-78 win over Maine. Eighteen of his points came in the second half.

Jeremy Lamb, Connecticut - Scored 18 points to go with seven rebounds, but his next-level skill was what really stood out against a good Harvard team lacking NBA bodies.

IMAGE OF THE NIGHT: 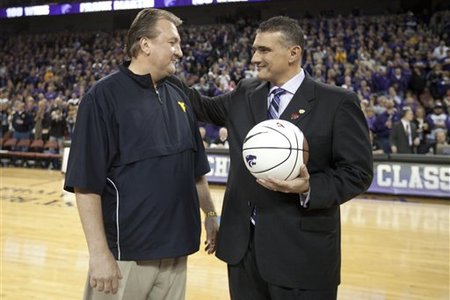 If they had anyone other than one of Huggins' adoring former assistants patrolling the sidelines, I'm pretty sure the folks at K-State would have been fine with seeing this occasion come and go without a commemorative basketball presentation at midcourt. It wasn't that great of a year.

When something bad happens to Kansas State and Martin calls timeout, going with a distant camera shot is the better play.

1. The game of the night between Connecticut and Harvard lived up to its billing for about 28 minutes or so, then the Huskies flexed their muscles and put away the lingering Crimson. Harvard's good enough to win multiple games in the NCAA Tournament, but this was simply a poor matchup for them. It's a shame since this was their only real opportunity to make a splash on national television before March.

2. The hits keep coming for St. John's, as starting guard Nurideen Lindsey has decided to transfer at the end of the semester.

"I came to St. John's for a couple of reasons. One was to be close to my mom, whose health has been up and down due to some past experiences. The second was to play for Coach Lav," said Lindsey in the statement. "In both instances it has not worked out how I envisioned."

Right, it didn't work out because he's recovering from prostate cancer surgery. Impatience is becoming a plague.

3. In what still feels like it should be a Big East game, Providence beat Boston College 64-57. I have nothing further to add.

4. VMI bounced back from a 27-point loss to Pitt by turning Central Pennsylvanie College over 32 times in a 109-86 victory.

5. If Tommy Amaker and company had been able to pull the upset last night, Harvard would have become the first Ivy League team to start a season 9-0 since the 1969-70 season.