The Big Ten Reaffirms Its Relationship With Baked Potatoes

Share All sharing options for: The Big Ten Reaffirms Its Relationship With Baked Potatoes

Well, of course the Big Ten basketball tournament had a baked potato bar. 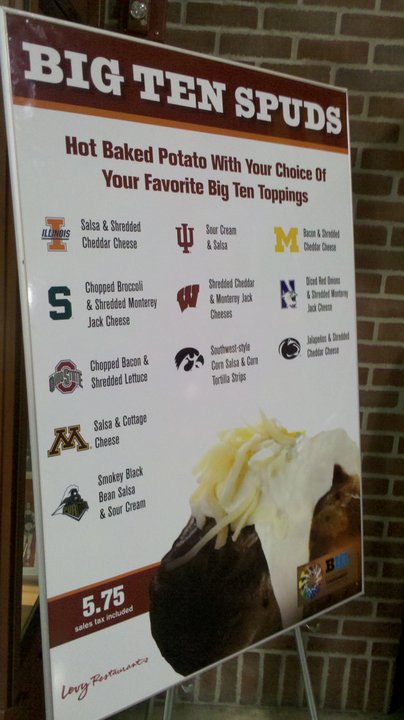 Like their unique mascots and rivalry trophies, each school has a signature baked potato that students at the Big Ten's august collection of institutions have enjoyed for generations. Let's review them all!

Illinois: Salsa and shredded cheese. The salsa used to be ketchup, but the cheese has always been shredded to represent the hopes of Illini fans in all sports forever.

Indiana: Sour cream and salsa. This is the Big Ten's idea of a joke, as everyone in Indiana thinks salsa is ketchup. The sour cream represents the Hoosier State's unique blend of boredom and bitterness. The ketchup is there by default.

Michigan: Bacon and shredded cheddar cheese. Michigan is the bacon of football programs, after all: rich, delicious, and at the moment, dead.

Michigan State: Chopped Broccoli and Monterey Jack Cheese. The broccoli represents the green of the Spartans uniform, and the Monterey Jack is one of the few cheeses that can safely be eaten by migraine sufferers, a term that applies to anyone following Michigan State football, at least.

Northwestern: Diced Red Onions and Shredded Monterey Jack Cheese. The hardest combination on the breath, but Northwestern fans aren't getting close to anyone after the game anyway.

Ohio State: Chopped Bacon and Shredded Lettuce. Woody Hayes says you better take that green liberal crap off the top before he punches it off and double down on the pig strips with a quickness, pal.

Penn State: Jalapenos and Shredded Cheddar Cheese. Joe Paterno brought the tiny, powerful peppers to the New World himself, so you damn well better put them on his baked potato.

Minnesota: Salsa and cottage cheese. If anyone actually ate this and kept it down, please send video.