Share All sharing options for: Ohio State Basketball Is No. 1, And Jared Sullinger Seems Pretty Great

Ohio State basketball dominated Penn State Tuesday to cement their number one ranking, and as an added bonus, the win helps the Buckeyes clinch at least a share of the 2011 Big Ten title. But as Jared Sullinger told ESPN's Dana O'Neil, the team's not satisfied with a tie.

"It’s like sharing your girlfriend or your husband,’’ freshman Jared Sullinger said. "You wouldn’t want to share your husband, would you?’’

If you don't know Jared Sullinger yet, then this is as good an initiation as any. 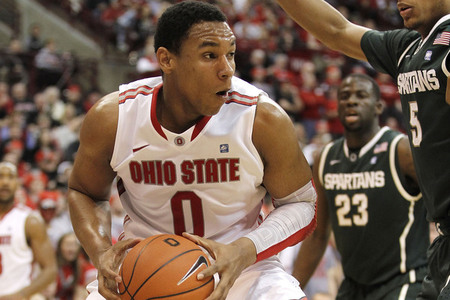 Unlike some Ohio State hoops superstars of the past (*cough* Evan Turner), he's a pretty gregarious character, and one of the better interviews in all of college hoops. So I guess he's more like Mark Titus? I mean, he asked an ESPN reporter if she'd like to share her husband. In the words of the immortal Bill Raftery...

Also, for what it's worth, he's the best big man in America, and a likely top five pick in next year's NBA Draft, so you should get used to hearing his name.

It's kind of funny with big men. They tend to either have no personality whatsoever, or some of the biggest personalities around. Even Greg Oden (former Buckeye), who looks 45 years old and moves like he's dealing with severe arthritis, has a great sense of humor, and is always game for a good quote. On the other hand, there are lots of Bill Russells throughout history, and a lot guys are like Chris Bosh, who just don't talk.

So if we grant that big men are either Tim Duncan or Shaq, then let's all be grateful that Sullinger seems more like Shaq. Asked to describe his teammate Jon Diebler going 10-12 from three point range, Sullinger told ESPN simply, "I wish I could curse right now, because I don’t know how else to explain it.’’

And in a year when there's been no clear number one, Jared Sullinger's Ohio State team is the squad that seems worthy of the distinction, and as we get closer to the tournament, they're looking more and more like the team to beat in March. As a fan of awesome athlete quotes and goofy-looking big men that refuse to take themselves too seriously, I say Go Buckeyes.