St. John's held on to beat Rutgers 65-63 in the second round of the 2011 Big East Tournament, with the last few seconds packed full of questionable calls. The one that's going to get the most attention: St. John's' Justin Brownlee stepped out of bounds with 1.7 seconds left, yet the clock didn't stop. He even traveled before stepping out and threw the ball with time left. Any of these events should've resulted in Rutgers ball near half-court with a chance to tie or take the lead. 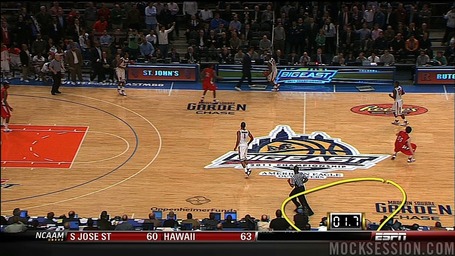 These things happen, but a couple of them just happened in the favor of the home team.

For more on this game, St. John's fans should join Rumble At The Garden, and Rutgers fans should head to On The Banks.

For more on the 2011 Big East tournament, stay tuned to this StoryStream and join SB Nation Indiana. Browse our 295 team blogs for a community devoted to your school, and visit our NCAA basketball hub for more on other conference tournaments.