For their part, Duke's student paper offers a condescending, sarcastic open letter to Kyrie. In other words, exactly what you'd expect.

I mean, what’s there to lose?

Sure, some of the Cameron Crazies will implore you to consider your legacy as a Blue Devil, to remember the history of the great Duke players before you who went on to successful NBA careers. They’ll probably name drop the likes of Carlos Boozer, Grant Hill and Shane Battier, all guys who won NCAA titles before noteworthy careers in the pros...

Don’t follow in the footsteps of William Avery, you’ll be warned... Don’t let those comparisons get you down, though, even if Avery did get the privilege of watching from the sidelines as his former college teammates celebrated a national championship. 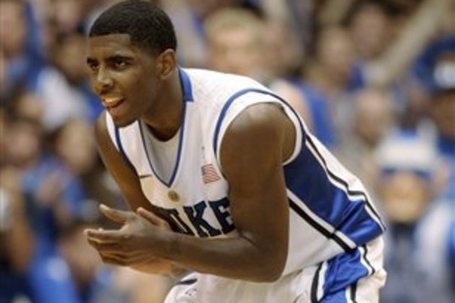 Not "seriously" like the Duke paper means. Nobody's trying to be super clever and hilarious here. Just... Seriously. Do you really want to spend another 12 months surrounded by these twits?

Just as fast as Jennifer Taylor can tell Elton Brand he "not only insulted the current students who are putting in four years at a school they love, but also the thousands of alumni who have realized the value of a Duke education," tell the Duke Chronicle to kiss your ass.

They don't care about you. They care about what you can do for them. Look at how easily they drag out William Avery's failed pro career for their own amusement. What a bunch of pompous idiots. "If you asked Christian Laettner, he would tell you that fans don’t remember collegiate legacies anyway," they say, guffawing at the idea that anyone could NOT remember Laettner in college.

...Are these really the people you want to surround yourself with?

And just for the record, if you're going to ask Laettner about the value of college legacies, go ahead and ask Chris Duhon how much the NBA cares about them. Duhon would have been a lottery pick after his freshman year. When he finally went pro, he fell all the way to the second round.

But hey, at least he made all those CRAZY Duke fans happy!

Anyway... We all look forward to seeing you in the league. It'll be fun to cheer for you, just as soon as we can do it without cheering for Duke. For now, do what's best for you, and that's cool with me.